Today is Laurie's Annual Valentine's Day Party at http://bargainhuntingwithlaurie.blogspot.com/. Please join us! I almost did not join because I was setting up the tables for a party with my friends on Valentine's Day but I wasn't quite ready for the big day. But being the party goer that I am, I did not want to miss out so why not just set a temporary table for 2? After all, it is more romantic that way and Valentine's Day is all for lovers and romance, isn't it? 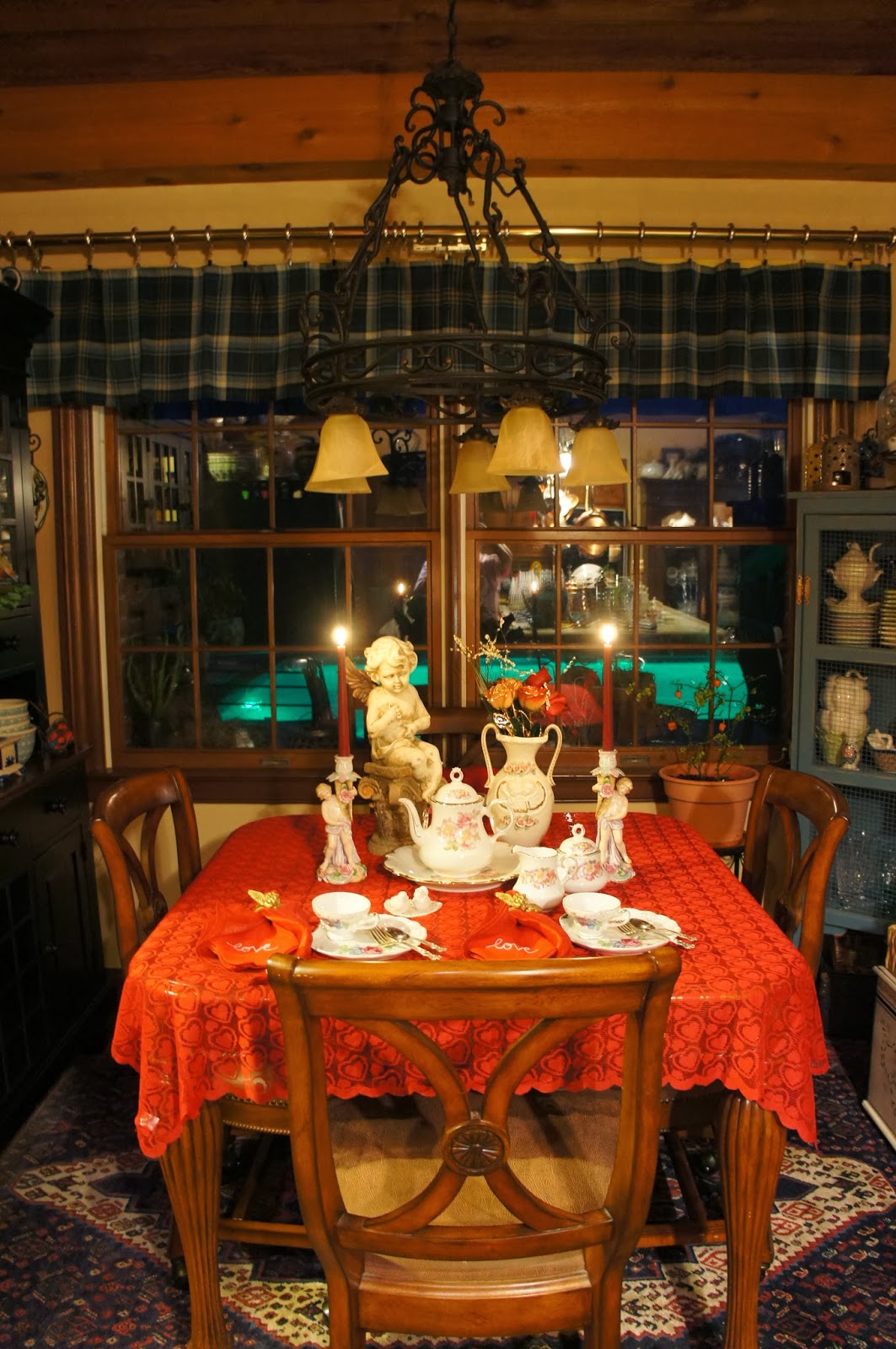 So, here it is! Starting with a red lace table cloth with hearts all over it, I laid some pieces which I thought would look romantic. I thought of using my cherub since cupid is a cherub. He resides indoors though I think he might be more for the garden. 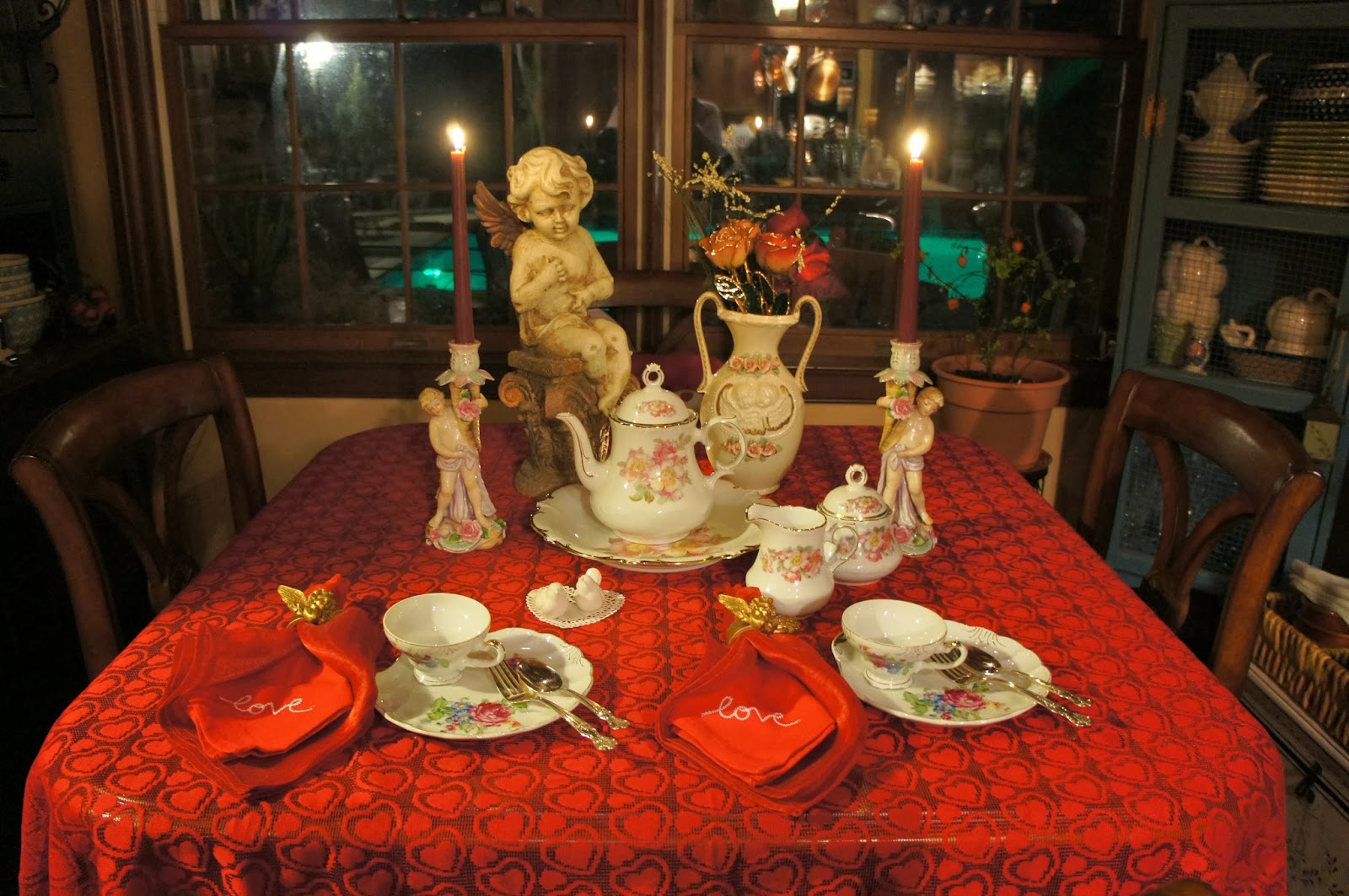 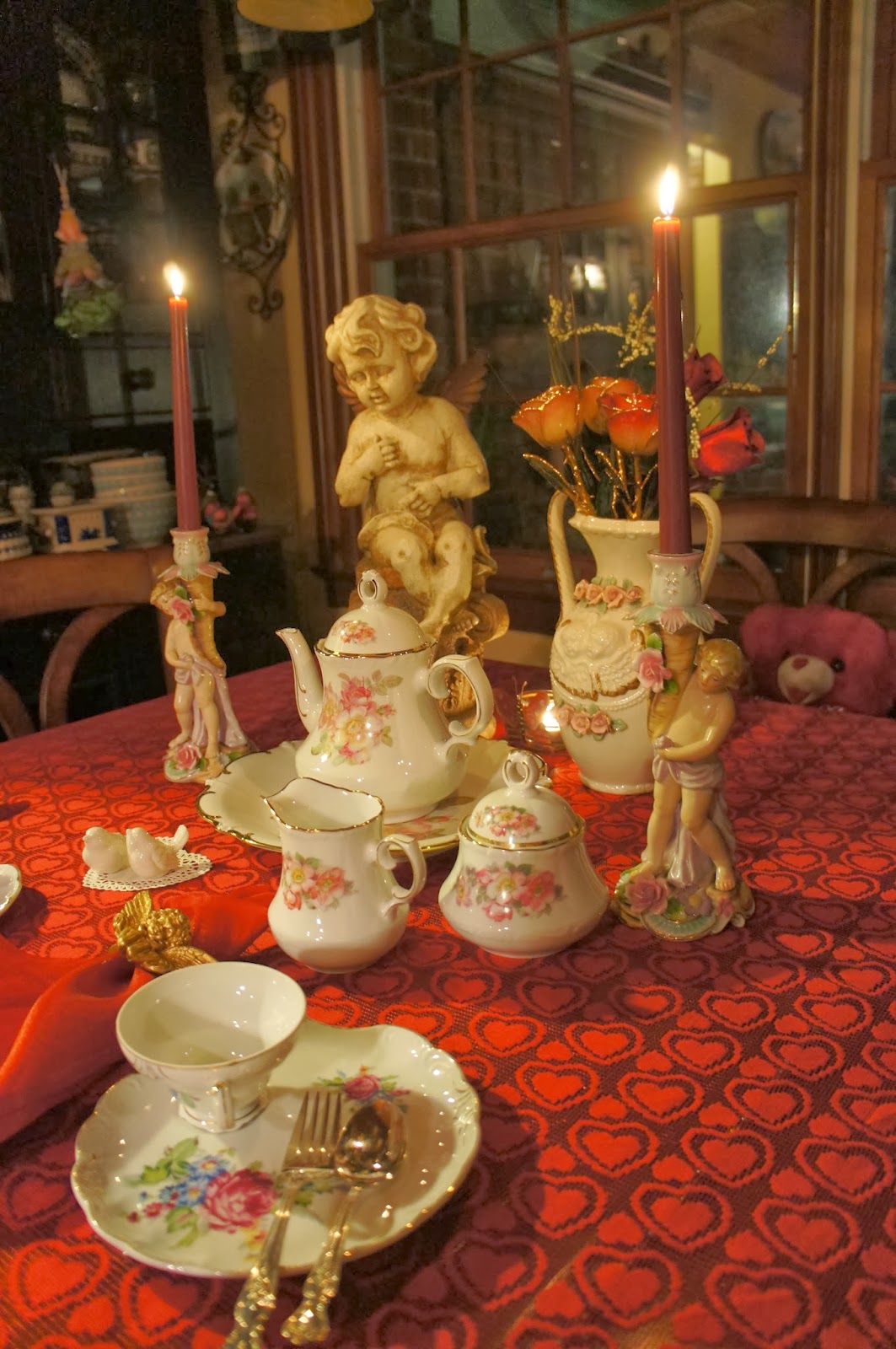 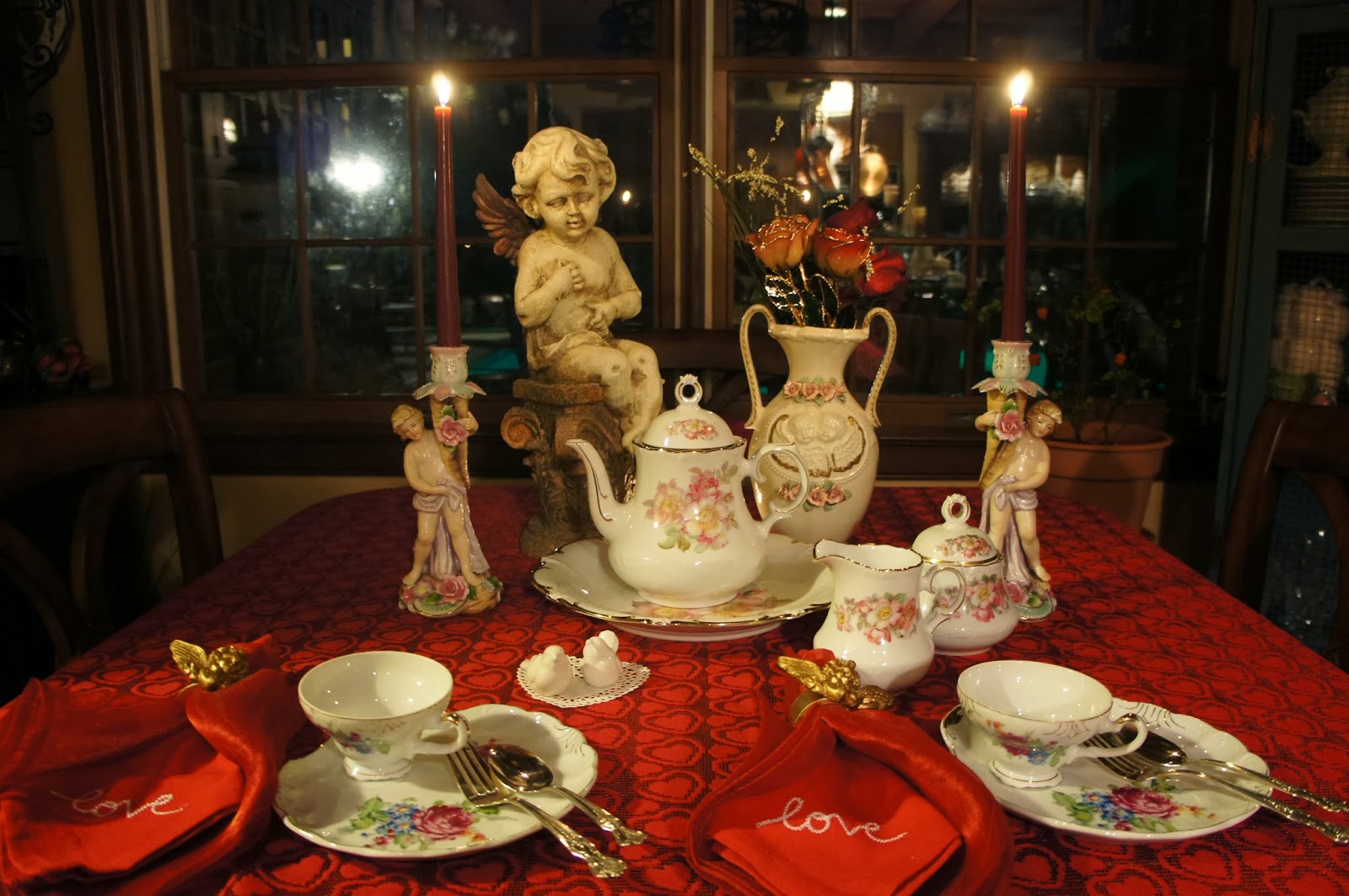 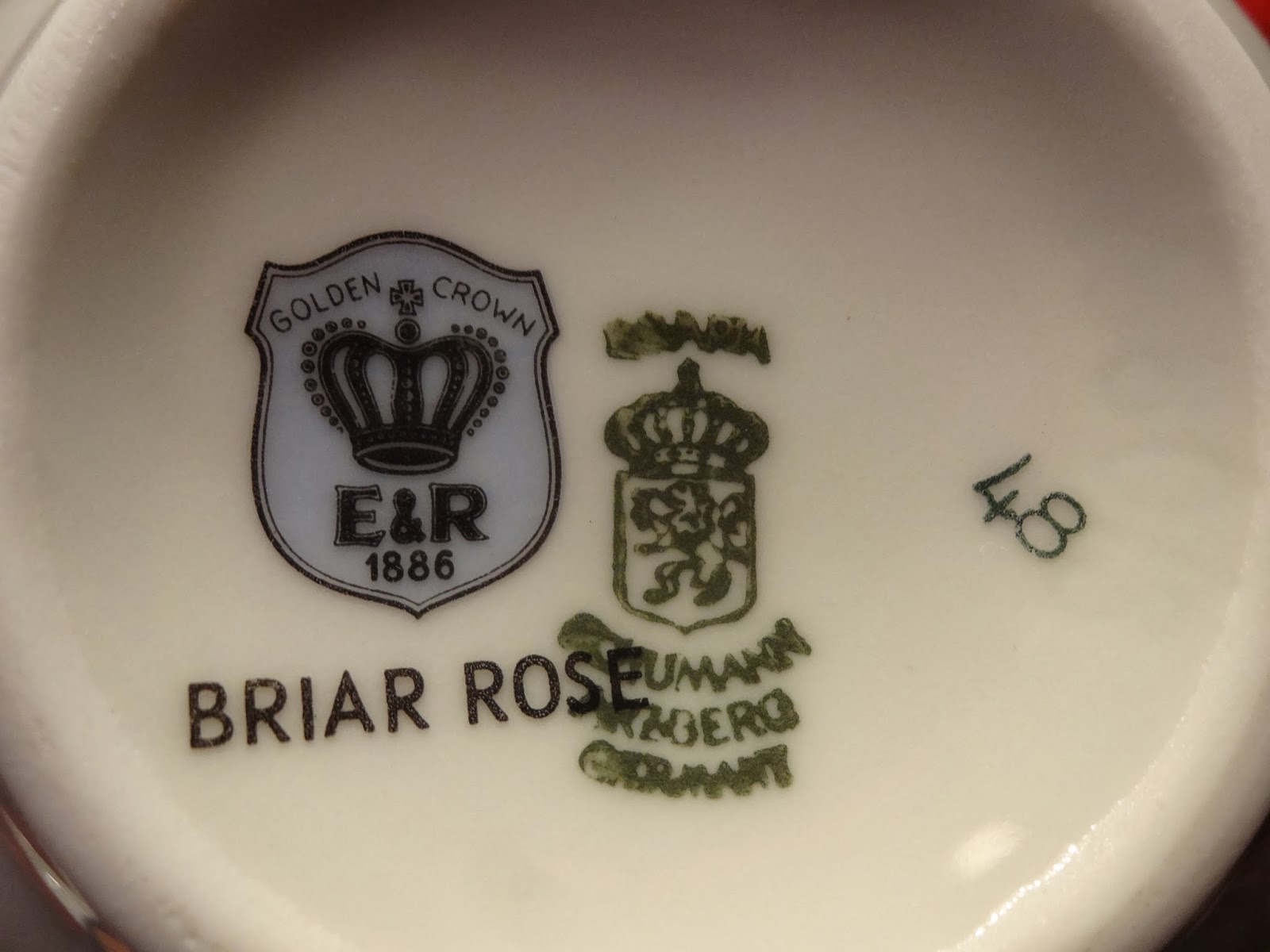 The tea set is "Briar Rose" 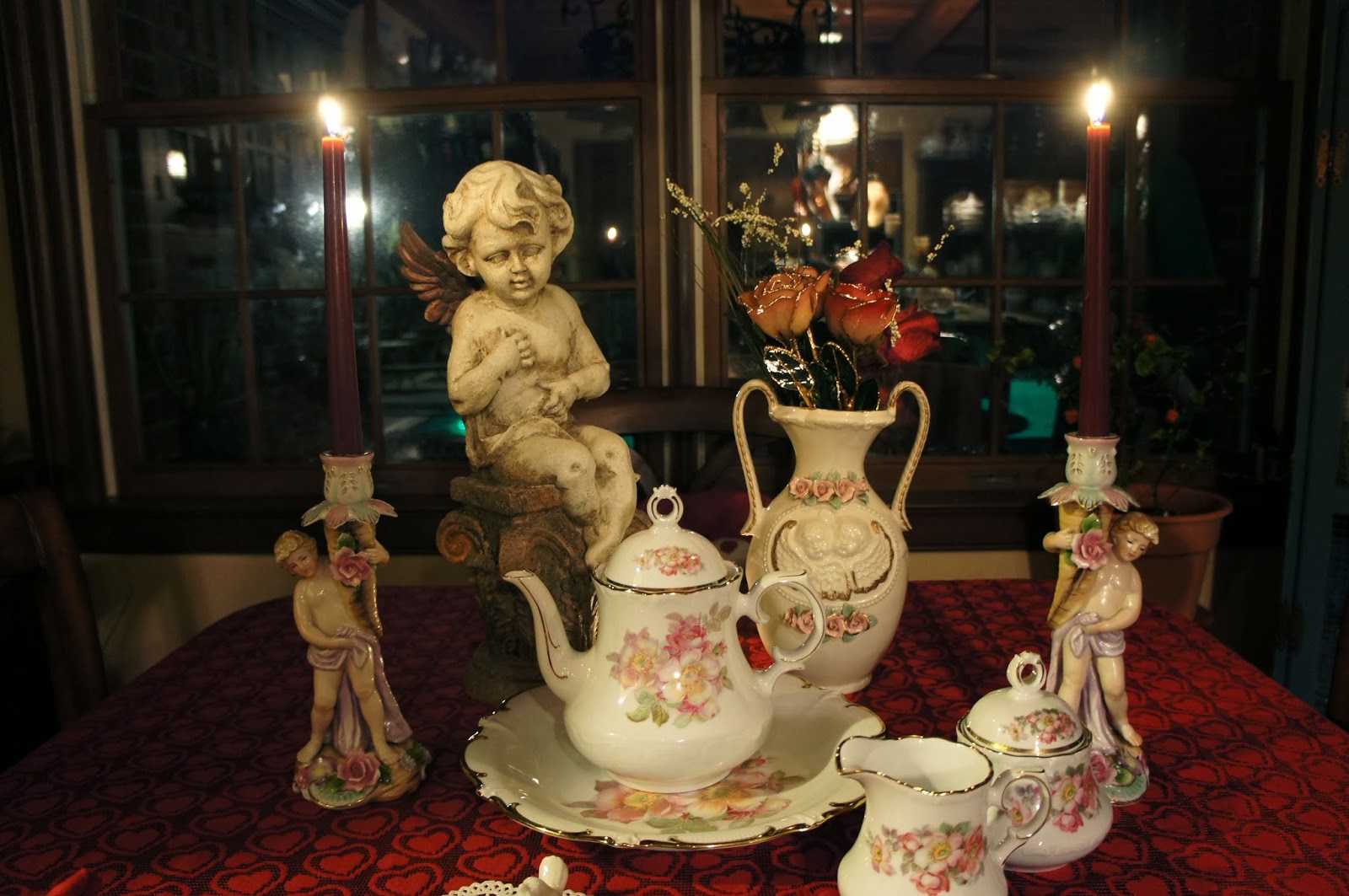 John gave me these three preserved roses in past Valentine and anniversary days. 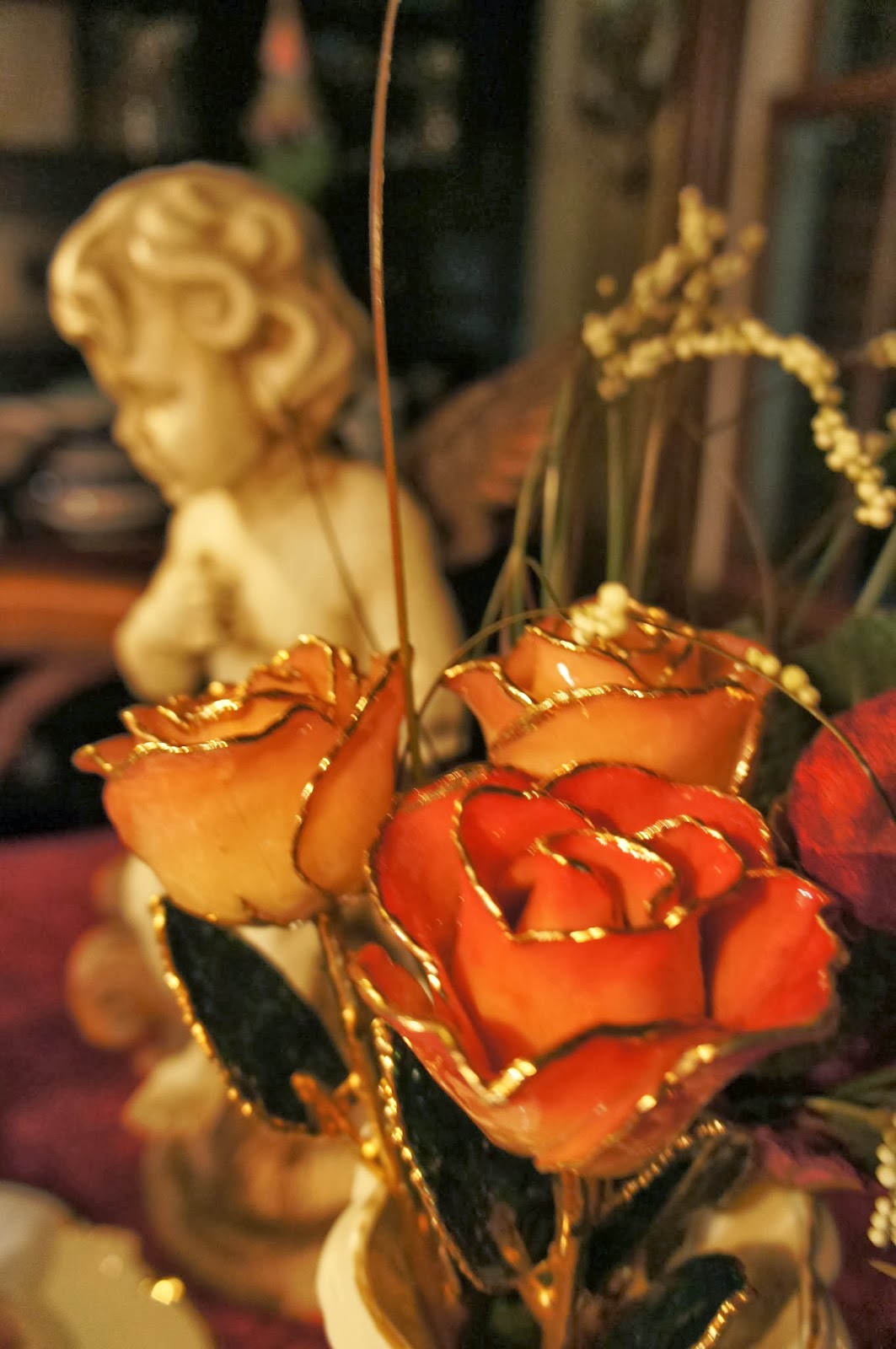 These napkins were already on the formal table I was setting up in the living room and I just borrowed them, lol. The flatware set is made by Wm. Rogers. I won the tea cup and snack set (it is a service for 8 but I only used 2 here) in an antique store drawing downtown. 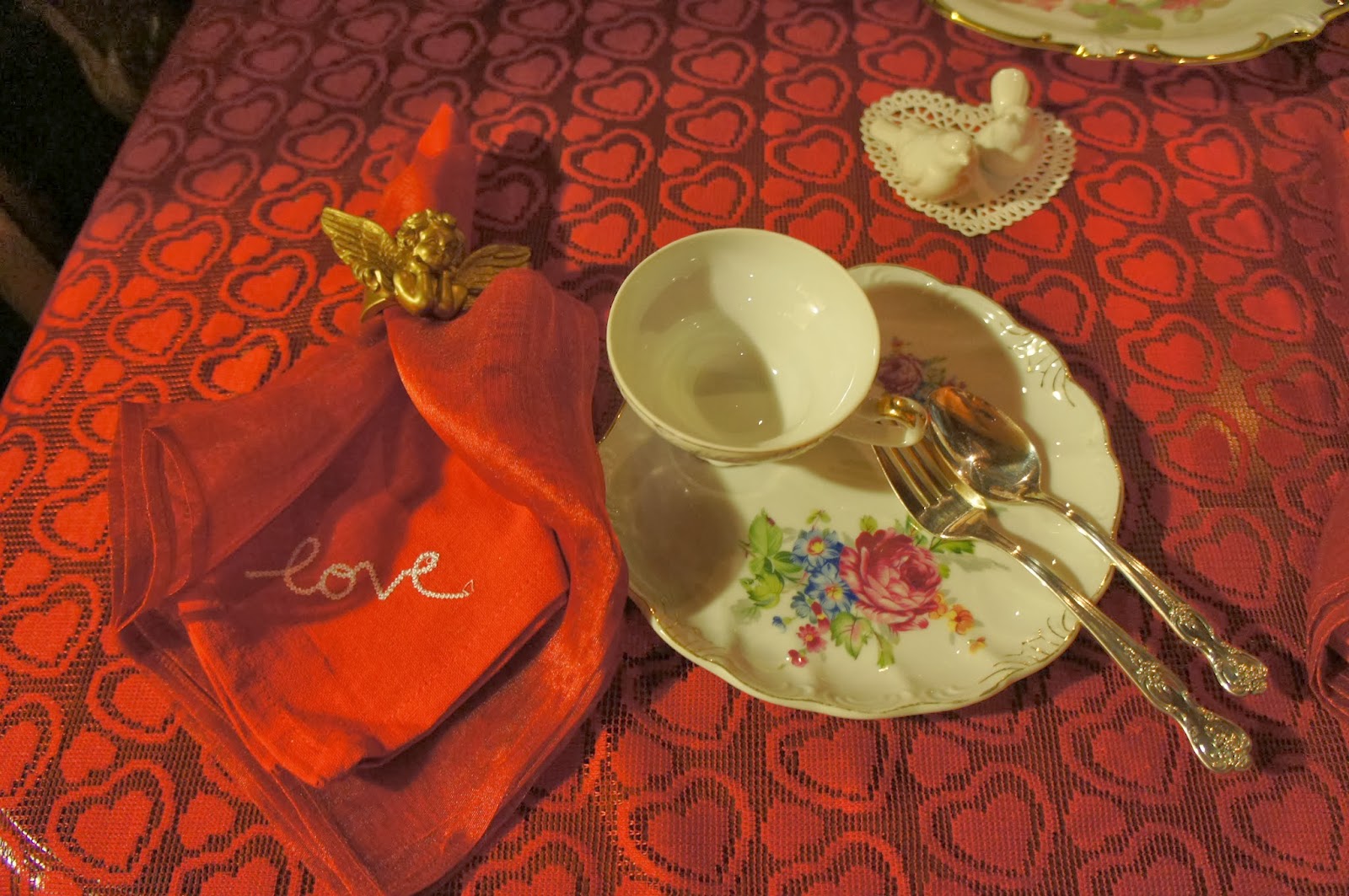 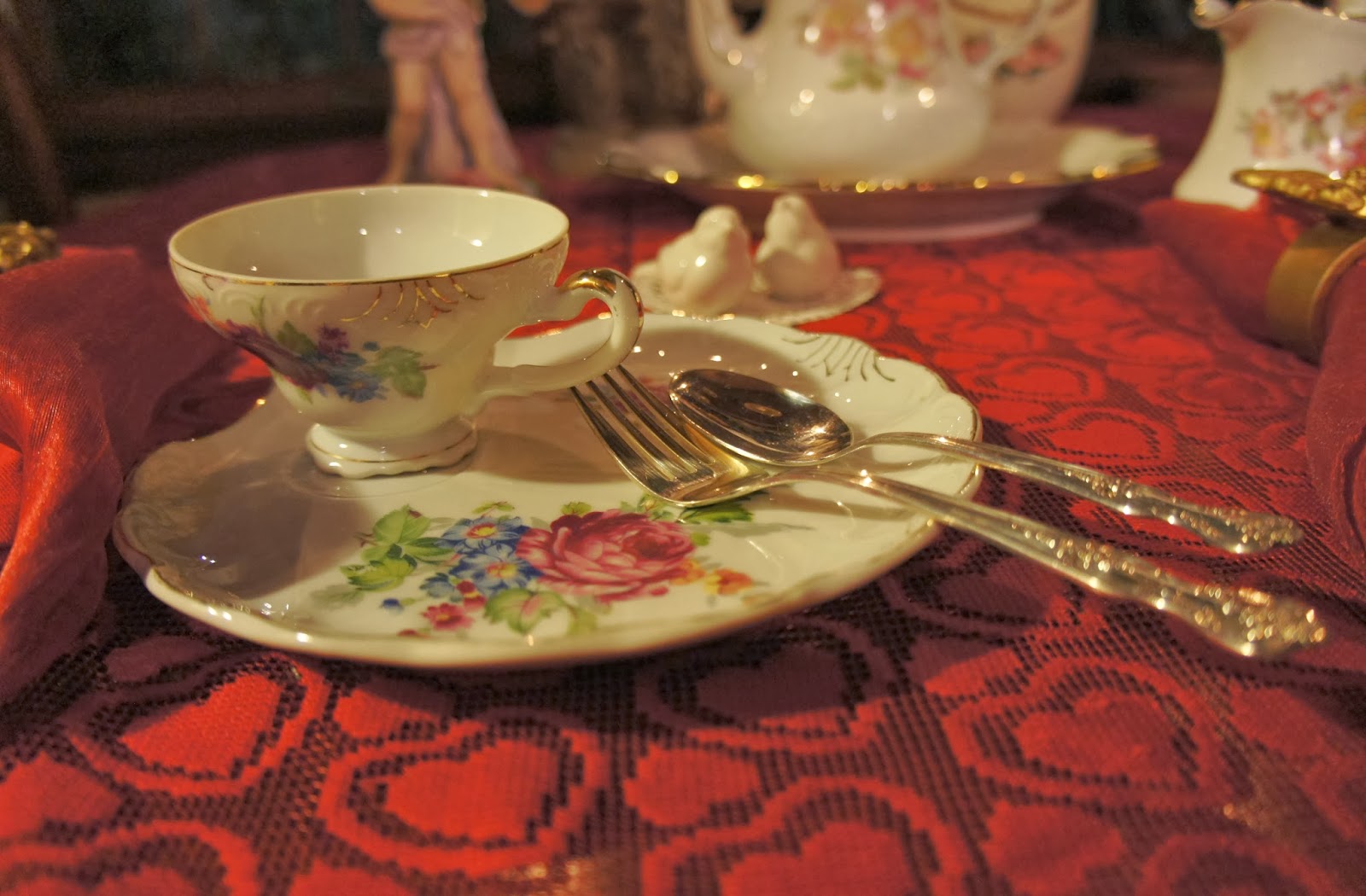 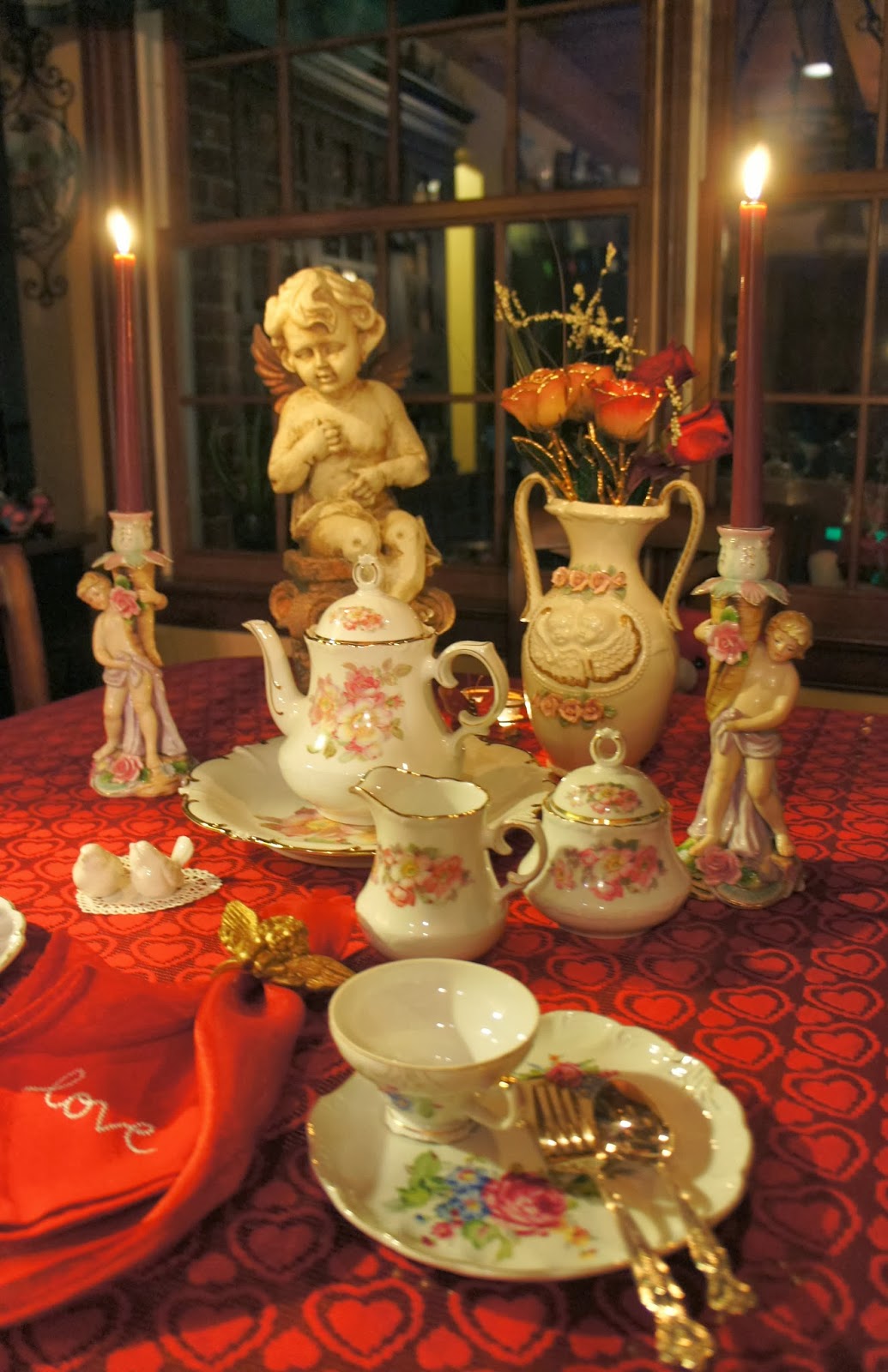 John must like stuffed animals cause he keeps giving there stuffed teddy bears, lol. I think I am too old for them but I keep them anyway. 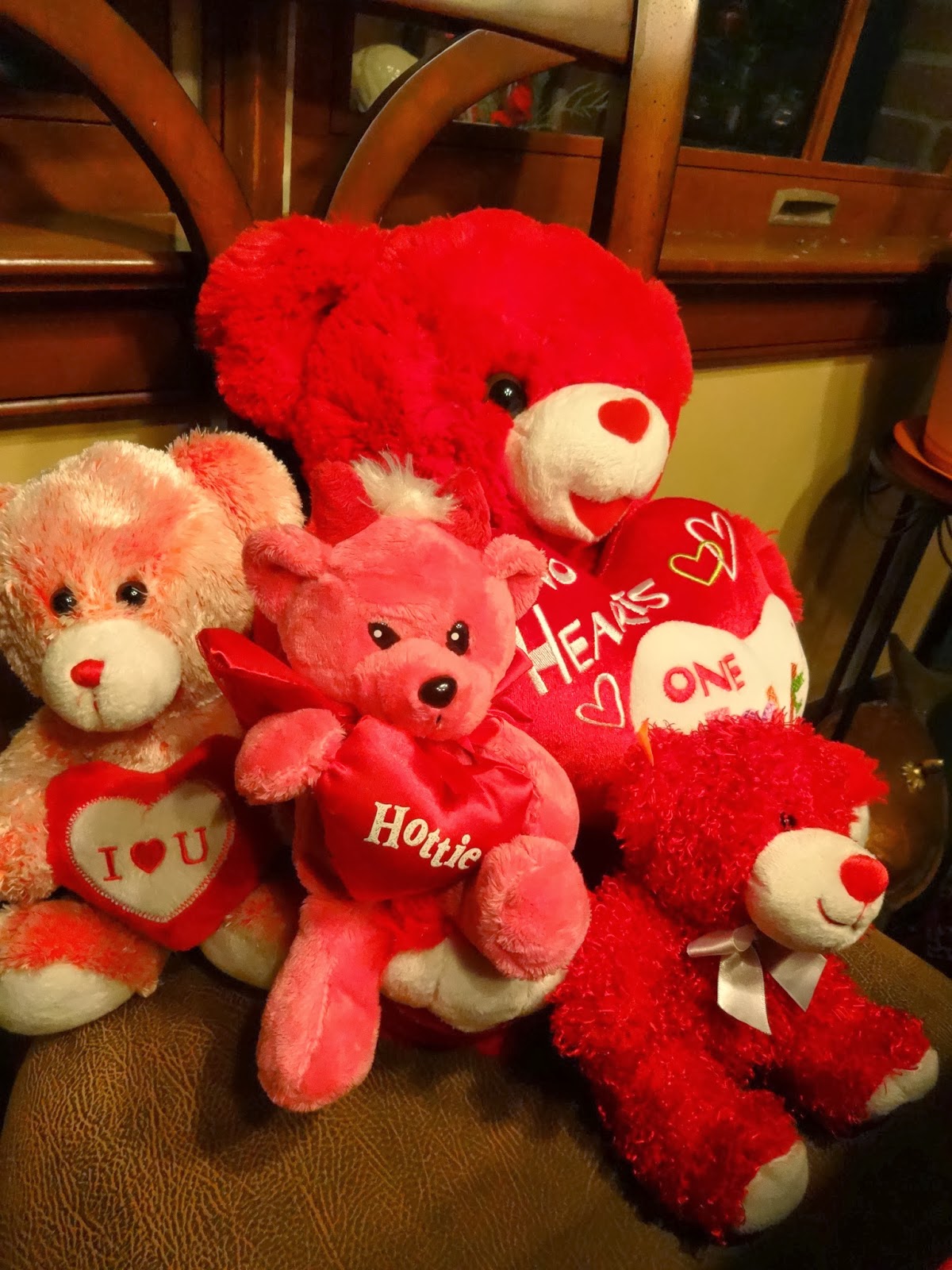 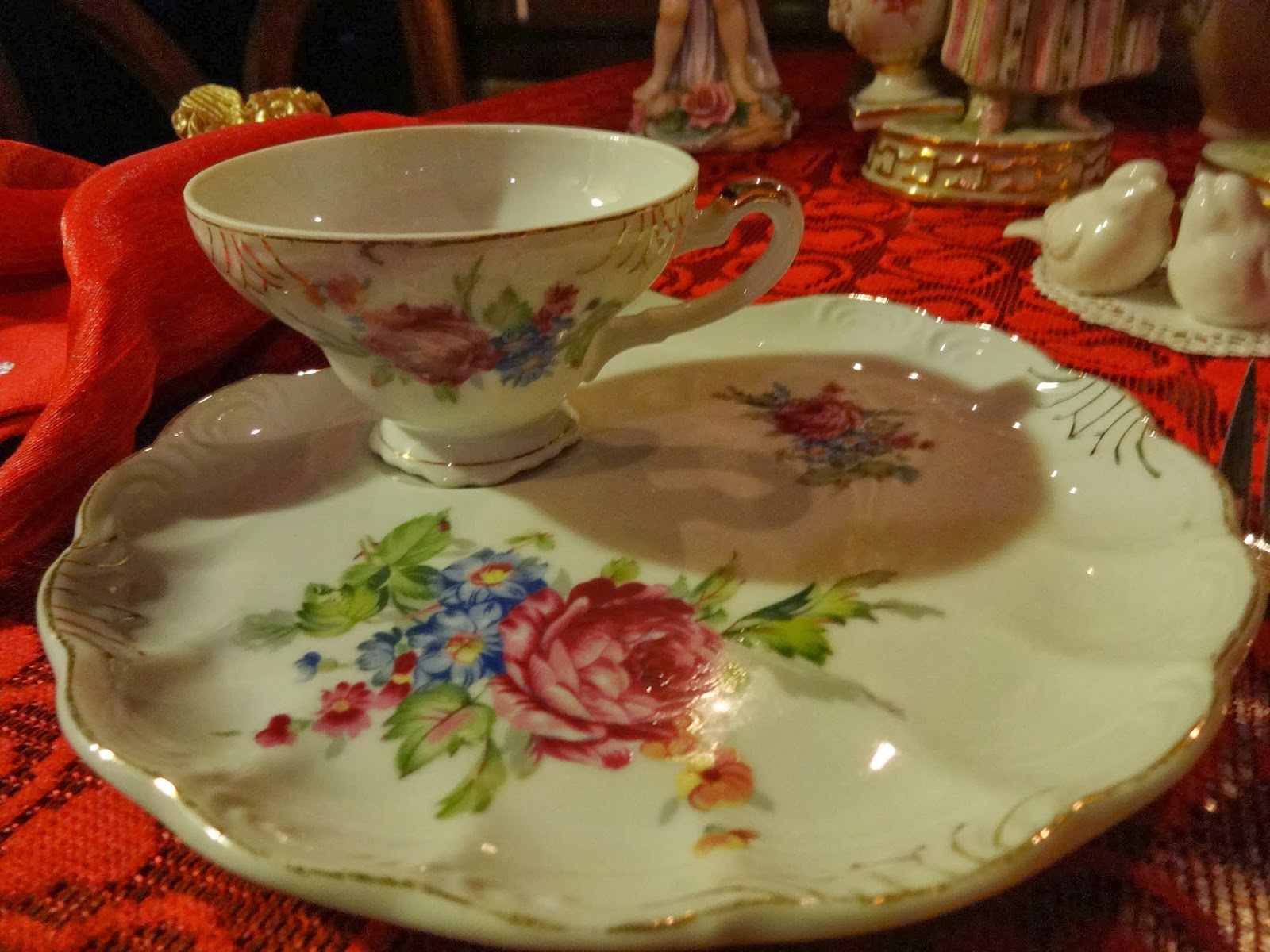 Beautiful Valentine setting for a lovely tea party. The tea pot and the snack plates and cups are so pretty. Of course the napkin says it all. Happy Valentine's Day!

I agree why not set up a table for two! Your table looks lovely! Those roses your hubby gave you are gorgeous! Love the china- those candle holders are wonderful.

Those roses are so pretty and love that you can keep them forever. Your table is perfect as always!

Oh goodness my friend, how did I almost miss this lovely and romantic table for two! I love all your tea sets and dishes. The roses from John are very pretty!
Hugs,
FABBY

The cherub is a nice touch,

Christine, I'm so glad you didn't miss the party. your tea set is beautiful, and how wonderful that you won the snack sets with tea cups in a drawing. The cherubs are such a pretty addition to your tea table, and what pretty linens. Thank you so much for linking. laurie

Thanks for being a part of Seasonal Sundays.