A Small Birthday Party For a Friend

We have a very closed knit Filipino group here because there are only a few of us, so we really treat each other like brothers and sisters. We make impromptu plans all the time and this is one of those times. The only Filipino adult guy (there is one teenage boy too) is having his birthday on Sept. 15th and the Friday before that, Riza, who lives about an hour away, was coming to drop off her little girl and she said she will bring a dish to share. So I offered my house to get together for dinner and since Gary's birthday is coming, I decided to just have a little surprise birthday party for him. And that is how this came about, a busy day for sure since there really wasn't any preparation beforehand. 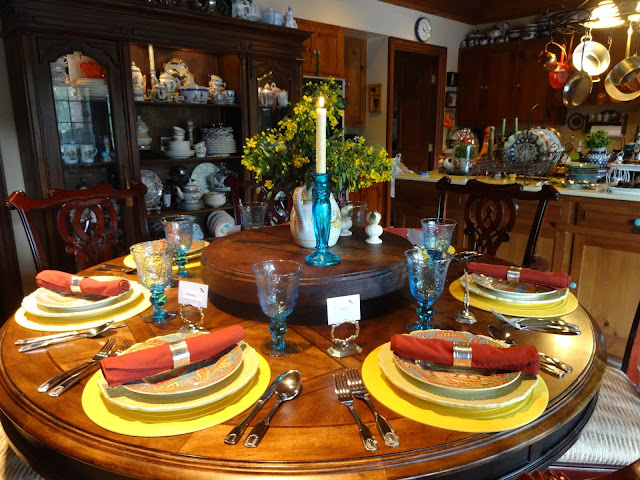 I was organizing the kitchen a little bit when I saw these salad plates in the rack on the kitchen counter. I had forgotten about them and never really used them yet. I thought they would  be perfect for this time of the year. 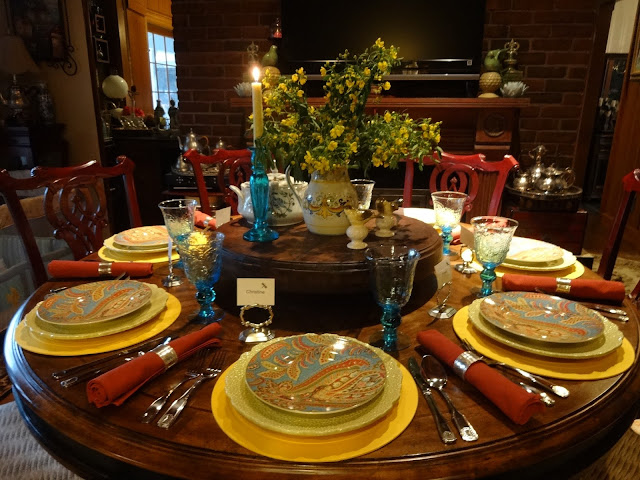 I know I have plain yellow dinner plates so I pulled them out of the dining room French cabinet. The yellow placemats are cheap ones I bought from the dollar store. I planned to take them to Cape Coral to use when dining on the deck since we have yellow chair pads there, but let me use them here first. 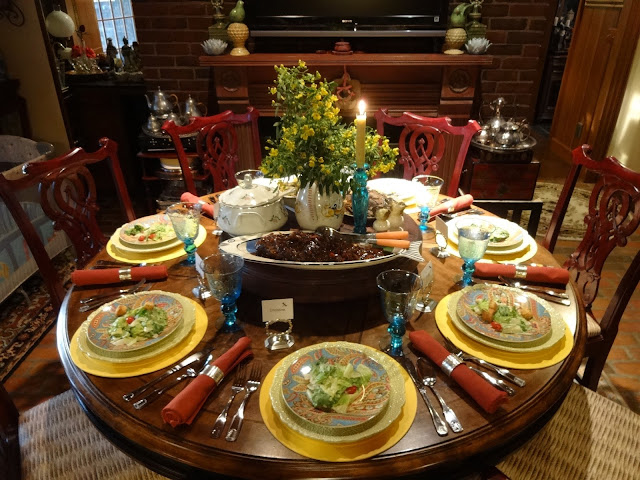 Behind the salad plates are the words written, "222 Fifth Demure Turquoise".  I like the paisley design on them. These are probably my most practical napkins. I bought a dozen of them on Ebay before we moved here and I like how thick they are and how easy they are to care for, no ironing needed. The silver plated napkin rings are from an antique store downtown. I think I paid $3 for 7 or 8 of them. 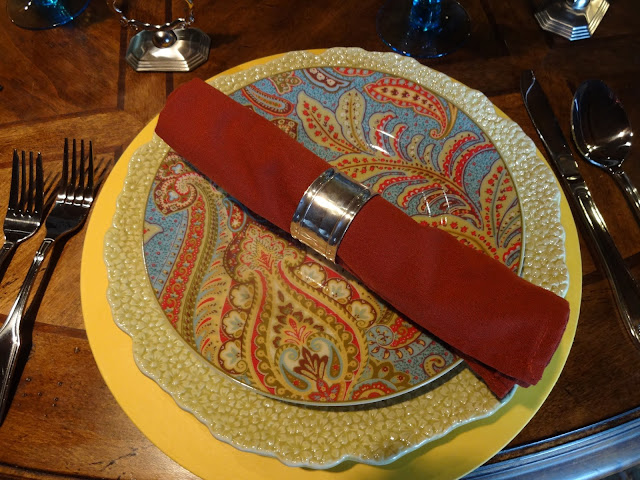 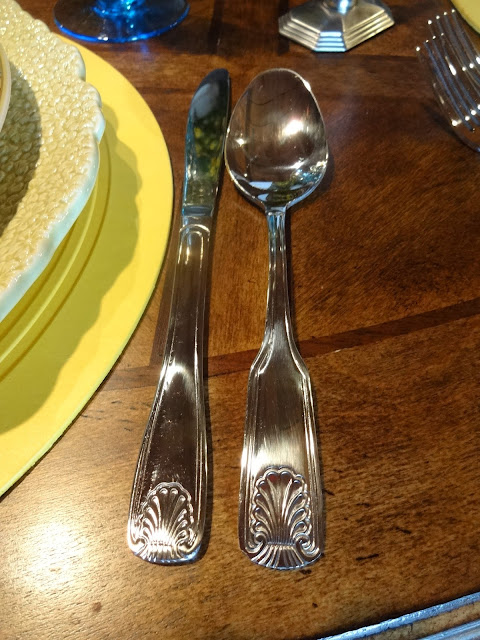 The goblets with fleur de lis on them were from Horchow. I like them very much but I always forget to use them because they are not stored with my other stemware. 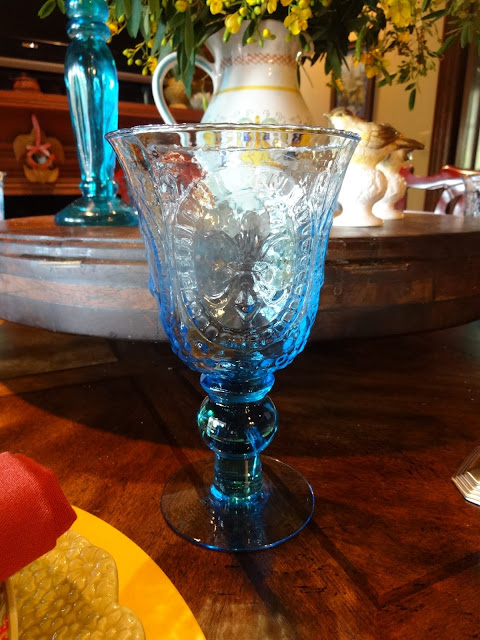 Name tag holders are from Southern Living at Home, which is now Willow House. They can also serve as napkin rings. 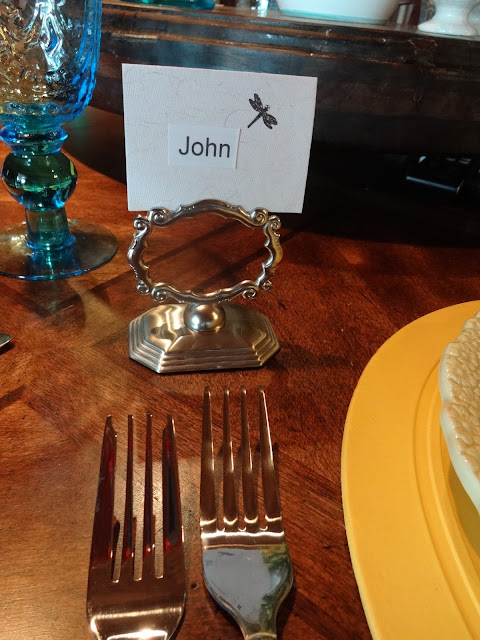 I made a simple centerpiece since I know I was going to serve food on the lazy Susan. I snipped some sunburst from my bush outside which is forever bursting with bright yellow flowers, and just stucked them in an Italian vase. Birds S & P shakers and a blue candlesticks holder, same tinge of blue as the goblets. The covered tureen serves white rice, which is a must for a Filipino meal. 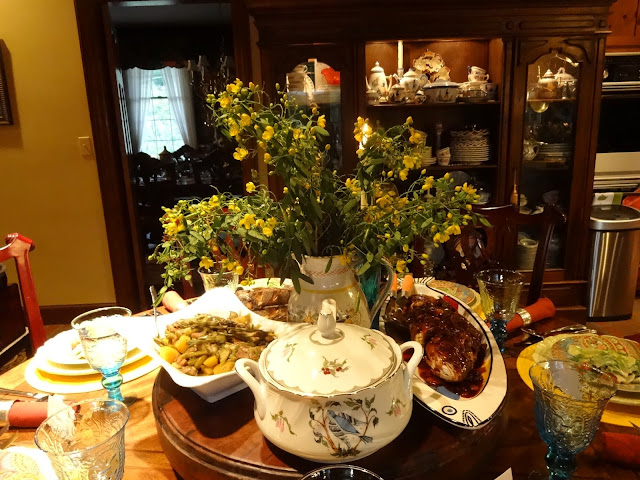 The table for the kids. 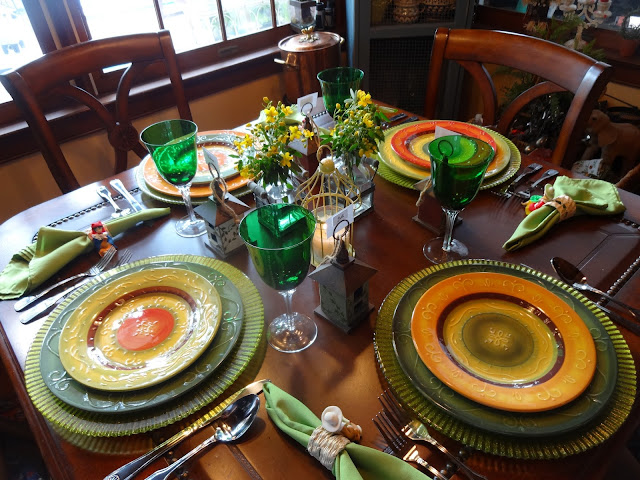 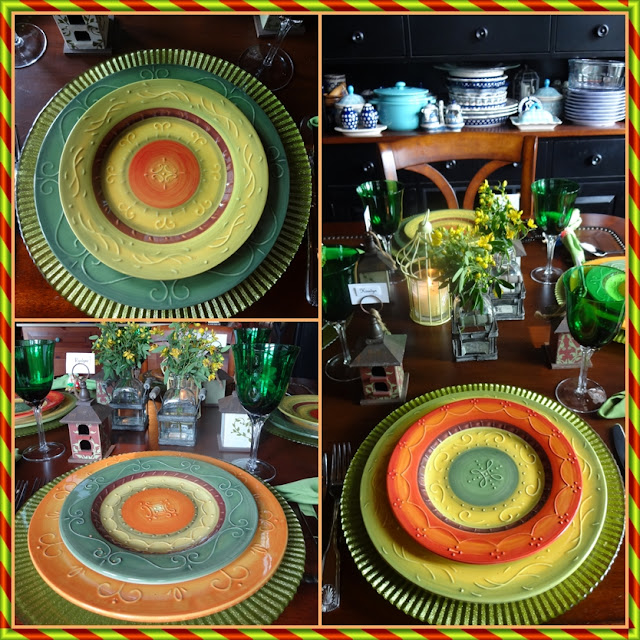 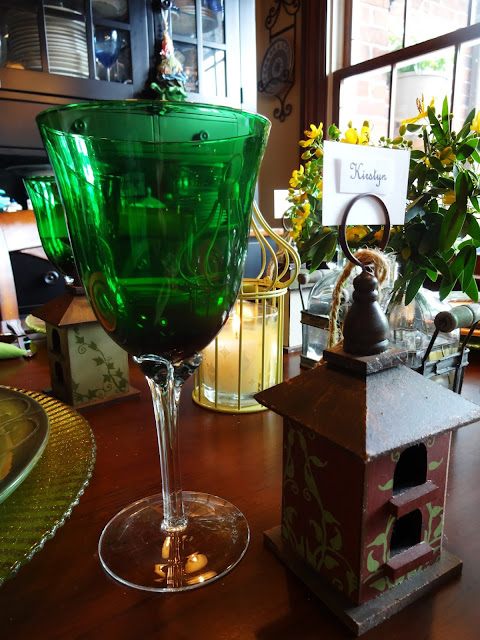 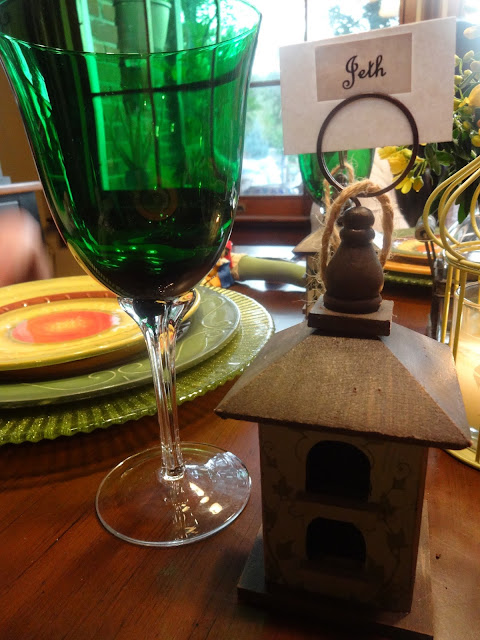 Aren't these  just the cutest napkin ring holders? So appropriate for a kids' table. 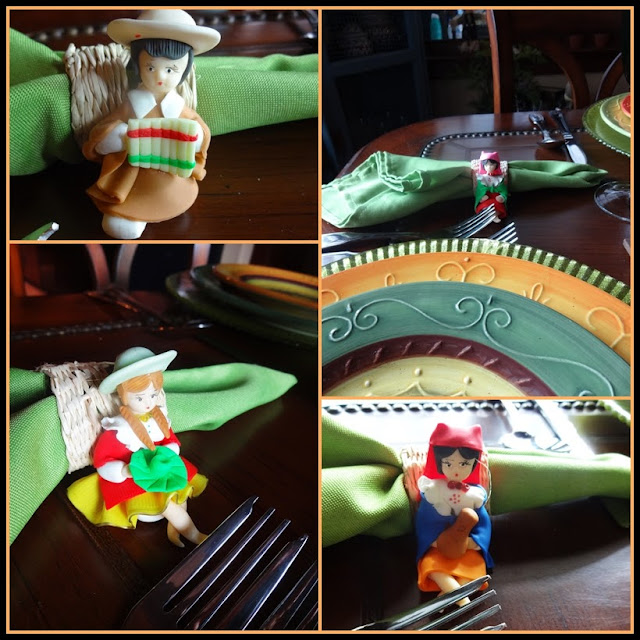 The little yellow lantern I won just by sharing the photo on my FB. 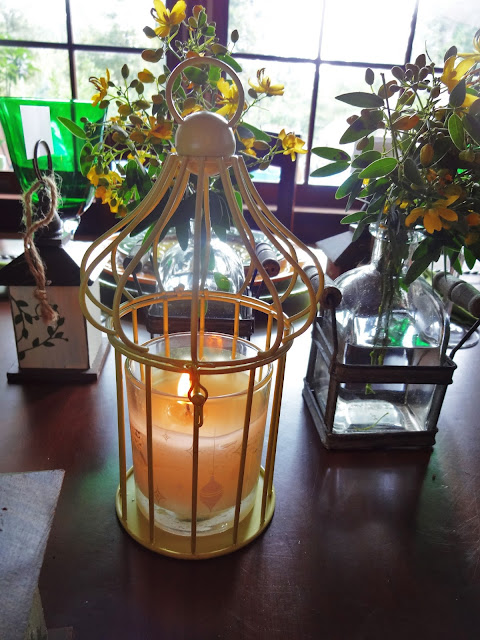 I laid the dessert and tea on the kitchen table. 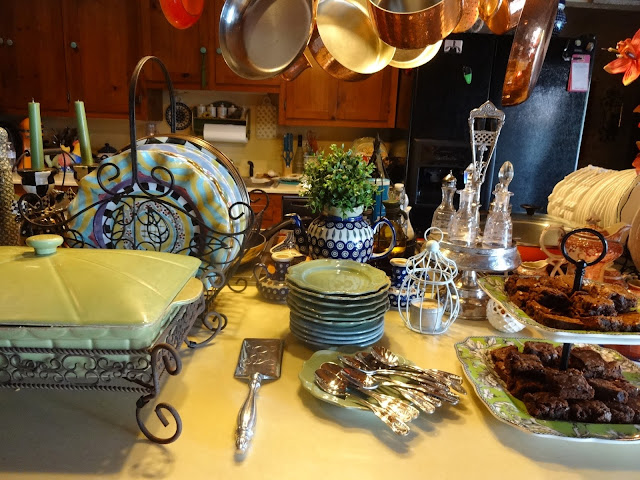 I baked a Coconut Cream Pie, which was so good! I have the recipe below if anyone is interested. 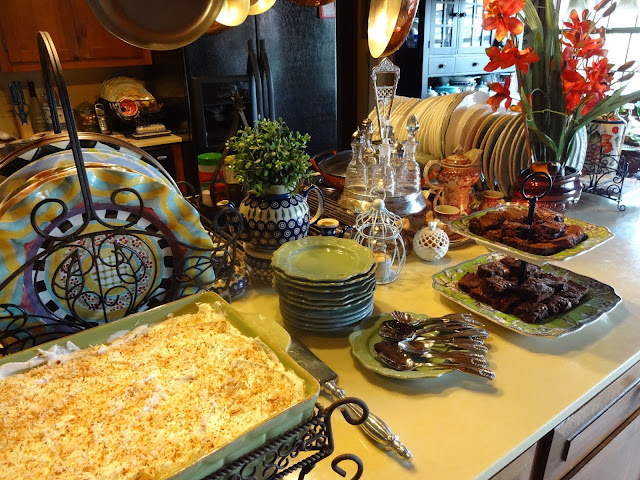 I just bought this pie or cake  server from a store downtown that was closing, for $2.00. It was new, still wrapped. Is that initial a "J"? Perfect for John! I like how heavy it is. 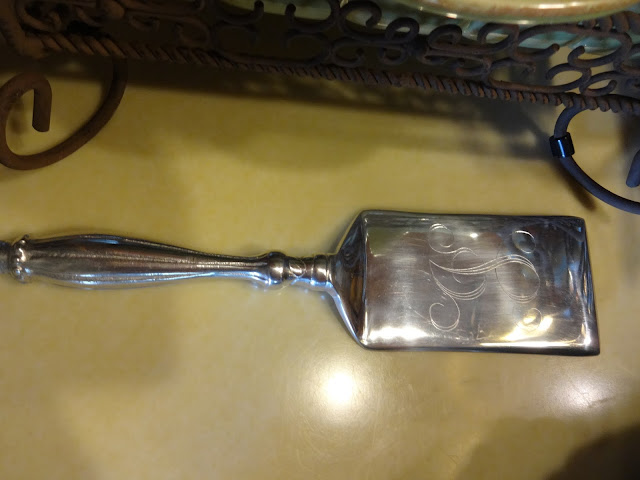 The teapot is also 222 Fifth, "Adelaida green and white". I have cups in the same pattern but I forgot to take them out. I did not have a matching sugar and cream servers so I used another set that blends with it. 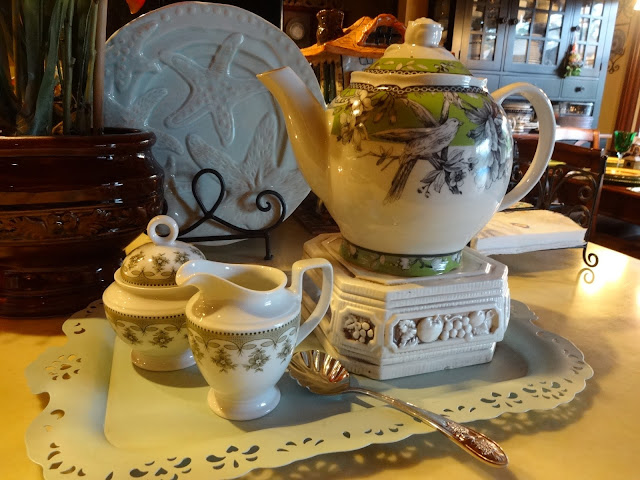 I baked some brownies to drink with our "Pear and Guava" tea. 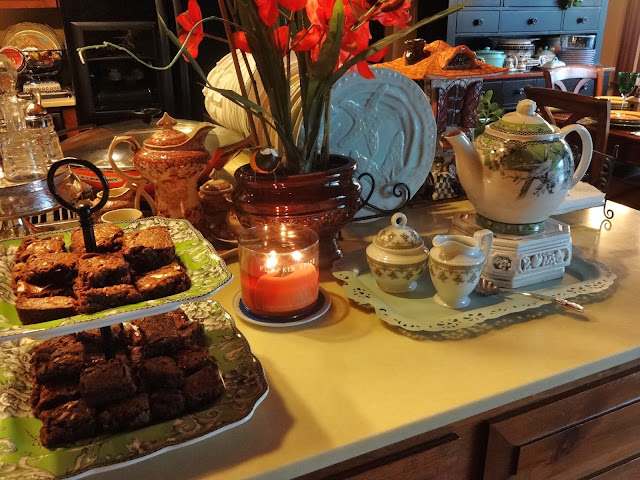 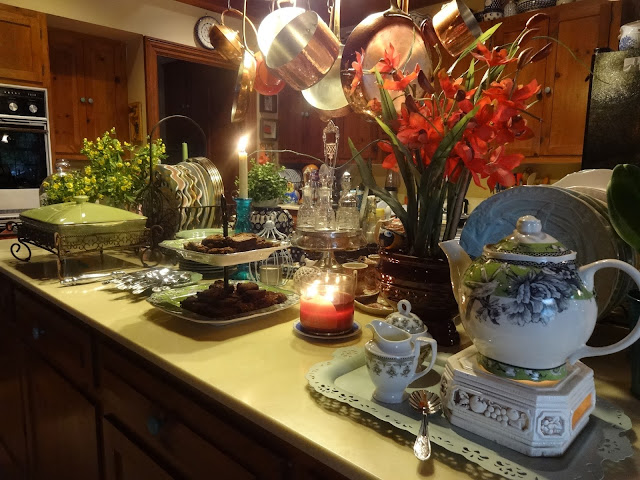 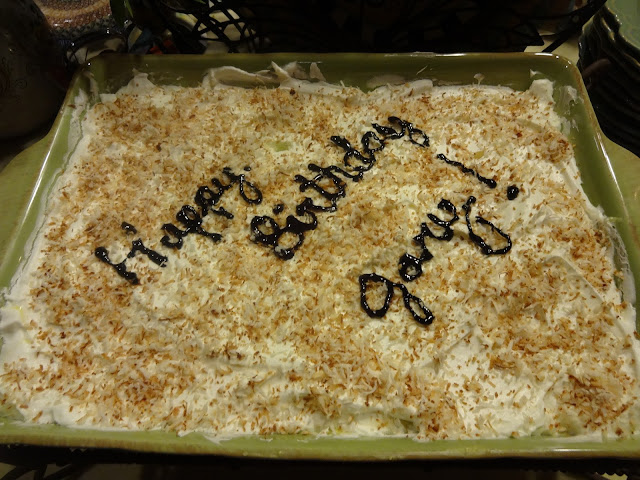 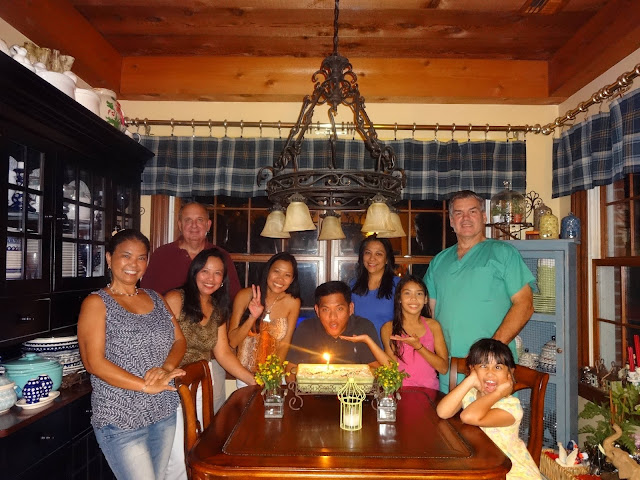 Thank you so much for stopping by.


You are all so appreciated and especially the hostesses for all their hard work organizing these parties. Thanks a bunch!

Everything looks BEAUTIFUL! What fun! And that pie! OMG!

Sumptuous set-up as always Christine! You make everything look and feel special! Love how the colors all tie up together, even the kids table is extra-special!

You have so many beautiful items to make special parties; no wonder you forgot these lovely salad plates and blue goblets.

here from MOM. What a gorgeous party setting!! I am in love with all of your dinnerware findings! Everything works so well together. Lovely thing for you to do, and beautiful photo of all of you.

Christine- I am always so impressed by how you open your home to your friends and how much fun everyone looks like they are having. That is a tribute to you and how special you must make them feel. Those children must have felt special with that adorable table you set for them! Both tables are beautifully appointed and the paisley plates are wonderful.
Love this post!

You are the queen of entertaining....what a terrific job you did on both tables and the buffet. Love it!

Looks and sounds like you had a great time with your guests, and the food looks wonderful. Thanks for sharing it with us.

Christine, you always have such beautiful tablesettings! Your collection of dinnerware and stemware is just amazing! You entertain beautifully!

Great party my friend! The food, the forgotten dishes, the teaset, those cute people napkin rings, the food and so on; all is amazing at your house. I'd love to go for my b'day party next month at your house, lol! Your friends are all so lucky with such an awesome hostess such as you! Thanks for letting me know about Kathy...this is the second time we're featured together! Thanks for visiting me.
FABBY

Oh, I have that flatware too and I use it a lot! Hugs,
FABBY

What a wonderful way to celebrate a surprise birthday! You have a beautiful set of salads with the yellow plates. The pretty name tags are so lovely. Your desserts look so delicious. Have a great week!

Hi Christine,
I loved your birthday table and the display of so many beautiful items!
A gorgeous home and a great party! Thanks for sharing.
Hugs from Portugal

Oh my Christine, I want to come to your house for dinner! Both of your tables are so pretty. I love the paisley plates on the adult table and the darling napkin rings on the kids table. The coconut desert sounds sinfully delicious.

What lovely tablesettings, delicious food and cozy ambiance, and all impromptu, which makes it so much more special, kind of like a surprise in itself! Lovely colours and energy here. Hope all had a fun time!

What an incredible hostess you are, Christine! Love the paisley plates. Everything looks wonderful and oh, would I enjoy your dessert table! Thank you for sharing and coming to tea.

What a beautiful table setting! Everything on the table is so lovely! Your friend is a very lucky person! Those little doll napkin rings are so cute, love them! Have a great week!
Nancy

It looks like a BIG birthday party to me, with your beautiful tables and details. Darling napkin rings! :) ~Zuni

It looks like a BIG birthday party to me, with your beautiful tables and details. Darling napkin rings! :) ~Zuni

Oh my goodness! What beautifully set tables. I loved the paisley dishes. And your buffet looked amazing. Thank you so much for stopping by.

You always put on such a lovely food affair. I love your presentations and you are obviously a fantastic gourmet cook. The table is lovely and I know they all loved it!

I want one of those cake/pie servers. It's so classy. So nice to find another Filipina on the internet.

Very beautiful...those turquoise plates are wonderful. Your attention to detail is amazing.

What a fun party! Both tables looked beautiful! I love the paisley dishes and the cute napkin rings for the kids.

Of course I am partial to the Paisley plates - love those. I have never seen a more beautiful "Kids" table though!! You parties always look so gorgeous!! Lucky guests.

The turquoise touches add such a touch of magic to your tablescape. This is another 'spur of the moment' masterpiece at which you excel. Gorgeous! Thanks for inviting us for a peak. Cherry Kay

Those plates make a wonderful collage! Thanks for sharing on Mandarin Orange Monday:)

No matter who you entertain, you always put such effort into making time with you special. This is no exception. So, your Florida home is in Cape Coral? I'm from Ft. Myers and just returned from visiting my brother there.

Christine, what a lovely table. And such a special way to honor a friend. I did a friendship post as well. There's nothing as special as a good friend.

Wow, for impromptu hosting, you are incredible! So glad you pulled out your pretty things to create these gorgeous tables! I love the paisley plates, and the rust napkins really showcase them nicely. The food sounds fabulous!

This looks like such a great party. Sometimes impromptu is the way to go! I love all of your 222 Fifth. You have some wonderful pieces, so do I!

This looks like a fun party for your friend. Everything is so pretty. Love the sunny yellow tablescape and the cute kid's table. The napkin rings are darling. Thanks for sharing a fun time with your friends.

Christine, your tables are always so beautiful and and you are the best cook. What a fabulous party and so pretty. Thanks tons for linking to Inspire Me. Hugs, Marty

I can't believe you "forgot" you had those lovely salad plates, Christine! What else have you forgotten to show us?
I have said it several times before, I would love to be one of your guests...your food always looks awesome! Thanks for sharing the recipe.
Have a great week...

Hello Christine, you always do such a marvelous job with tablescaping - love the jeweled colors and such a happy gathering to celebrate the birthday! I do appreciate you sharing with A Return to Loveliness,
Kathy