I hope you all had a fun long weekend and enjoyed a safe Labor Day holiday. We celebrated with a swimming party at home.
We had pot luck so everybody brought food which was good cause I was just recovering from a bad case of poison ivy.
Since it was Labor Day weekend, I decided to set the table patriotically. 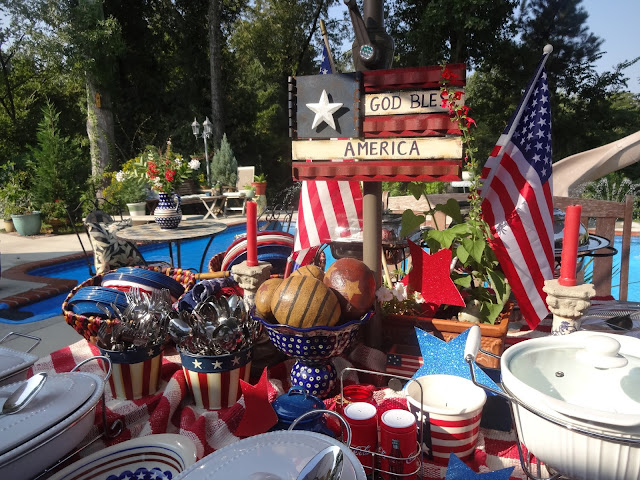 I made 3 desserts, a pineapple upside down cake, banana cranberry nut bread and marshmallow cheesecake the day before. 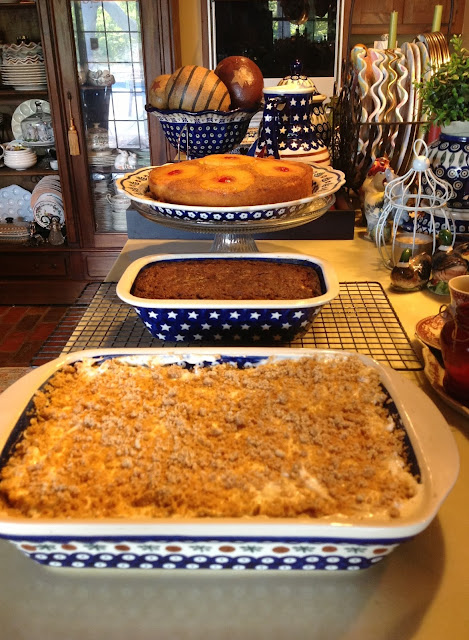 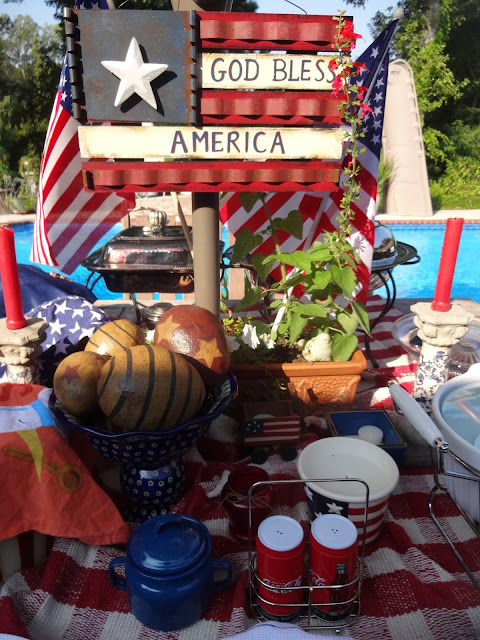 I mixed 3 colors of plates, red ruffled ceramics, which came from Penney's after we moved here and which are also one of my everyday dishes, blue and blue and white enamel and white ceramic ones from Pflatzgraff.
I have red white and blue melamine plates but they are stored in the attic and I ran out of time to go up there so I just used what I had down here and mixed them up with my Polish pottery servers. 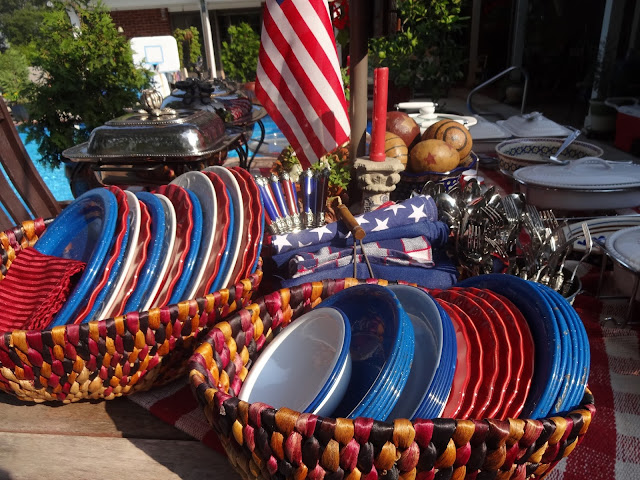 The flatware sets are blue and red San Remo from Horchow and I placed them in small red, white and blue star studded tin buckets. 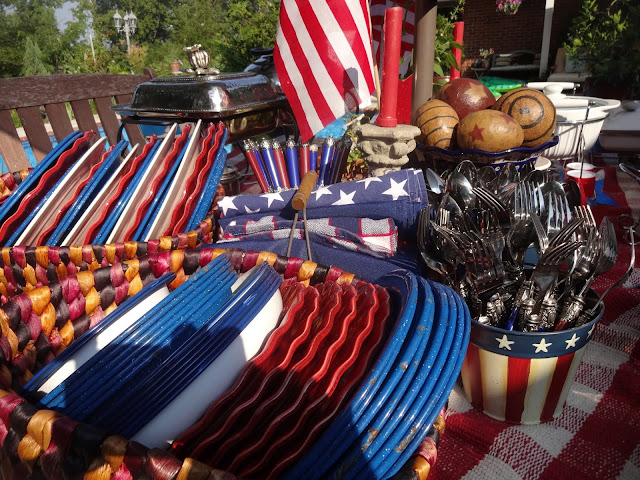 I bought these egg shaped and round orbs from Lynn's store. Placed in a Polish pottery pedestaled bowl, they became part of my centerpiece.
Coca cola S&P shakers were bought from an antique shop downtown. The little blue enamel jar contains vinegar with  hot peppers for dipping. 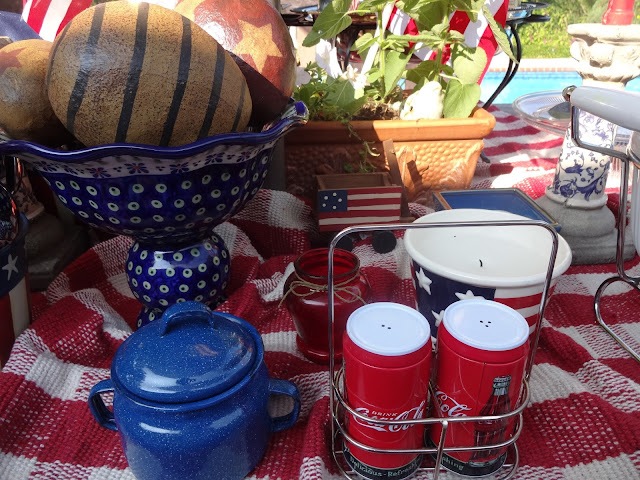 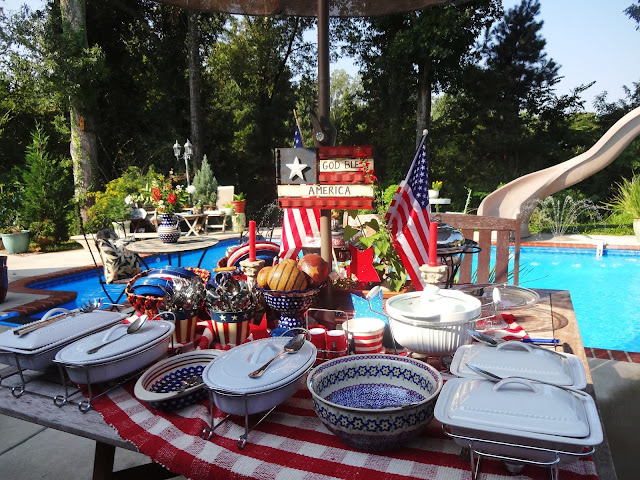 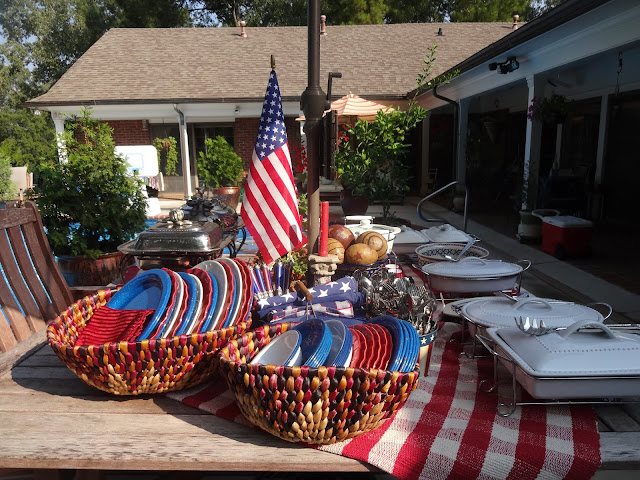 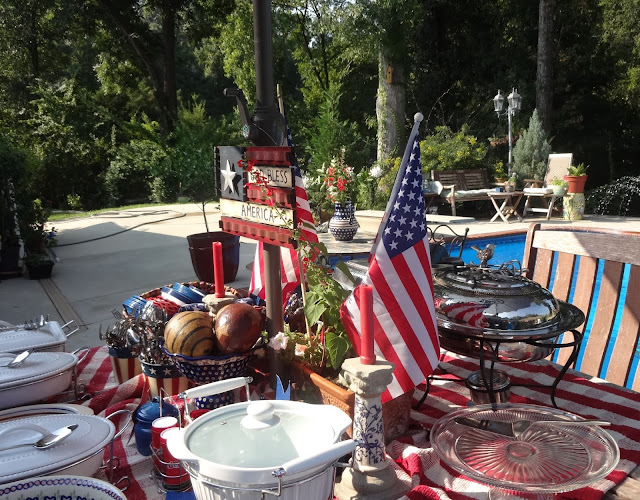 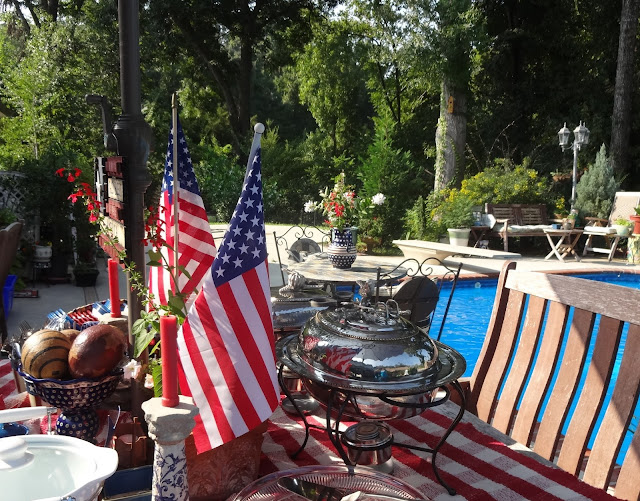 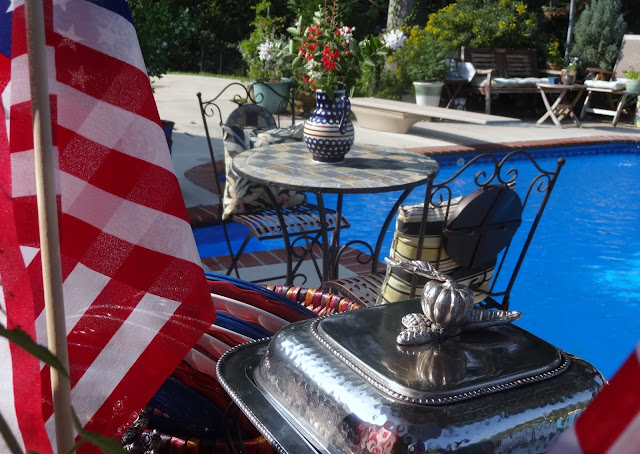 I set the stemware and coffee and tea servers on the table in the covered porch area. When I was hanging that "Mermaid Café" sign, wasps started coming out of the lantern and I got stung. I have been looking for the wasp nest and I finally discovered it the hard way. 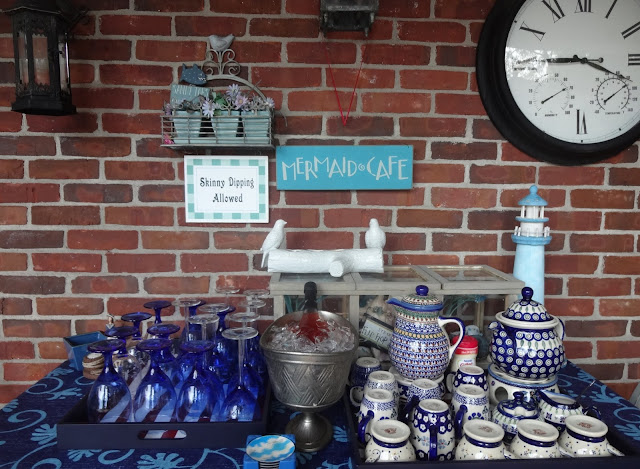 Here is the happy bunch. 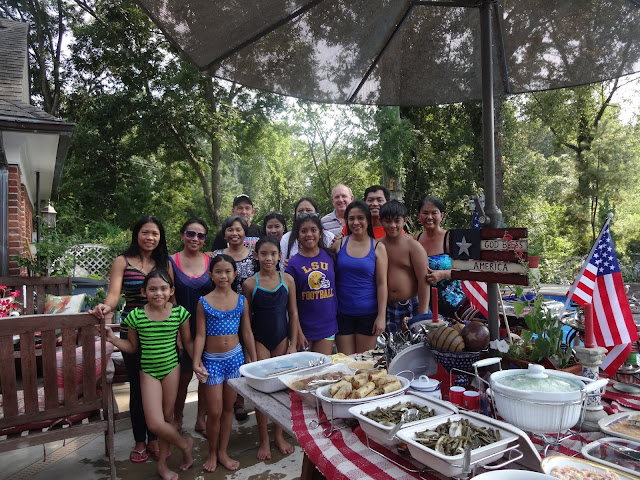 We had so much food! 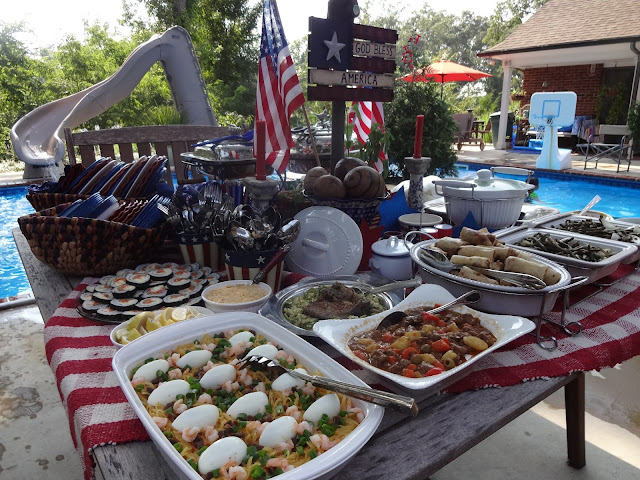 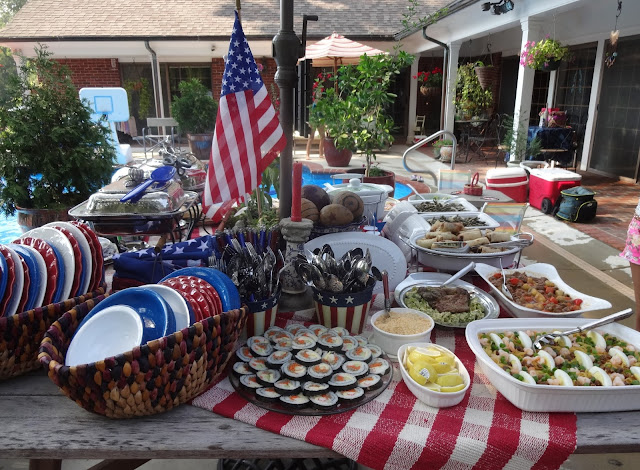 I grilled some ribs and they turned out really good. My friend, Noemie brought pancit. 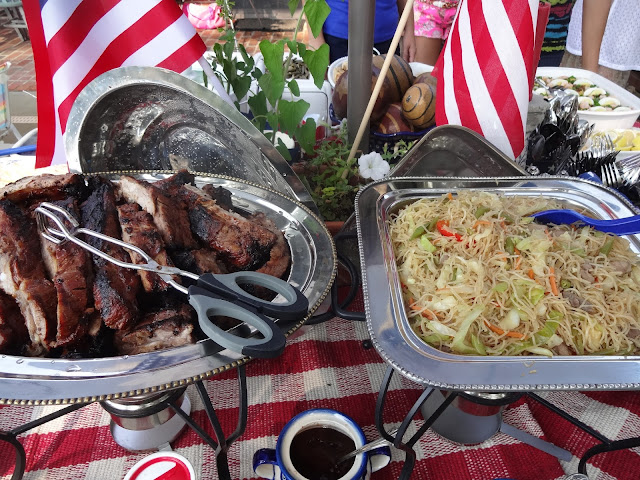 Don't you think we had enough desserts? LOL! 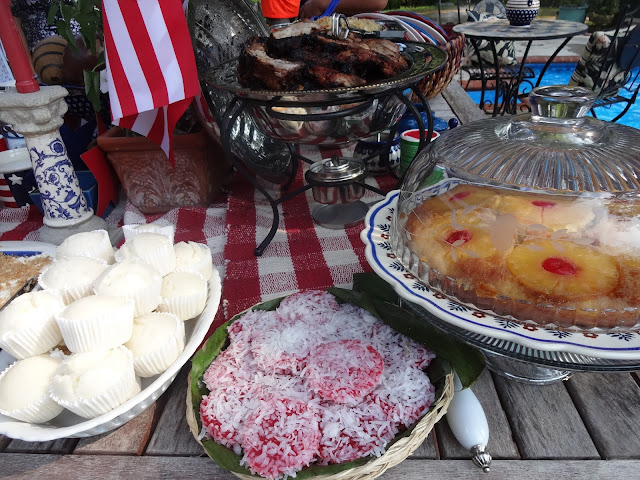 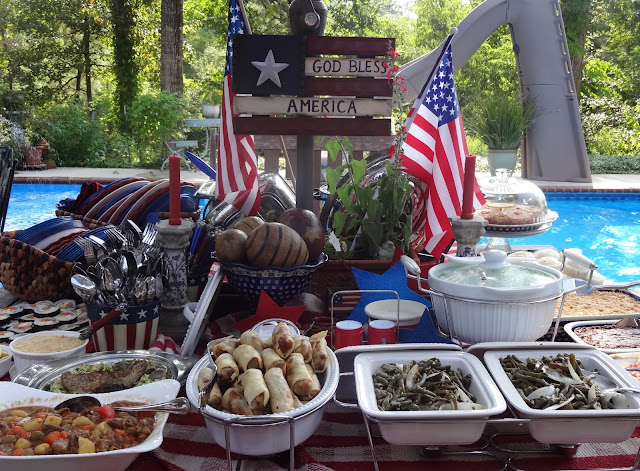 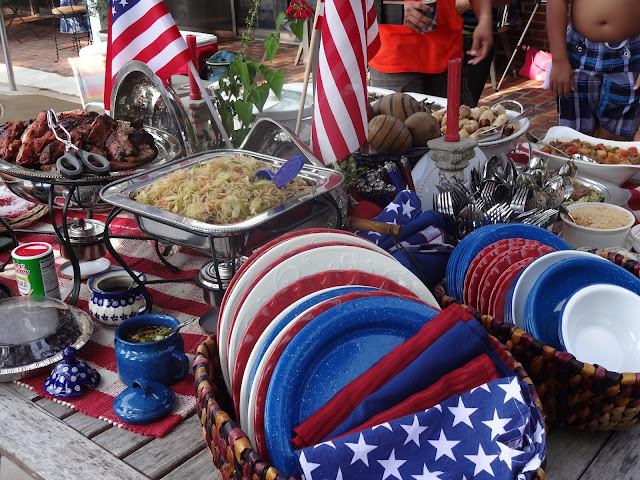 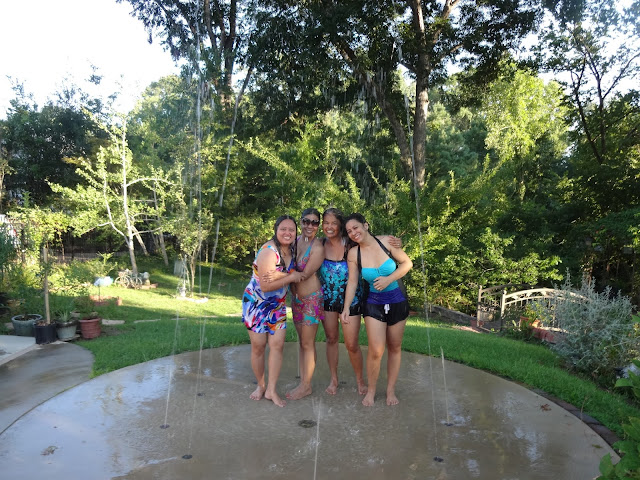 It was really a fun weekend and a nice way to say good bye to summer. Thank you for stopping by. I always appreciate you coming over and especially leaving a comment. Thanks most especially to our gracious hostesses.

Sarap naman. I really am drooling with all the pancit and those Filipino delicacies.

Fun day with fun people around make the day go round.

Happy to see you again and hope I hang with you. Summer in Europe is absolutely one of the best of all summers since moved from The PI. Kaya, alang nagawa sa blogging. Travels and friend bondings was the iterinary of D´Nics.

Happy Tuesday and a blessed week ahead. See you around.

Cute table as always. The food looks delicious! All of those wonderful looking desserts! Hope you get over the poison ivy-I get it too!

Hello Christine,
You all look like you have had a wonderful time! Your table setting is incredible, everything looks perfect. The food too, OMGosh! I don't know how you do it all. But I am sure your family is really thankful for all you do, and do so very well.
Hugs,
Terri

Sounds and looks like you had an enjoyable time. The food looks yummy!
Enjoy your week.

Fantastic set-up and party Christine!!!! Sana kapit-bahay tayo! waaaah! Love everything especially how you set up the desssert section!

Ooo, I'd like a piece of that pineapple upside-down cake!

Thanks for joining in the celebration of Blue Monday’s 5th Blogiversary!

OMG! I'd love to be eating all that food at your beautiful house and wonderful patriotic setting my friend! Your guests are some lucky ones!!! Three desserts, wow! I personally would like some ribs, please! Big hugs,
FABBY

Christine, you were clever to plan a pool party so that all the food could be worn off from swimming. Everything looks delicious, it's a wonder anyone had room for dessert.
Happy September,
Judith

What a fabulous party for the long weekend, Christine! Everything looks just wonderful. Love the red, white, and blue theme. Oh, yes, the desserts look delicious. Sorry you got stung by the wasps. That's no fun. And I hope you have recovered from the poison ivy too. Thank you for sharing all this fun with us at Tea Time.

I would have loved to be in line for this food - looks wonderful. So many delicious dishes and that pineapple upside down cake - whooooooa! So glad you shared your family celebration at Tea In The Garden!

Christine, you certainly did have a beautiful spread of food. Big appetites after all that fun in the pool and splash pad. Glad you are feeling better.

Oh my! How beautiful everything is! I love all the dishes and the food looks soooo good! Wish I had some right now! Hugs and blessings, Cindy

What a great party. Your collection of red, white, and blue dinnerware and flatware is impressive. The red ruffled plates are my favorite. That incredible pineapple upside down cake makes me want to start baking one myself right now (or better yet, eating one). Yum!

Wow Christine, you sure know how to throw a party. Everything is so coordinated and lovely. The food is amazing. How fun. It looks like everyone really enjoyed themselves.
Thanks for stopping by. xo Linda

This looks like it was
a fun and enjoyable
party. Thank you for
sharing all of your
photos. It is almost
like we were there.

Christine: I love your family! You are always together as families should be. Your table looks wonderful and the food looks so good. Have a wonderful week. Blessings, Martha

Christine - no wonder that everyone wants to party at your house!! You really know how to do things right. Marshmallow cheese cake - are you serious - wow, wow! That sounds fabulous. Love the red, white and blue! It certainly looks like everyone had fun...

I always love to see the fun times and great food at your family parties, Christine. It looks like everyone had a wonderful time.

What a cute table for Labor Day. What a feast! You all look like you had a wonderful time.

Love the red, white and blue everywhere and I'm sure all those smiling faces had a great time.

Christine, your pool parties must be the envy of the neighborhood. They aren't just parties, they are feasts! I can never get over the number of dishes you make. Wish I had been there. The table is stunning as always with as much thought to the presentation as to the food! What a wonderful event!

Wow you really did a fantastic job! You're creating such good memories for your family. Love all the details you included on the table. All the different dishes of food desserts look fabulous! Love the family portrait. Looks like you all had a great time!

Beautiful! Love your table, plus the food looks wonderful.

Beautiful! Love your table, plus the food looks wonderful.

wow, love the patriotic colors and they way you had dishes in the baskets....such a great table with food that look tremendous...

This is SOME SHINDIG!!! I love love love the stacked red, white and blue plates......and those colored orbs that matched the motif.....well, I love everything....and I even spotted in 2 of the photos one of my all time favorite desserts--pineapple upside down cake!!!!

Wow! What a feast!! It all looks so fantastic! Your table looks beautiful and your guests - more than happy to celebrate!

Wow Christine. What a great party!! Everything looks so delicious and the table ware is so appropriate for the Labor Day holiday.

Christine, you host the greatest parties. So much food
It would feed a small army and I love the wet fountain deck. That looks like so much fun.
xoGinger

You had me with the pineapple upside down cake, one of my absolute favorites! You've created a perfect setting for it.

It all looks so yummy and beautifully displayed, too! Looks like another fun party. Sorry about your poison ivy:(
Hugs,
Patti

Christine, what a lucky group of friends. Your poolside setup looks like out of a magazine. Love how it all looks! Best of all the friends' smiles. What wonderful memories you have created for so many guests.

Thanks for sharing,
Helen

Oh wow, I wish I could cook like you. This is stunning. Thanks so much for joining Inspire Me. Hugs, Marty

Christine, both tables look so pretty. I love the way you stacked the plates in alternating colors in the baskets. I'm so sorry about your poison ivy and bee stings. Hopefully, that's all over now. laurie

Neat patriotic table...and all that food looks delectable!
Have a great week, Christine...

You do know how to throw a spectacular party! How much fun you must have had - the decor and the food look amazing! Such fun!
I do appreciate you sharing with Home and Garden Thursday,
Kathy

Wow, you have a great place and those food made me drool. :)