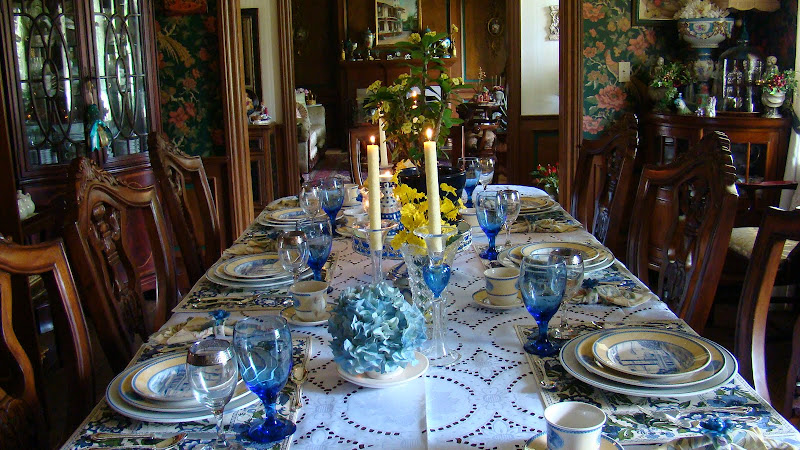 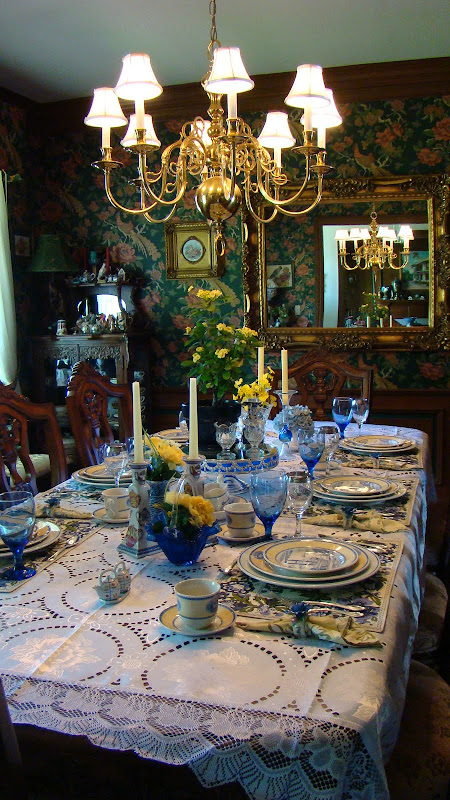 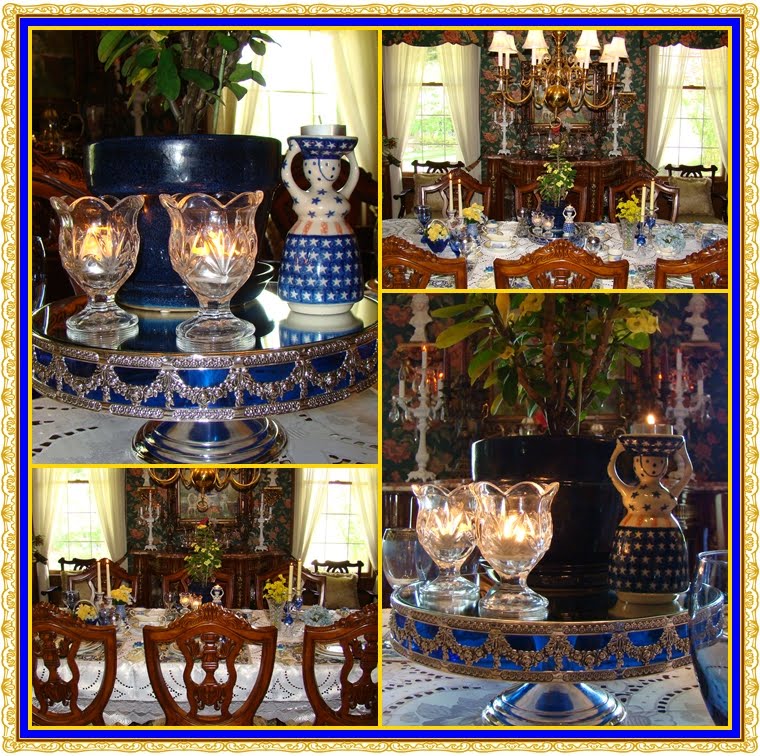 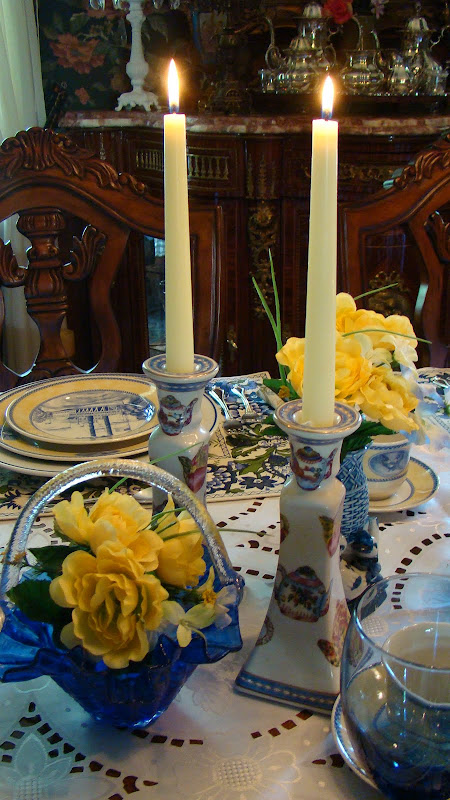 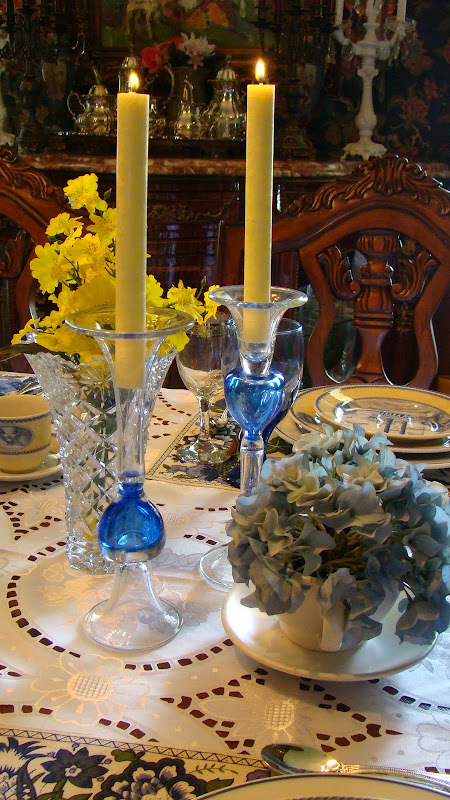 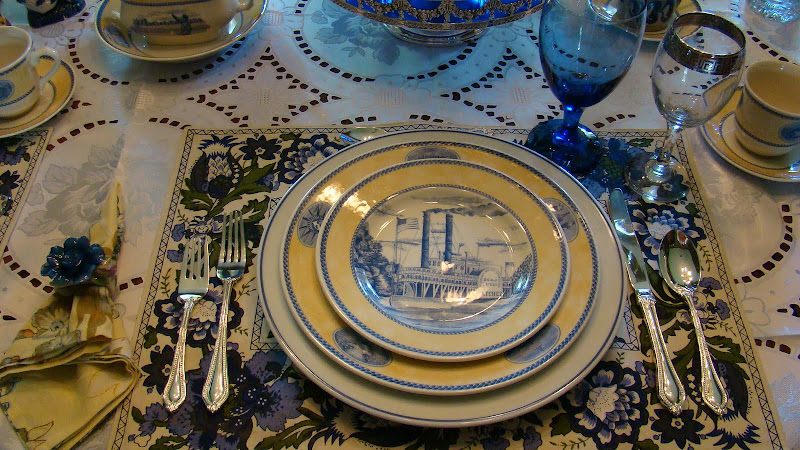 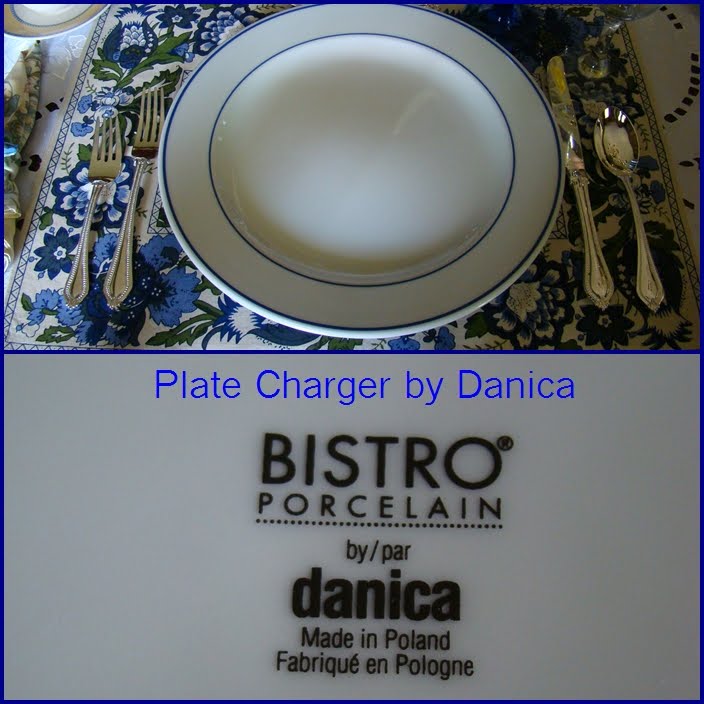 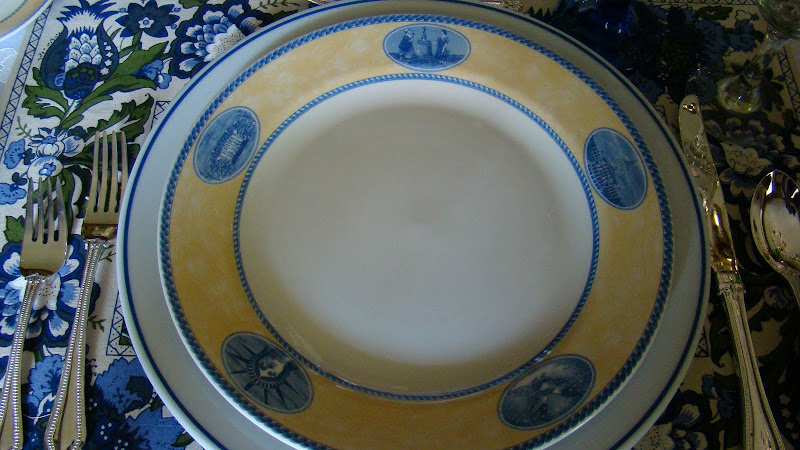 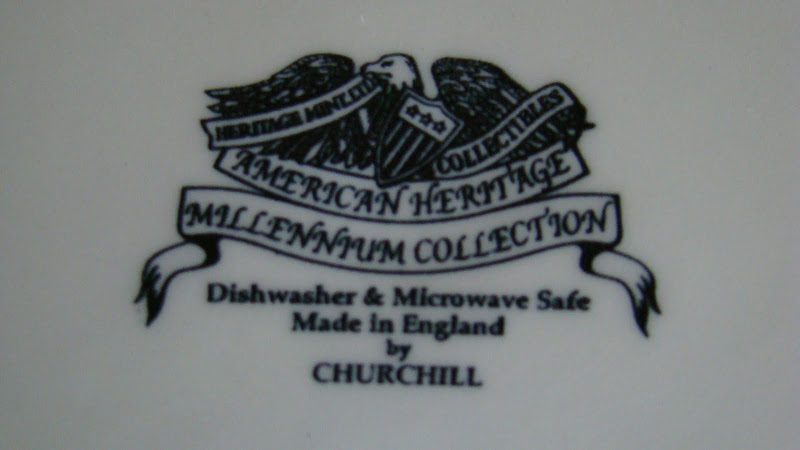 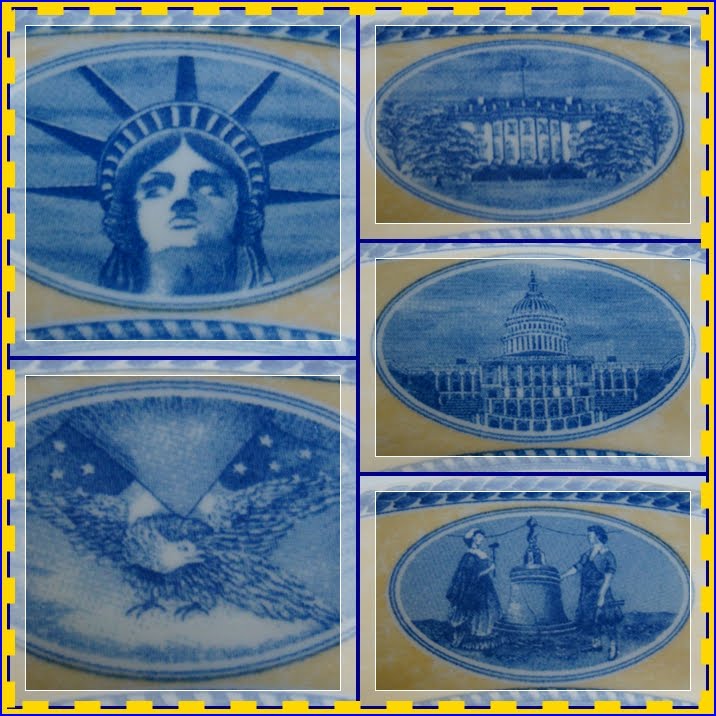 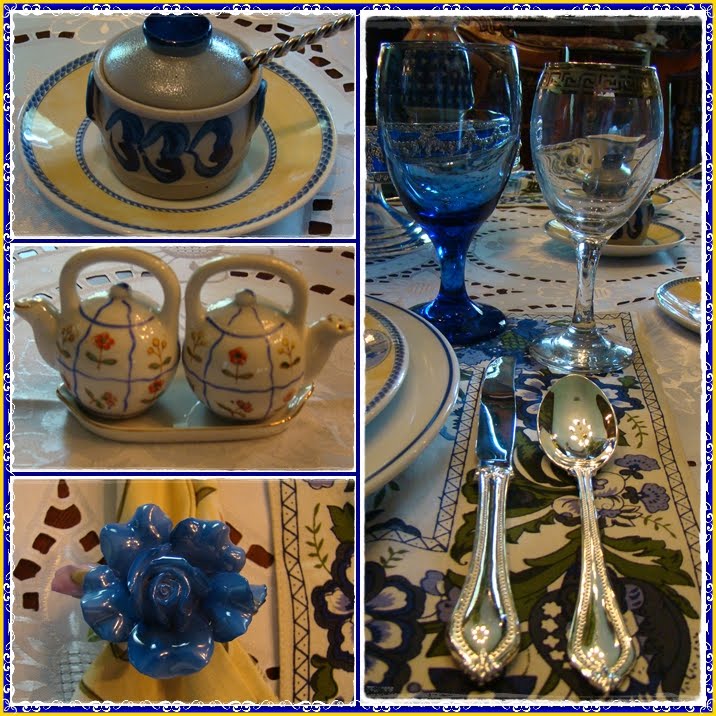 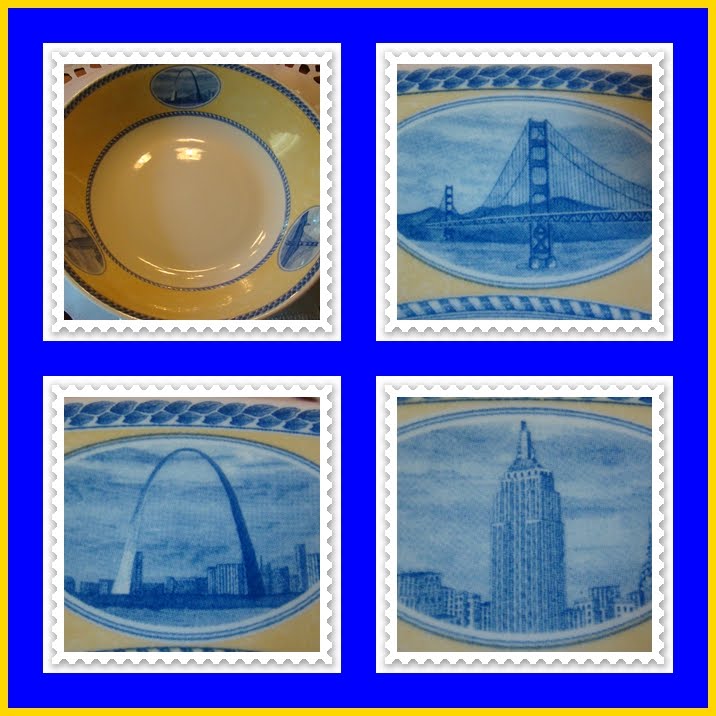 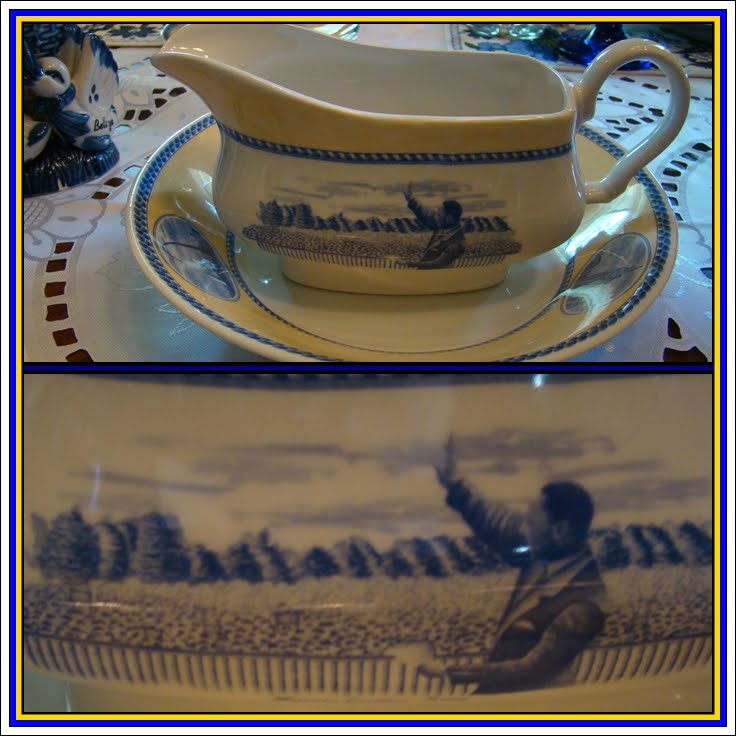 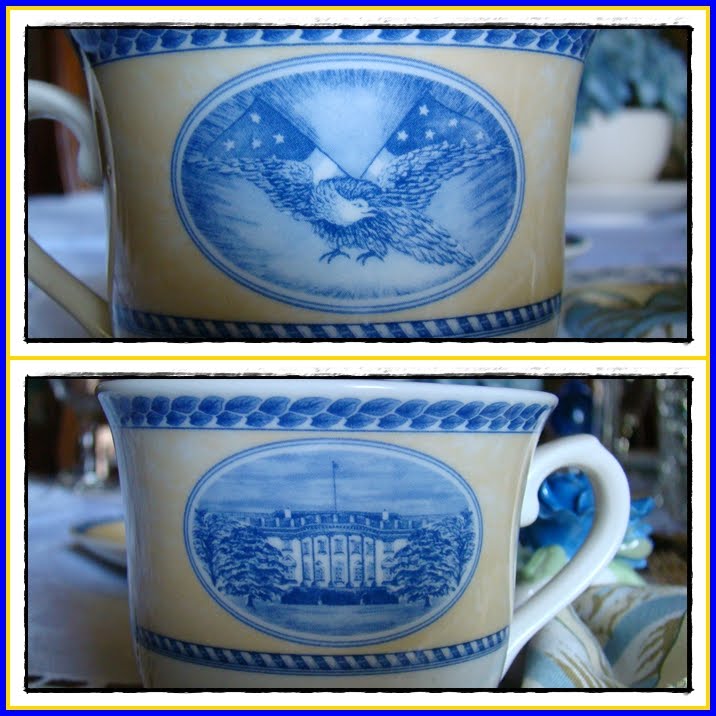 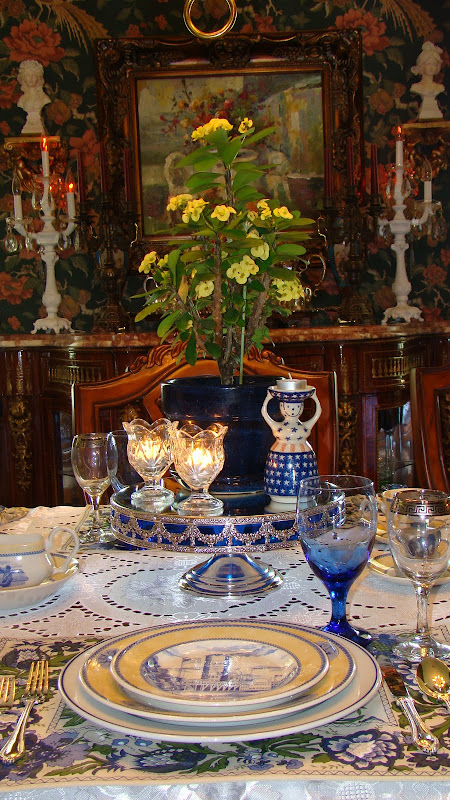 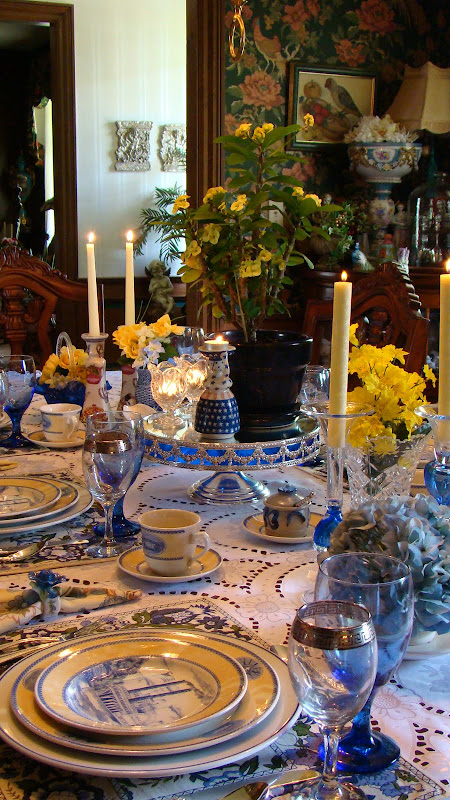 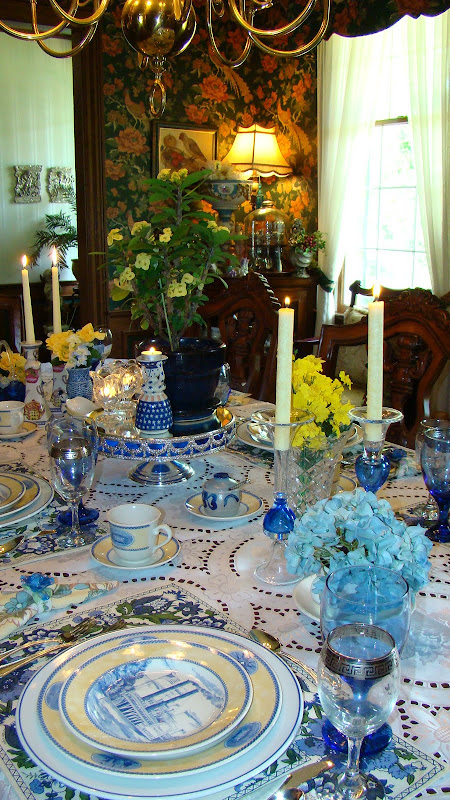 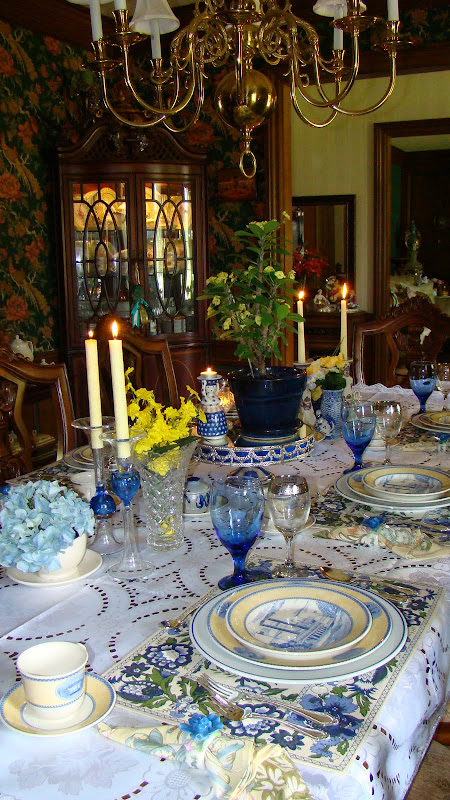 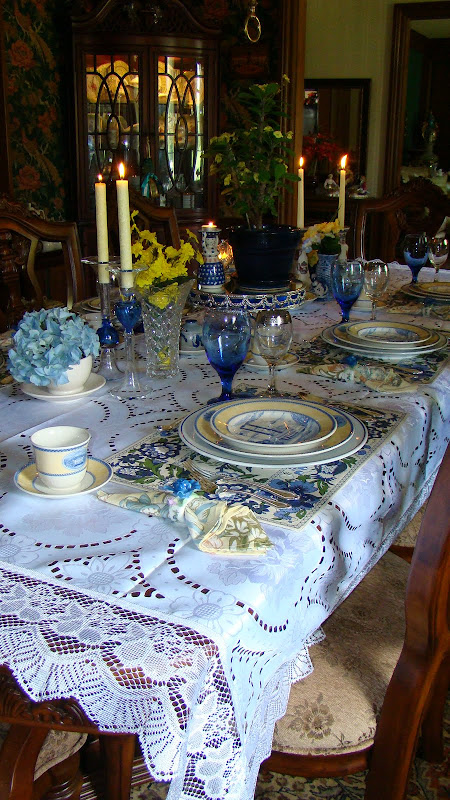 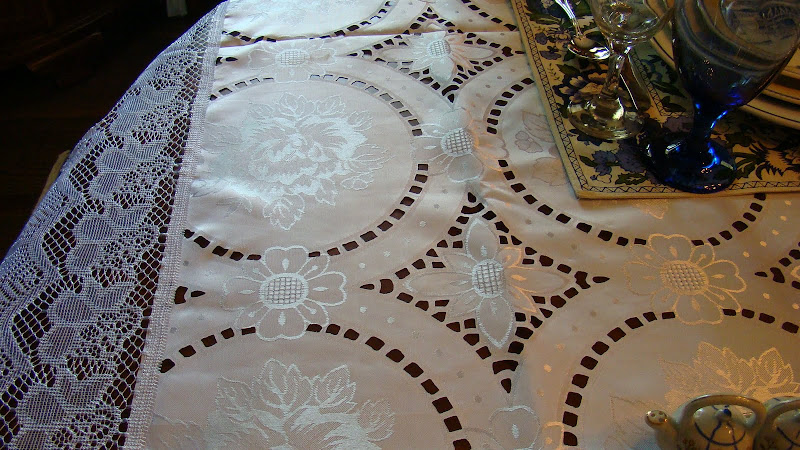 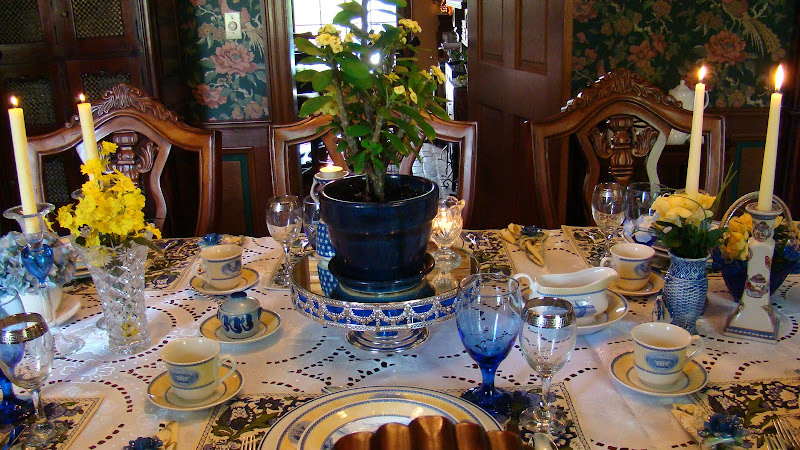 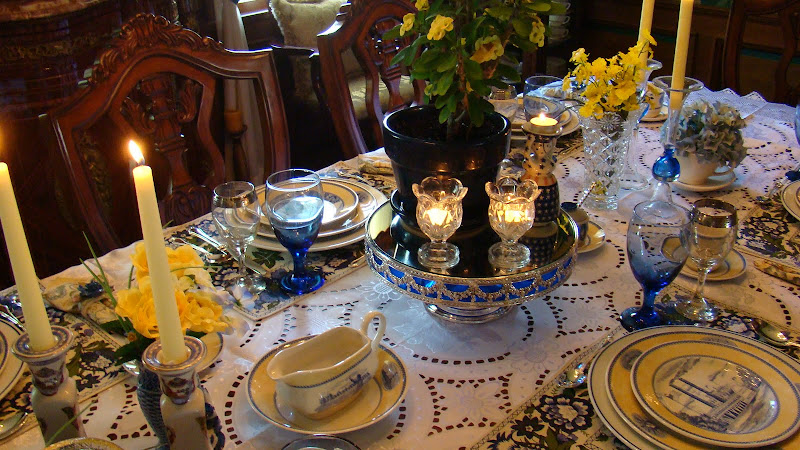 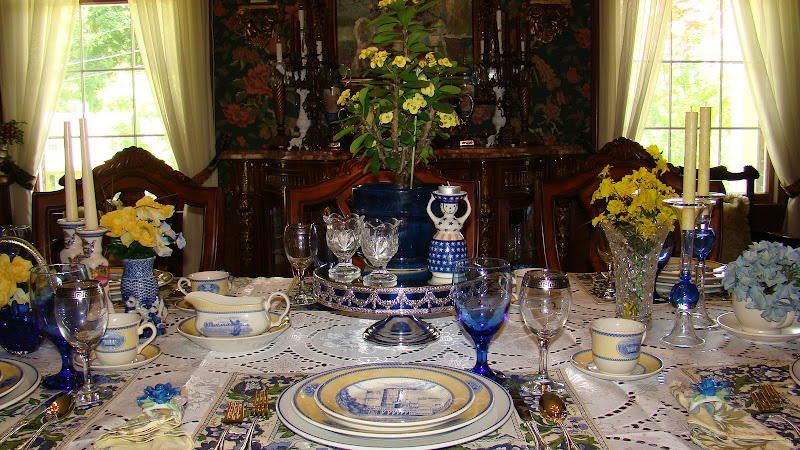 Hi Christine, I just love the blue, yellow and white of this table setting. Your dish pattern is pretty and unique. I have never seen those. I love your tablecloth. It is just all so pretty as usual.

Beautiful! Blue and white with a little yellow mixed in - so pretty! You really did good. What time is dinner? :D

Just gorgeous table Christine! Every picture I kept saying out loud, "Oh, I love that....ooooh, the is so pretty!"

Well, it is all so very beautiful! I always love cobalt anything so I truly like this tablescape. My favorites are the gorgeous cake plate and the steamship plate - love all the American history on the dishes!

Christine, what a perfectly, patriotic post:):) How was that??? I love the table and the dishes are wonderful! The little S and P are so cute too! Can't wait to see all the tables you ahve planned! XO, Pinky

Love the combination of blues and yellow and the plates are such a wonderful keepsake of American memorbilia. So glad that D asked about these dishes so we could see them. Happy Thursday,Kathysue

Hi, Christine,
I'm just now looking at all the tablescapes, but when I got your email, I went ahead to find yours.
And I love it...........I knew Iloved those dishes :) You did a beautiful job with everything. Great closeup pictures, too. Thanks for using them this week.
D

i am always smitten with by&w!

Christine, This is a beautiful table! I love the china and the cobalt blue cake stand. The Royal Albert napkin rings are very pretty too. Overall, just a GREAT looking table!
Beth

Be still me heart! This set is so Patriotic! How do you find these things! The color combination is always so fresh and clean. Once again you have set a remarkable tablescape, fitting for an American President. Keep your flag-a-wavin' Joan

Hi Christine! Oh, my goodness! Your table is amazingly gorgeous! Your yellow and blue dishes are so unique. That cake stand is so pretty! Oh, you just know how to do it!
Oh, I saw those grand boys of yours! I can't believe how much the baby has grown! They do that, don't they? Little B is so adorable! I wish I could enjoy mine like this!
I saw Jane's post about being at your house! Oh, what a wonderful time y'all must have had.
Be a sweetie,
Shelia;)

Another stunning table, Christine! Blue and yellow are wonderful together, and your amazing dishes are highlighted so beautifully with your flowers in those colors. Love those Princess House candleholders!

Chjristine, how breath taking looks that. The china is to die for and so ist the cake stand. And all the details match perfect. And what a gorgeous room. Whow, I would love to be invited.
Greetings, Johanna

Hello! I'm stopping by from Blondie's blog, where she tells of visiting with you.

What a lovely home you must have. And what a wonderful hostess you must be. I will be sure to pop in here again.

Christine,
Love it! Just beautiful! I always love to visit your blog...you have so many unique things and dishes to share...I am like D...Those dishes are so pretty...I hated to miss the get together...Hopeful you will do it again....I want to make a trip up there...And thank you for doing the great job and events for us Mississippi Southern Belles...I know you have plan for this day to be special...Thanks again for your hopitality! Smiles and Hugs Kathy

Those dishes are so unique. Your table is just lovely!

I have always loved blue and yellow together and these dishes are so unique. I see our neighboring St. Louis Arch on them. These blend so well with all of your pottery pieces that I'm surprised you don't use them often. I love the blue goblets and the napkin rings...great table setting.

Your tablescape is beautiful. I love how you mixed the candleholders.

Christine, I'm glad you shared these. They are so different and the blue and yellow combo is stunning. I'll look forward to your patriotic table yet to come. ~ Sarah

Christine, have you seen these dinner plates on my blog posts in the past? I don't have all of the pretty accessories (the salad plates, gravy boat, etc.), but I do have those dinner plates. You have set such a beautiful table with them. I absolutely LOVE that cake stand. It's gorgeous! laurie

Wow Christine, this table is incredible with all the cobalt blue and beautiful blue and yellow dishes. Just wonderful!

This table is so pretty Christine...and it really looks patriotic! Blue and yellow are so pretty together. Beautiful flowers too...are they from your garden?

I am so happy I didn't miss this. And it is a wonderful idea that you are doing a theme until July 4th...how fun!

Christine, I have never seen that pattern before and just love it! The colors and the designs. It's SO neat! Great job on your tablescape...

Stunning Christine! I remember it, but I'm so happy to see your tables and home again! The dishes are gorgeous and the centerpiece stand in blue is gorgeous! Every element you've used here is perfect, as you always do! I've had issues lately, so I'm just making my 4th's table tomorrow. I will tell you about it by mail.
Love,
FABBY

Oh! I am so glad you reposted this beautiful table. I had never seen it before and I really enjoy this table with all of the beautiful history depicted on the dishes. Thanks for sharing!

The blue and yellow is so lovely!! Such an elegant setting! This truly invites the guest to enjoy a very special meal. Wonderful table cloth as well... :-)

Got My Reservations said...

Those dishes are just fabulous and a nice respite from red, white, and blue. Beautiful mix of pieces!

What a wonderful set of dishes....and that is definitely set in the time when MLK gave his historic speech....truly a magnificent set!!

I wish I had the salad plates. I only have the dinner plates, and what a great charger you used under them. Your table is beautiful, and that cobalt cake stand in the center is stunning! Hope you and yours have a wonderful 4th of July weekend. I have all of you in my prayers. laurie

I hope all is well and that things are looking up there in Florida, Christine.

You'd better hang onto that plate with the Golden Gate Bridge depicted on it since the look of the bridge is about to change! I saw on the news the other night that they are trying to keep people from jumping and are going to install some kind of platform or net or something. Anyway, the look is going to change and anything with the original look will surely be worth some money some day!

What's not to love about this tablescape!!! The cloth is beyond gorgeous.....the set of dishes is so pretty and unique.....the stemware is perfect...the centerpiece.....oh, I could go on and on!!!! Elegant, yet so pretty and cheerful, thank you......happy 4th to you!!!

Did I mention the place mats??? Perfect compliment!!!

Love your table...so elegant, as usual! Those plates are divine.