April 22 is Earth Day! Let's be aware of our environment and help protect it. Celebrate Earth Day!
When I read that Kathleen is having an Earth Day theme for "Let's Dish", I really had no idea what to create. I started imagining of what is on earth...dirt, trees, birds, animals, people, pretty much what you can see everywhere, I think. I decided to make the tablescape predominantly brown and green because that's what I see when I look on the ground. 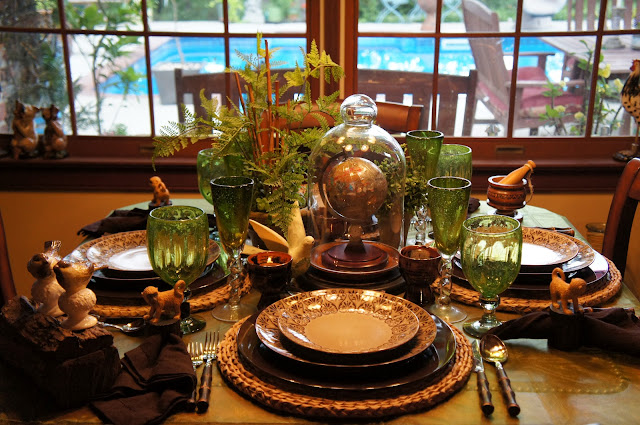 I wanted this tablescape to be kinda woodsy since the earth has lots of trees and wood so when I passed by this driftwood case in the family room, which is actually holding a wooden domino set, I moved it on the table and placed my bird s & p shakers on it. I like how it turned out. 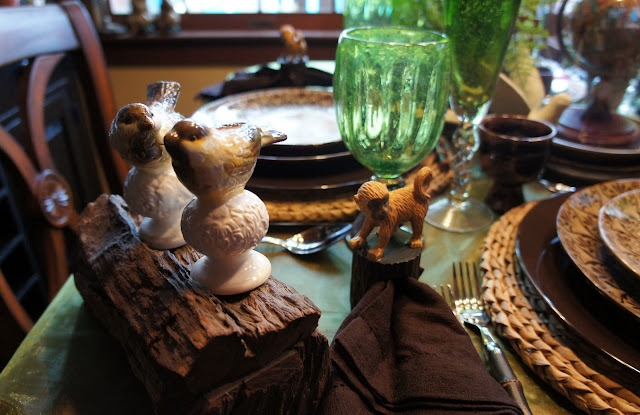 This monkey napkin ring holder is such a cutie! I got the set from Z Gallerie at 75% off sometime last year. Love that innocent expression on his face. 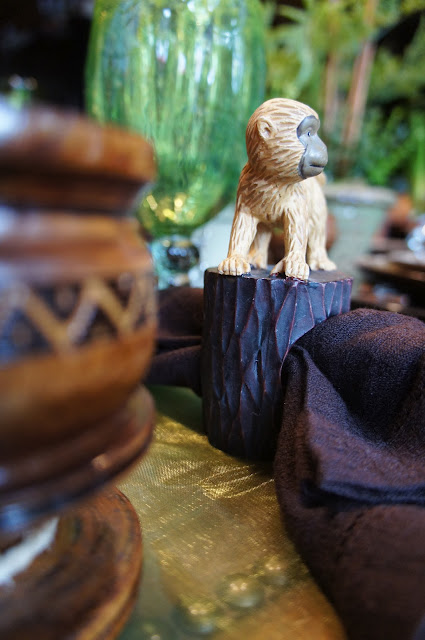 The plates are made by American Atelier in "Mehndi Brown" pattern. Dark bamboo flatware from Ross. The stems are Mexican hand blown from TJ Maxx or Marshall's, brown hem stitched napkins (forgot from where) and the plain brown plate chargers are from Horchow. 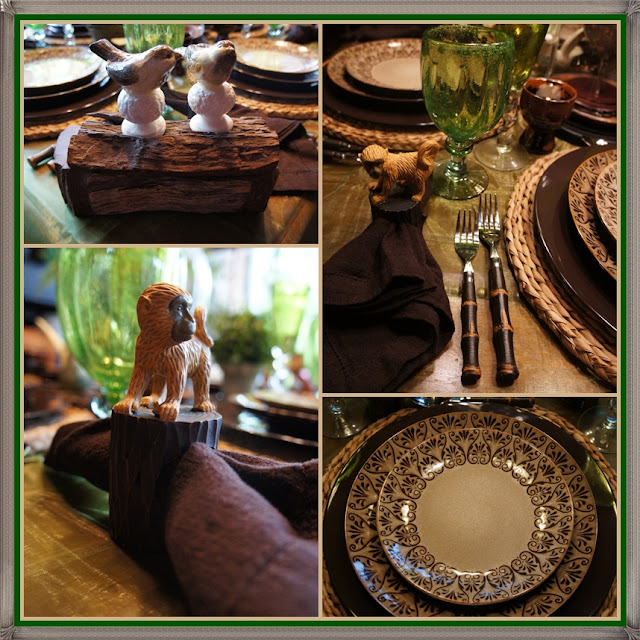 I had this globe made out of natural semi precious stones, which BTW mostly come from caves and rocks, hiding in the cabinet. I thought it would be cute inside a cloche. 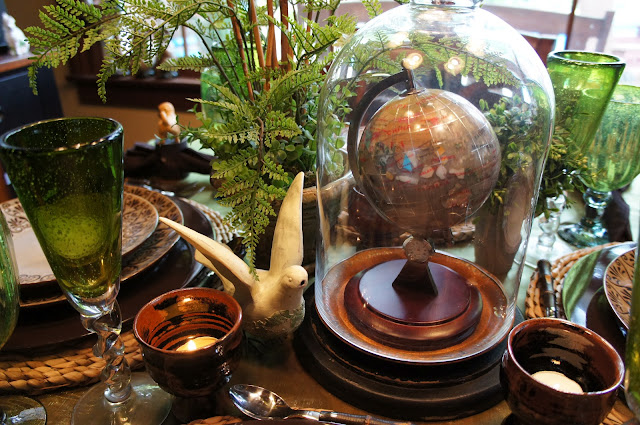 I have 3 little pottery cups which I repurposed into tea light holders. I added my bird with spread wings. Looks like he is celebrating with me. It has leaves etched under him. 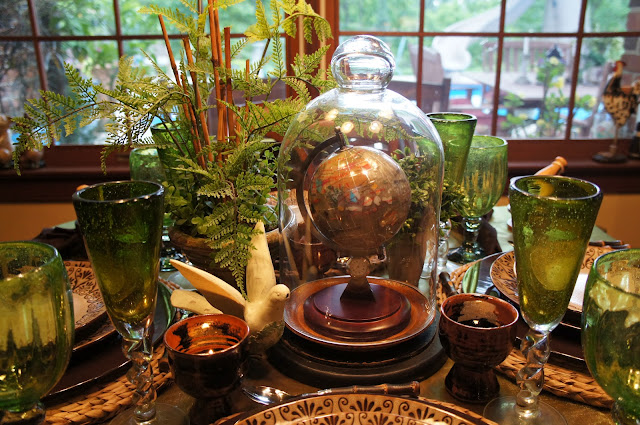 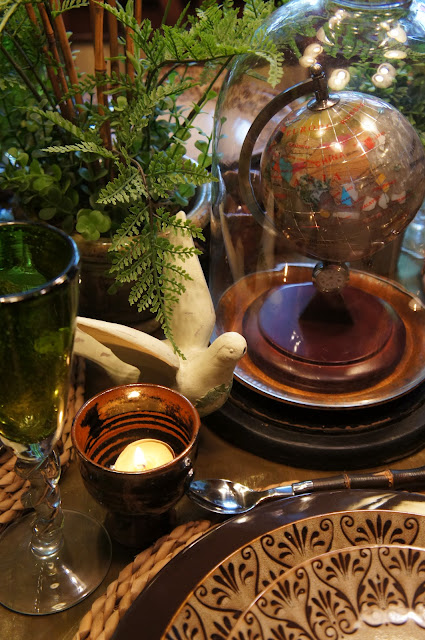 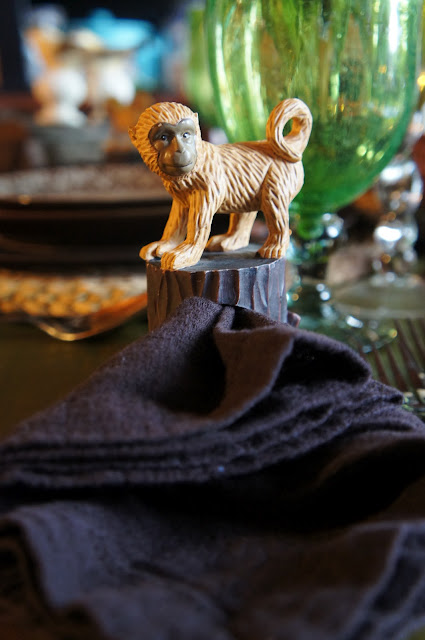 I like how the beamed kitchen ceiling is reflected in this picture. 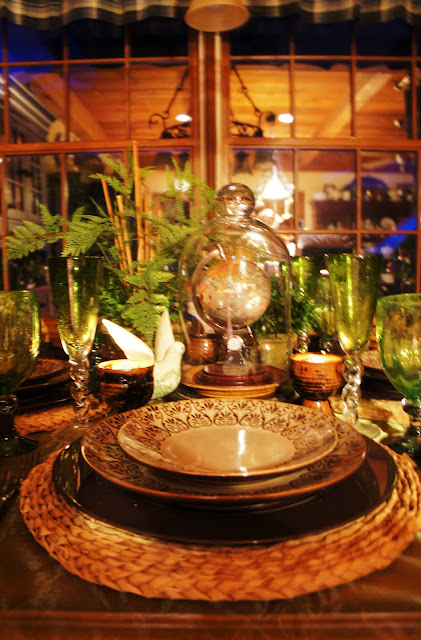 At first, I used brown and white polka dotted placemats but replaced them with these natural fiber ones which I obviously preferred. 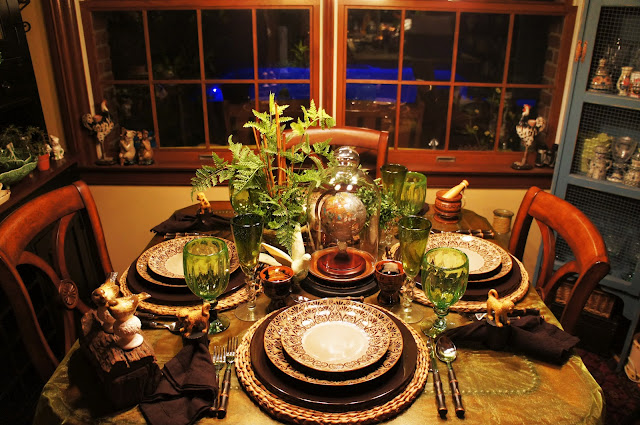 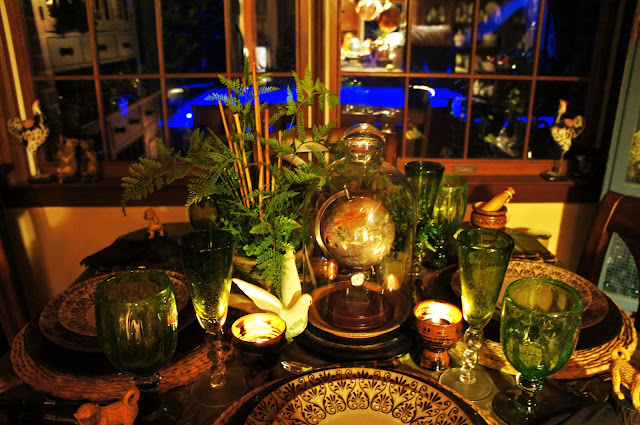 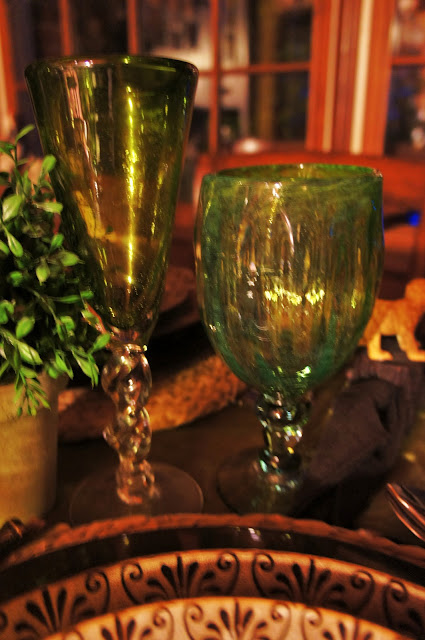 A night view of the pool in the background. 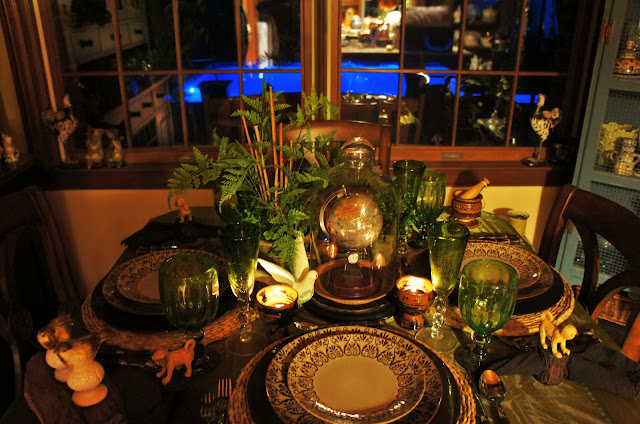 The table topper is a very sheer green voile material. from tableclothsfactory.com. If you want to buy very reasonable table linens, go there. 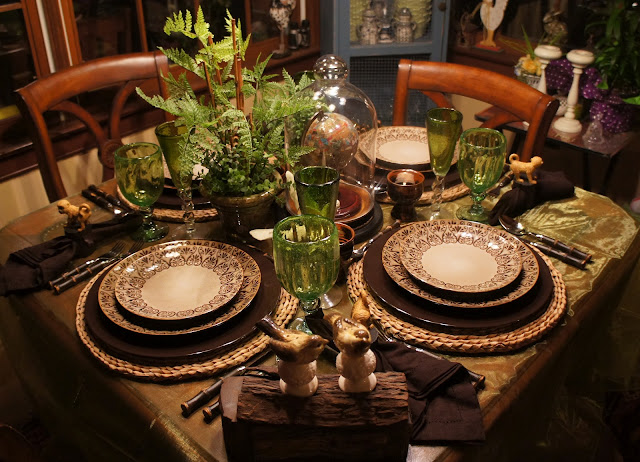 I have a small pussy willow tree that I wanted to use as part of the centerpiece but it outgrew the pot it was in so I transplanted it into a bigger pot last week and I think it will be too big for this table now, so I scratched off that idea.
Instead, I used a faux fern instead. I see them growing wild in the forest especially by natural streams. 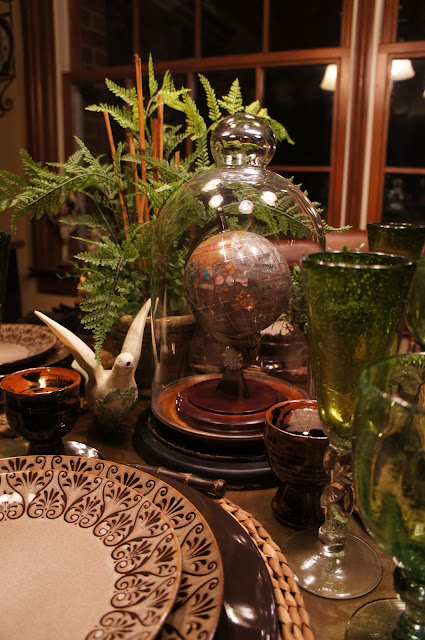 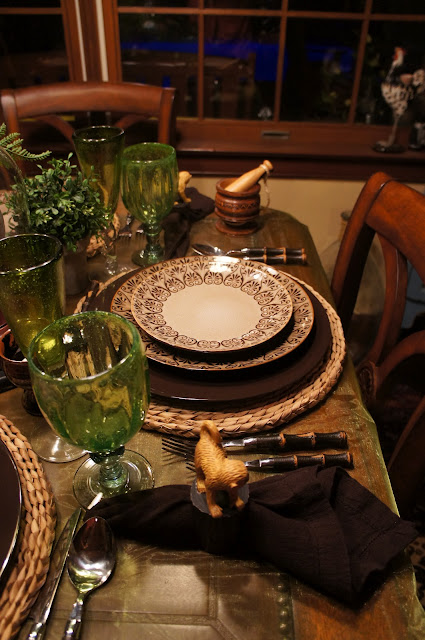 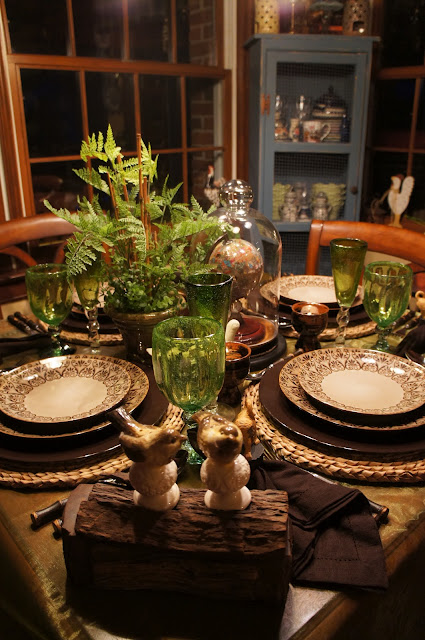 I didn't think I would be able to create another table before I left for FL but I found the time in between packing.

I am not just celebrating Earth Day on Aprill 22. I am also celebrating the birth of my youngest daughter Tina, who have given me 3 beautiful grandchildren..
Happy Birthday, baby girl. I love you very much!
I would like to link with Kathleen's Let's Dish at
http://www.cuisinekathleen.com/

Thanks for hosting and thanks to all who visit.

Happy Birthday to your dear Tina..may she have a blessed day April 22th. My youngest bro's b'day is also April 22, he'll be 50! Your earth table is adorable with the pretty globe made of stones, fab! The dishes are terrific too, all the earth related details are perfect! Have fun and enjoy "squishing" all your FOUR lil'ones!
FABBY

I think I´d like to be invited to dinner. :)

HI Christine! Happy birthday to your beautiful daughter! Your table is so pretty. You just thought of everything. Love your choice of dishes and all your little creatures.
Be a sweetie,
shelia ;)

You did a fabulous interpretation of a Good Earth table, Christine!!! It looks great! The colors are all so earthy and rich, and you just cannot beat the plants you chose. The little monkey napkin holders are cute! I didn't see them at the Z last year. I love the expression on their little faces! Those plates...the design on them is just exquisite! Perfect!!!

Hi Christine,
you have overdone yourself with that beautiful tablescape. I love how you combined all the wooden and earthy elements. Really beautiful.
Happy Birthday to your daughter. You all look really happy.
Best greetings, Johanna

I felt like I was a guest at a luxurious dinner on a Safari. Wonderful color and texture. The little monkey won my heart. Thanks for inviting us for a peak. Cherry Kay

Christine, your Earth Day table is a delight. Clever idea to use the globe. Happy Birthday to Tina. Have a great trip.

Your Earth Day table is one of the prettiest ones. You have so many wonderful items to use on your tables.
xo bj

Happiest Birthday to your Tina....:))

Love your earth day tablescape. Cool how you used the globe! A must pin!
Happy birthday to your Tina. Hugs and blessings, Cindy

I knew you would set a wonderful Earth Day table. It is fabulous, Christine.

As always I enjoyed seeing your family.

Lovely! The earth tones with the green are just wonderful for Earth Day. Happy Birthday to your daughter!

What a beautiful table, Christine. The colors are so perfect. I love the way you've incorporated so much texture too. That globe is a treasure! Oh, those monkey napkin rings are adorable.

Have fun in Florida Christine! I know, I didn't get any time to put together a table as we just got back from Spring Break with the kids. I love your Earth Day table. You always have the most wonderful figurines and accessories. What a beautiful daughter and beautiful grandchildren. Happy birthday to her!

Happy Birthday to Tina! You have a very nice table with the colors and the animals, and especially the perfect centerpiece!! Happy Earth Day. Linda

Cute family picture of Tina and her family. Hope she has a wonderful Birthday. Your table is perfect. It looks so earthy!

What a lovely post, and Happy Birthday to your daughter!

This table is so well thought out and beautifully put together.

Hi Christine, Your tablescape is beautiful. I love the woodsy look, including the napkin rings, fern, green goblets, and dark napkins. The views after dark with the blue glow of the pool in the background are really stunning. Happy birthday to Tina.
Hugs, Beth

What a great combination of browns and greens. It's always fun to see which dishes you will use that I've never seen before (glasses too!). Those monkeys have the cutest expression, like they are up to no good! We're expecting some well needed rain in FL this weekend but I know you are coming for the company not the sunshine! Enjoy!

I love your globe that you made! And in a cloche, perfect. Beautiful table for Earth Day. You have a beautiful family, those babies are adorable. Blessings xo

I like your take on Earth Day, Christine! The dishes are beautiful, I don't remember seeing them before. Cute monkey nakin holders, guess not too many other. Than dish addicts picture monkeys on their table! :)
The globe is wonderful as the centerpiece!
Thanks for linking to Let's Dish!
Happy bday to Tina, too!

What a wonderful Earth Day table, Christine. Simply gorgeous. The best part of all (IF I had to choose, of course would be the globe) It is exquisite!!

P.S. I meant to wish you Tina a Happy Birthday. Daughters, is there anything more wonderful?? I think not..she is beautiful..how could she be anything else? :)

Hi Christine. I have visited now a few of the Earth day table scapes and really enjoyed them. Yours of course is fabulous with all your special dishes and accessories. P.S. I really love your new profile pic too, your necklace is super pretty, as you are too!

SavoringTime in the Kitchen said...

Beautiful table! I'm in love with your cute, little monkey and what a perfect touch with the globe under the cloche. Everything fits so perfectly together.

What a wonderful family you have!

This setting is really special. SO creative and beautiful. I'm totally in awe of your craft and your sweet family.
Happy Spring.

So pretty Christine. I love that globe under the cloche, and what a great box for a domino set. Wishing Tina a wonderful birthday (such precious photos of her and her family). laurie

What a great idea to do a tablescape around Earth day! I love all the woodsyness to it and the little animals...really fun and unique!! Great job!!
Thanks for linking up to Centerpiece Wednesday!
Karin

What a great tablescape for Earth Day, love the browns and greens, so smart of you. Beautiful and thanks for sharing.

Wow, you work well under pressure. You put together a wonderful table for Earth day, and the monkey napkin ring holder is so unique!

I love your daughter's wedding picture with their dog :-) My kind of couple!

I love your earthy table...beautiful. Using a cloched globe was a great idea for the centerpiece. The monkey napkin rings are adorable.

Your table is very pretty! I like how you combined everything to make them a very sophisticated table. Love the animals statue you set on your table.

Such an interesting tablescape - something wonderful everywhere I looked ! The monkey napkin rings are adorable and the fern was the perfect touch. I love brown, so this table was perfect to me!!

Christine, you made such a beautiful table for Earth Day! I love the natural, woodsy feel to it! The globe under the cloche is my favorite!

What a beautiful tablescape, Christine! So lush, green and tropical! You definitely nailed your theme...fabulous! Happy week!...hugs...Debbie

Hi lovely lady.
One more Beautiful Tablescape for Earth Day as always, and Happy Birthday Tina!!! Thanks so much for your sweet comments on my Earth Day Tablescape. Hope you and your family have a wonderful week coming up.
XXOO Diane

I love your Earth Day Table, those little monkey napkin rings are just adorable and I also like the log with the birds perched on top.

Your china is so pretty and I LOVE your stemware.

Thank You so much for sharing and have fun on your trip!

A very lovely and warm tablescape! You captured the woodsy feel perfectly!

Happy Birthday to your daughter!

I think your Earth Day table is wonderful with all the warm browns and greens. I have been away from blog land and missed this party. Drat. I had wanted to do it, too.

My favorite part of all is the wonderful napkin rings. Those are just spunky!

I love absolutely every little thing on this table! But I really love those monkey napkin rings!It is all so perfect for earth day.

Your tablescape is just gorgeous. I love the colors of nature and all the cute little animals you were able to work into your tablescape. The globe under the cloche is stunning. What a great idea. Thanks tons for joining TTT. Hugs, Marty