One day last week, my friend Debjani dropped by with a bunch of clothes to be repaired. So we went to work in my mom's bedroom where I keep the sewing machine. We were so engrossed in working that I forgot all about lunch. Then around 3 PM, I felt the hunger. Our friend from Alaska sent us a box of smoked salmon and Debjani always wanted me to show her how to make sushi so I decided to have a sushi making lesson.
I will show you the steps at the bottom of the tablescape. I showed Debjani once and she picked it up pretty quickly because it is very easy so I asked her to take over while I created my Japanese tablescape. 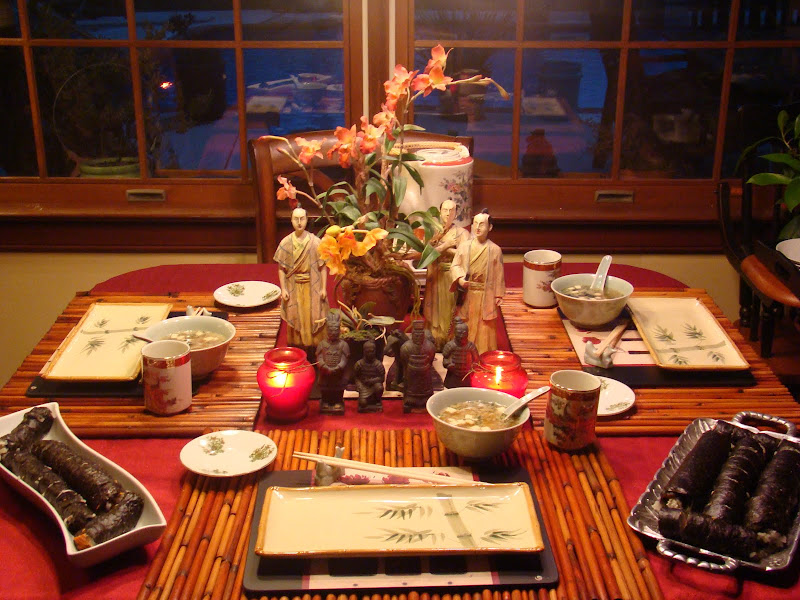 Debjani was quite impressed with how fast I whipped up this tablescape. I wouldn't be, because I forgot to set the napkins before taking pictures, lol. I kept going around the house picking up any Asian item that I could find and forgot an important element. But I added them later.
I pulled out the Japanese and Chinese warriors and the Oriental tea set from the home office shelves, the smaller placemats from the cabinet under the book shelves in the hallway, the celadon soup bowls, spoons and chopsticks rests from the cabinet in the family room, orchids from the family room, the bamboo placemats and serving trays under the kitchen island and chopsticks from the kitchen island drawer. 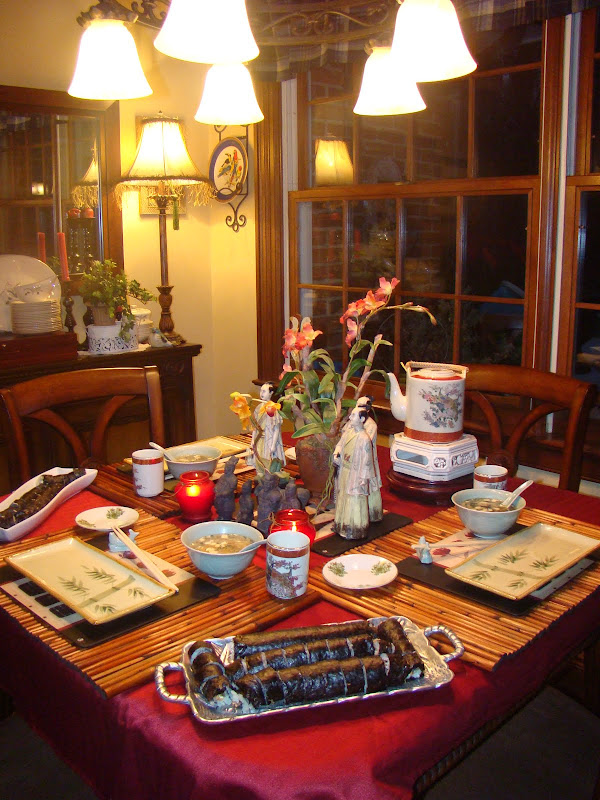 While Debjani was rock and rolling, I made green tea and miso soup and squeezed wasabe on small sauce plates. 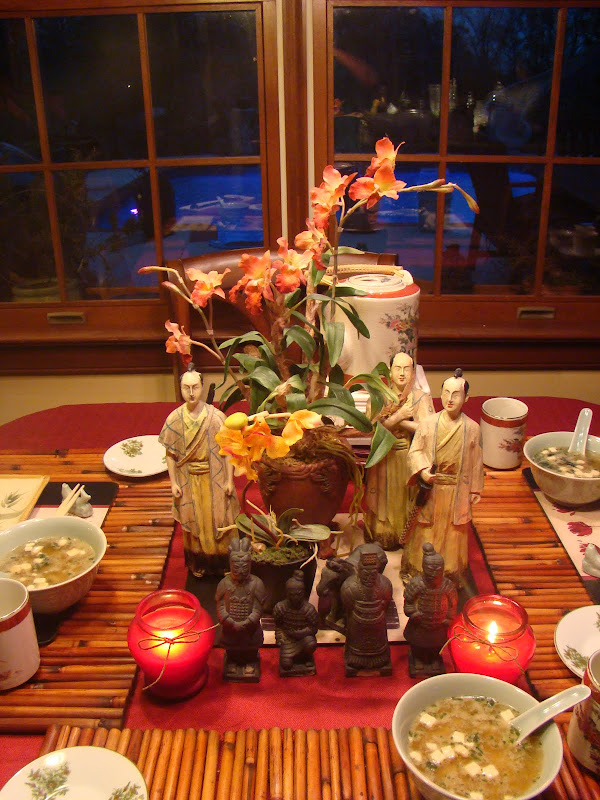 I got the Oriental tea set from Ebay about 3 years ago. 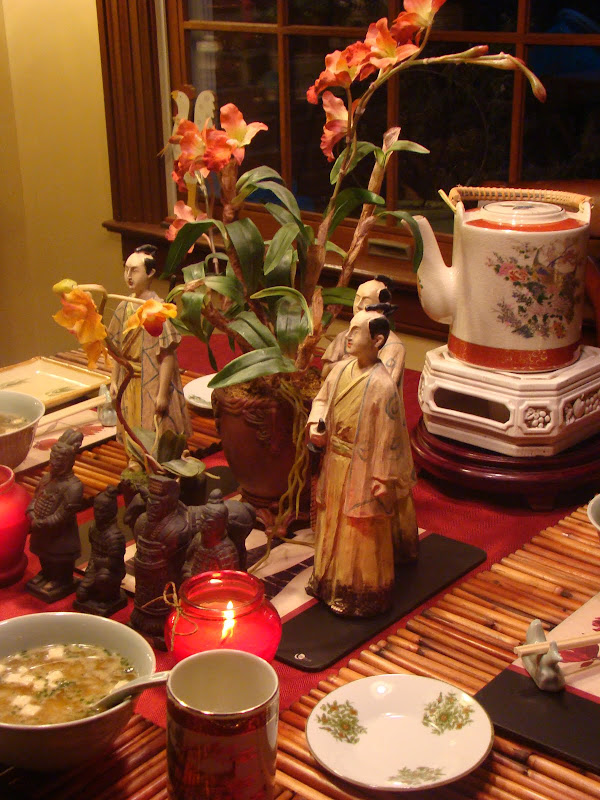 I pulled out these bamboo sushi plates from the buffet server in the formal dining room. I think John bought them from World Market in Sanford, Florida when he used to work there before we moved here. I bought the bamboo placemats from Ross in Port Richey, FL and the smaller red and black rectangular placemats from London. 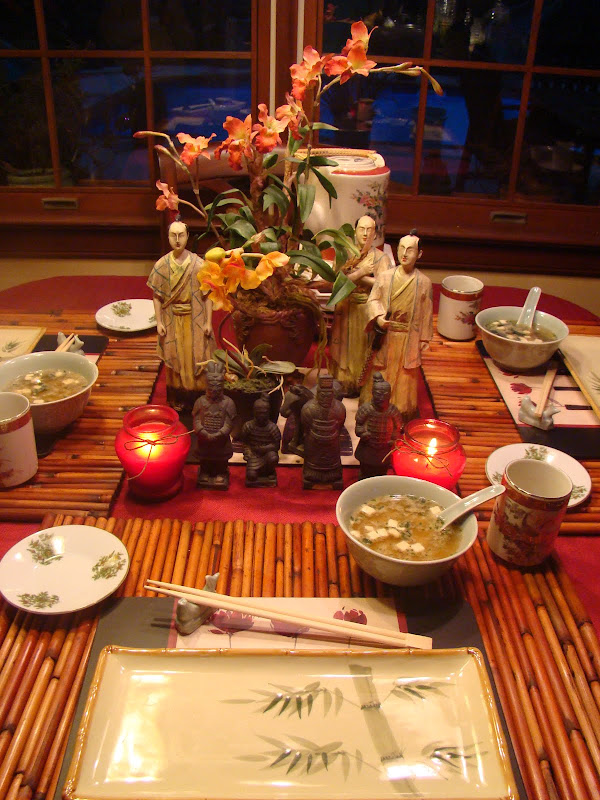 I thought I would use the ceramic cow to serve the soy sauce. That makes it a soy milk, doesn't it? LOL! 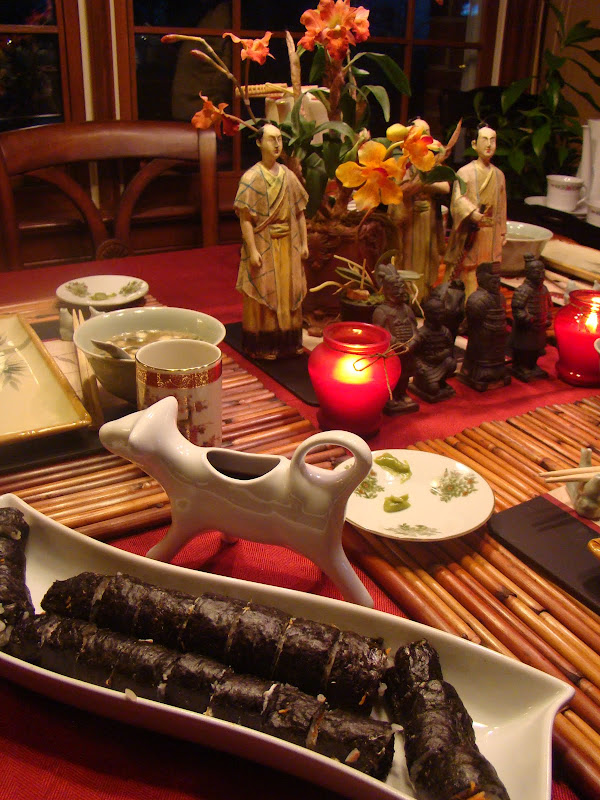 And here are my 2 dinner companions ready to eat. John even came out in his robe saying he is in his Japanese kimono and he started exhibiting his Ninja tactics, lol. 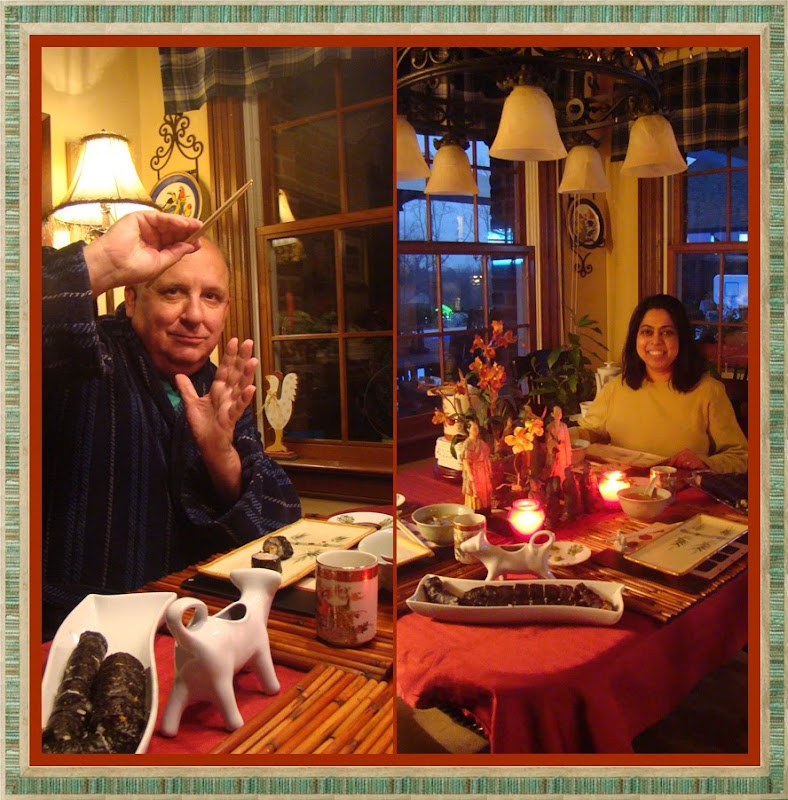 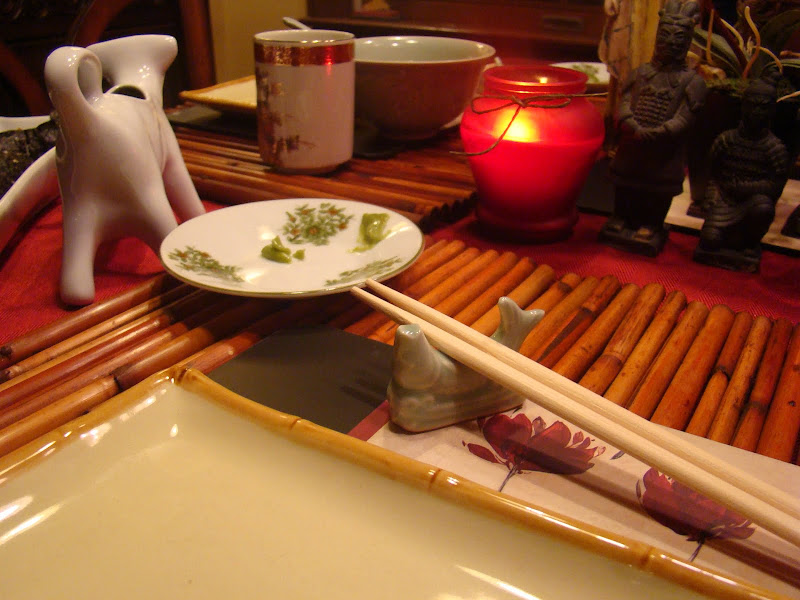 I got the tall Japanese warriors from a closing store in Baton Rouge and my sister gave me the smaller clay Chinese warriors. She bought them from China when she traveled there last year. She said they were part of the treasures they dug out from the Last Emperror's empire. 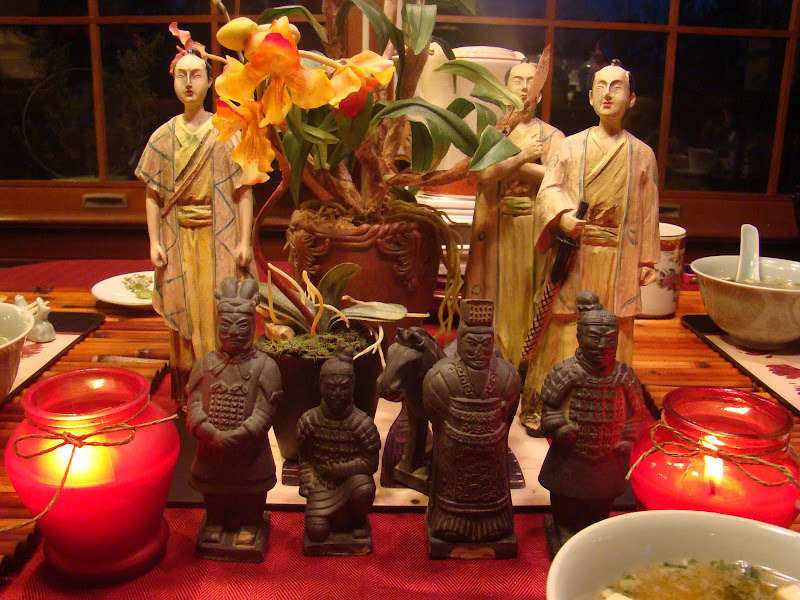 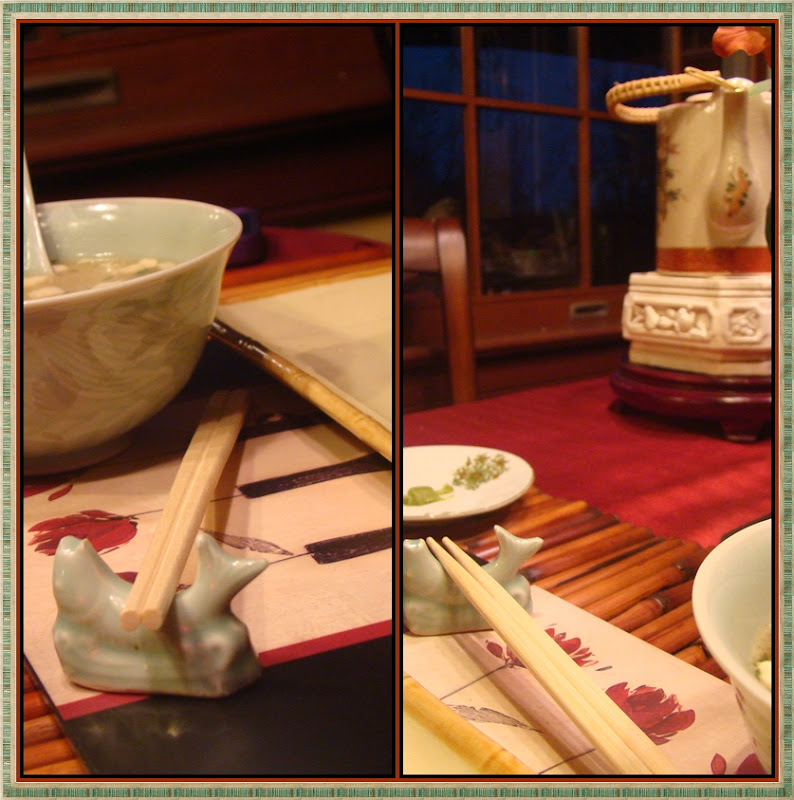 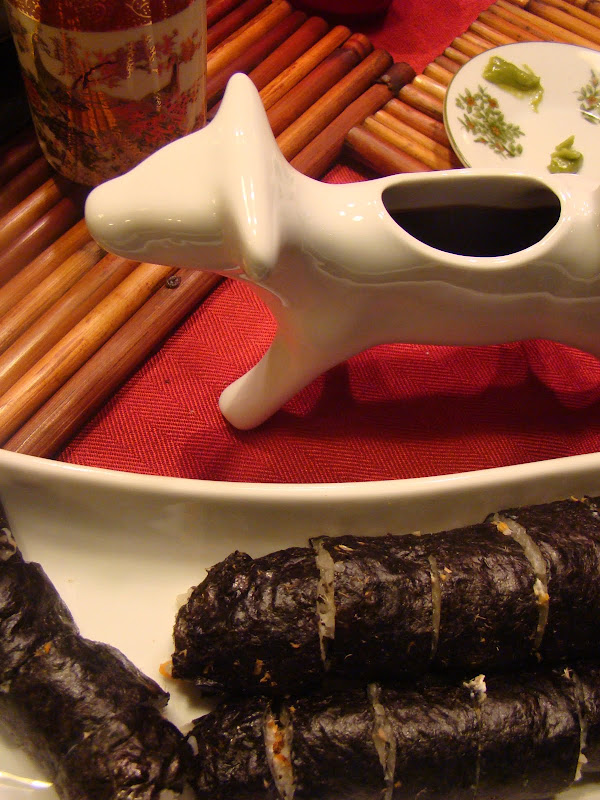 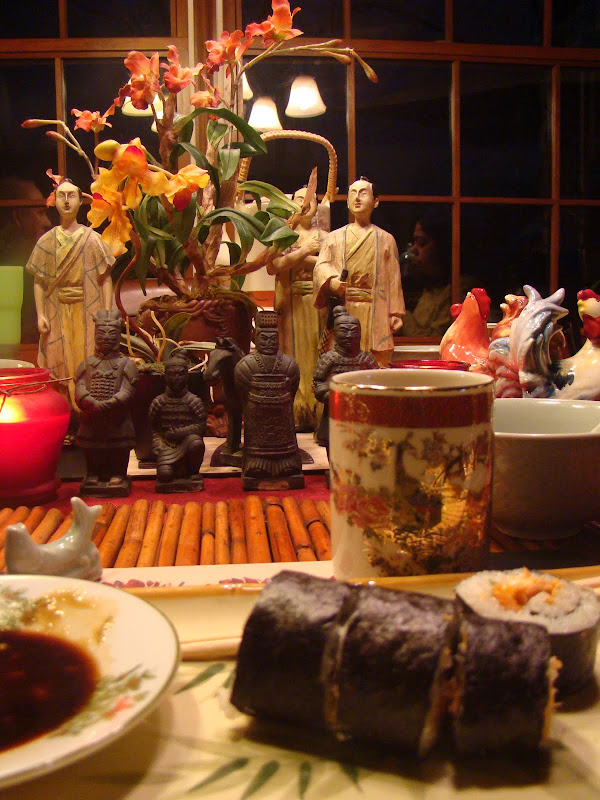 I am going to show you how I make sushi.
You can mix up different fillings like Avocado and crab to make California rolls. But we used smoked salmon because my friend from Alaska just sent me this. It was yummy! We added cream cheese and jalapeno peppers. We actually made 2 kinds omitting the peppers for some of them because John cannot eat hot pepper. I try different flavors sometimes. I have even used mangoes or cucumbers mixed with crab or shrimp in the past. 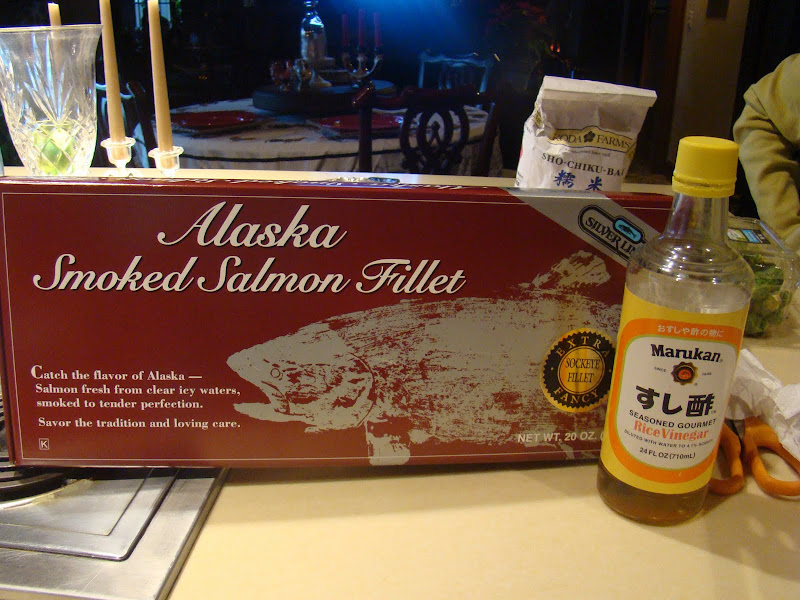 I usually used Kokuho Japanese sticky rice but I did not have any so I used my sweet rice and it was fine. Cook 2 cups of rice. Then add 6 tbsps. of rice vinegar. I used Marukan brand. Mix well. 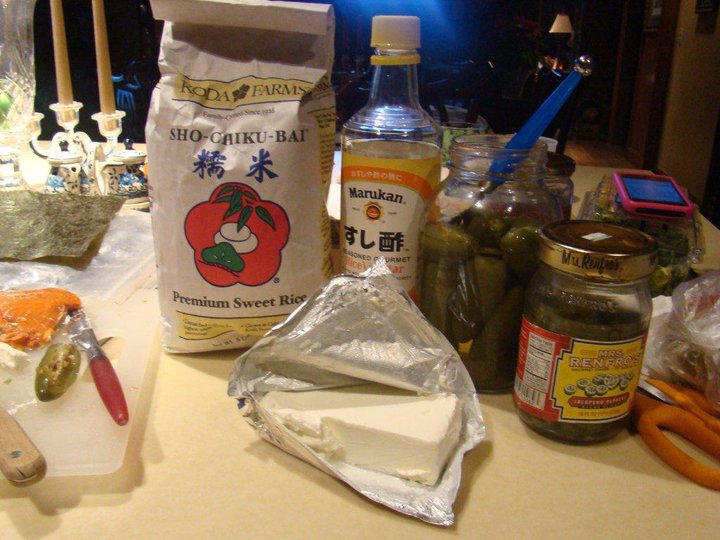 Slice some salmon and cream cheese and jalapeno peppers 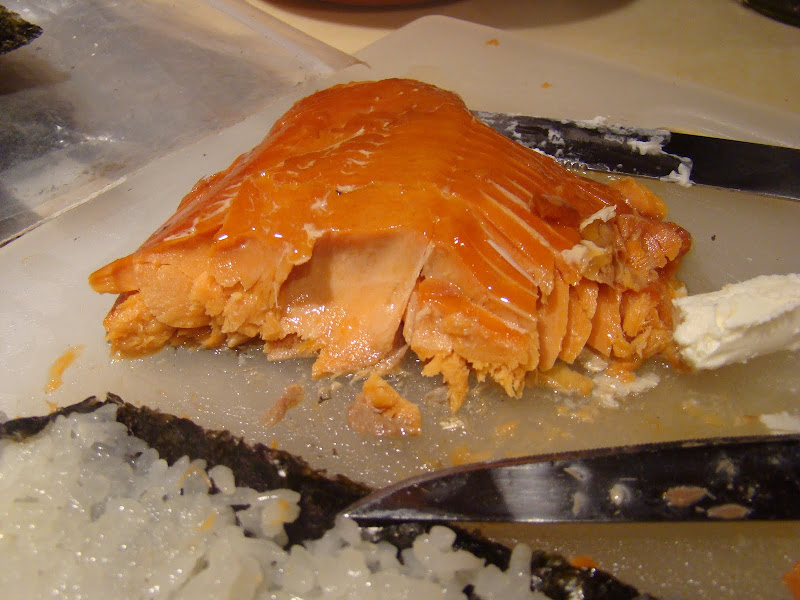 Here is the cooked (steamed) rice mixed with the vinegar. 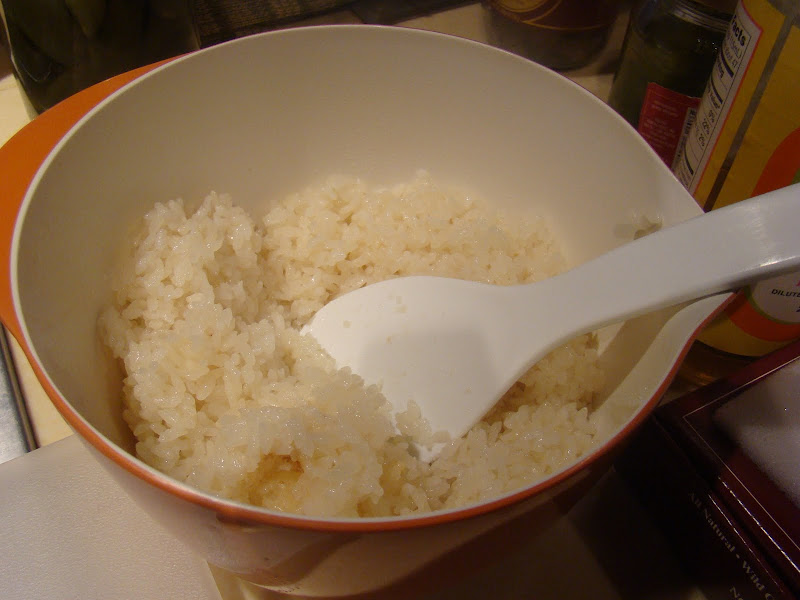 Spread the rice on seaweed wrapper. You can buy this from any Asian market. Then layer the sliced salmon, cream cheese and pepper on one end and roll tightly. Of course you shouldn't forget to wash your hands very well before starting all these. 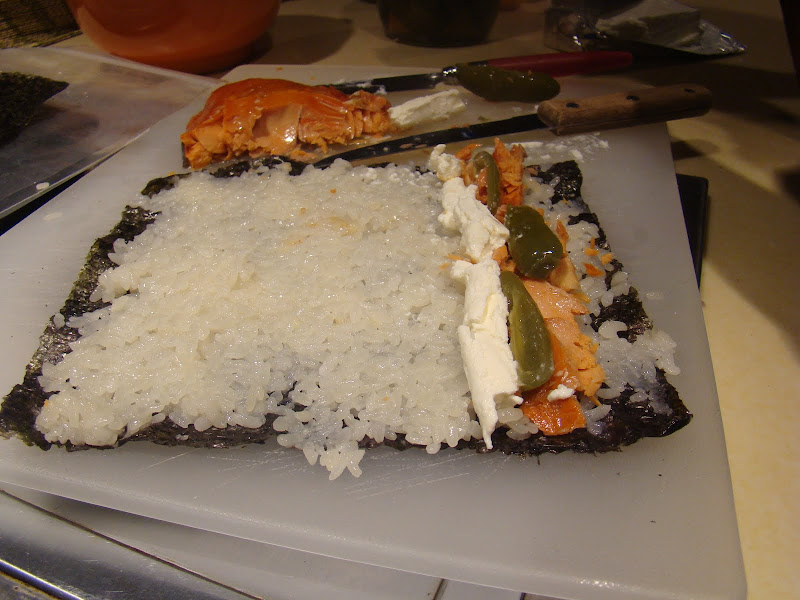 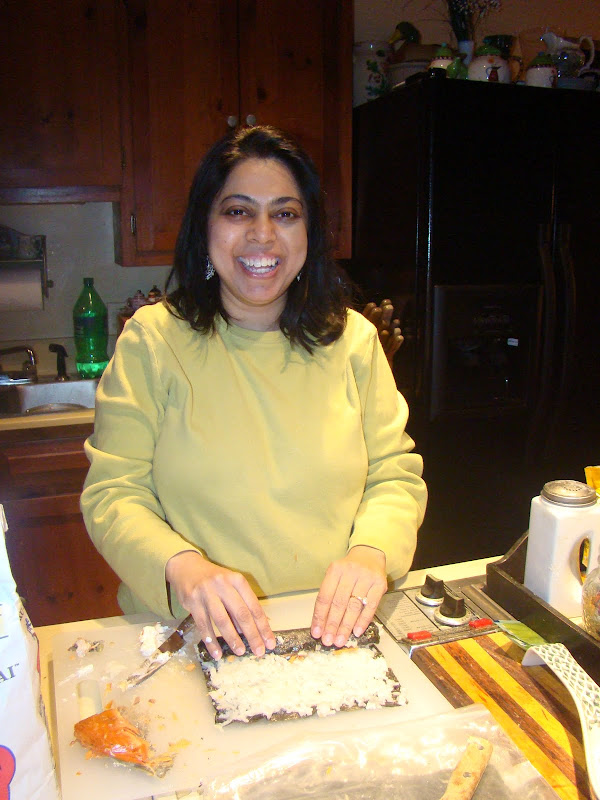 And here are the finished products. Slice them up before serving. Serve with soysauce mixed with wasabe (Japanese horse radish). 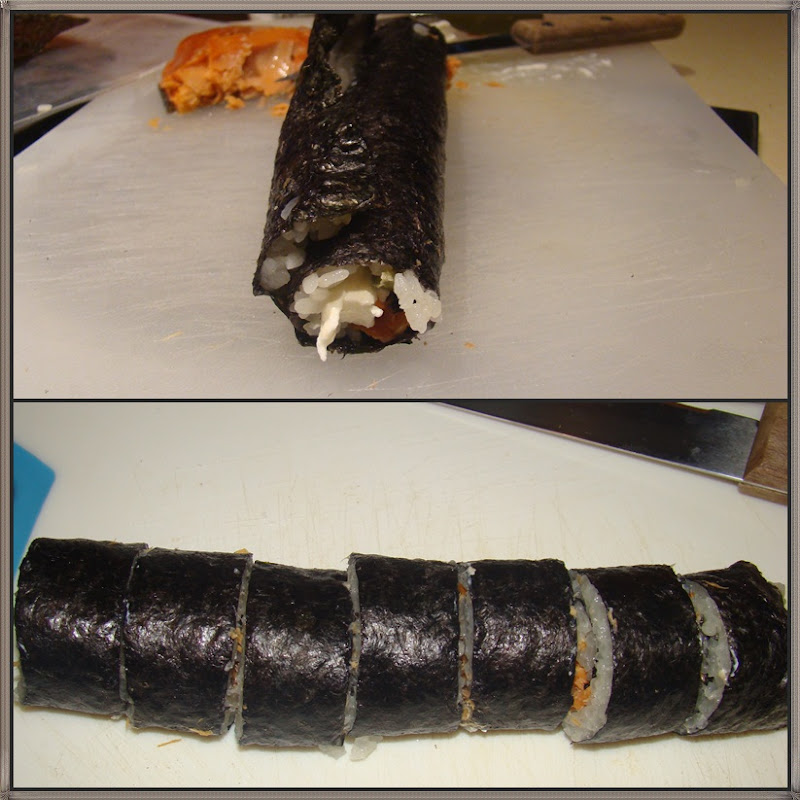 I am joining Susan's Tablescape Thursday party at http://betweennapsontheporch.blogspot.com/ 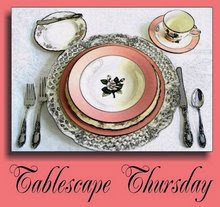 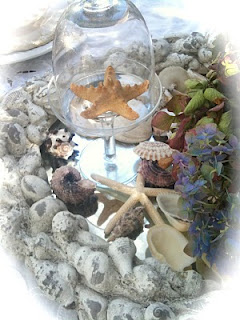 and Gollum's Foodie Friday at http://www.designsbygollum.blogspot.com/ 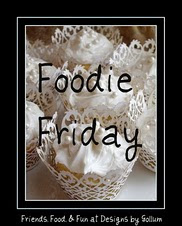 Thanks a lot to our talented hostesses and thank y'all for coming by.

I can't believe you just whipped that all together. You are amazing. The table looks wonderful. You have everything for every type of setting.

The table looks great. I especially like the fish chop stick holders. I've never seen anything like those....really cool and I do love-me some sushi! Yummy!

Christine, you are just amazing to me. You just whip up a tablescape and sushi that looks like that??? Unbelievable! I want to come to your house and take lessons. Fun tablescape.

Your table looks like something right out of a fine Japanese restaurant! You never fail to surprise me with all of the dishes and accessories you have. And how quickly you did it all!

We all love sushi here...especially Abby. We have not mastered the chopsticks yet. I love the combination you made, the salmon looks delicious! Great job...I can tell all of you had fun!

I laughed at the soy milk! So funny. Can't believe you had all this great stuff to just whip up a table. You even had bamboo place mats. You accomplished two things. Now, I want to try to make sushi because I have some smoked salmon that someone sent me too. And I also want to look around for some Asian dishes and whatnots.
It all looks wonderful.

Michelle, All Home and Love said...

That is too funny with the robe! Your table looks great! I'm not a fan of sushi but it looks like fun to prepare!
~Michelle

I love sushi.. I didn't know you put the vinegar in the rice. Thanks for sharing this. I love your plates. I think I'm a sucker for bamboo anything. The placemats are perfect for the setting. As are the warriors. Another stunning table!

Just gorgeous and the cooking lesson was great. Smiling faces around the dinner table was the best photo.

Oh it looks wonderful and your tablescape is fabulous. You have such pretty things and you always arrange them in such a wonderful tablescape. Love the lesson, however I want to know how to make the soup. It looks soooooo good. Hugs, Marty

Christine, you have the most amazing collections! I am totally impressed that you pulled that tablescape together so quickly -- AND made the meal to go with it!

Your did a great job - very pretty! I am surprised they would sell the statues if they were from the emperor's empire. You are fortunate to have them.
Enjoy your day.

I'm not a huge sushi fan, but I love miso soup. Your table is perfect, I can't believe how quickly you pulled it all together. Love the chopstick rests and the orchids are lovely. Looks like a fun afternoon, and your husband made me laugh! Kat

The Charm of Home said...

Oh, how nice! It looks like I'm on vacation here today. Lovely table Christine. I have never seen chopstick rest, they are cute. Very nice meal and great atmosphere with you table.
Sherry

You've created a virtual "party in a post." The elements that you had available for your tablescape are perfect! My eye immediately locked on the wonderful tea pot on the stand...and the warriors...and the chopsticks holders...and...and... So well conceived! Thank you for sharing your delightful design. Cherry Kay

Lovely table and meal. My favorite things are the celadon chopstick holders!!!

Christine, I just love this tablescape! It is amazing that you just pulled this together so quickly. Love the plates and the teapot and the warriors. The food looks great too, especially the soup.
Hugs and blessings, Beth

I don't eat sushi, but my sister and her family love it. In fact I gave her my asian dishes and accesories since they eat it so often. I don't know if she has ever made it herself. Your table looks beautiful. It certainly doesn't look like something you pulled together quickly! Looks like fun!

Christine I'm so late commenting because I was with you! What a pleasure BTW! Your tablescape is fabulous as always! But I have to say I see a marked improvement in your pictures. They look like shots from a magazine! John in his robe being a ninja....so cute! And Debjani is so pretty! Is she a blogger too? Anyhoo can you come back to my state tomorrow Christine? You took the sun with you. It's been gray and dreary today. Plus we did only hit one store! Granted we were in it a little over 4 hrs *winks* Vanna

Your table looked great as always. Looks like you had a fun time. You are the Martha Stewart of Natchez!!

Christine, you must be a power ball of energy. What a party for the spur of the moment! Thanks for the lesson. ~ Sarah

That table is just stunning Christine!
And your an amazing cook too!
Happy Weekend friend,
Cindy

Lovely! What a fun meal to have!

I'm having the very first GIVEAWAY on my blog. Please stop by to submit an entry. Good luck.

Christine, you are an amazing lady with incredible energy. I love spending time on your blog and looking at your beautiful home and and what you create there.

What a great tablescape! You are truly prepared for anything!

I love the beautiful tablescape.....
You're so amazing how you put your decorations and food together so easily.....Beautiful and delicious looking!

"Soy milk." Hilarious!!! I LOVE this table! It is perfect! The centerpiece you created is fabulous, and you just did an outstanding job all around. Terrific!!!

I really enjoyed your tablescape and dinner. I bet your friend just loved it! Okay, now I want to hear your Miso soup recipe.

Oh that looked fun! And delicious....I love all your Japanese pieces, they are awesome Christine. Have a wonderful weekend. Debbie

This is a truly awesome tablescape. I feel like I have been transported to another country. I can taste the miso soup and sushi. Thank you for sharing this special post with us. We will be anticapating your next post. Hope to see you soon at TTTT.
Blessings,
Pam

What a great tablescape~ It really came out just beautiful! I love all your pieces and how lovely they are together! Looks like it was a wonderful get together- thank you for sharing at Feathered Nest Friday! :)

the table looks amazing! i love salmon. i would love to know how to make miso soup!
blessings,
aimee

I really love this tablescape. I love when bloggers share the menu too. All the details are beautiful. I would love a bowl of miso soup right now! I may just have to make it this weekend...it is very chilly soup weather here!

Oh Christin...the celadon rests and nups and other things like that... just remember my daughter Alexandra, who loves sushi just decided one day that she wanted and took them home! To another city 2 hrs. away by plane! Anyway, you're amazing my friend...just gorgeous! I'm going to the next Oriental post now.
Love
FABBY