It's Saturday again so it's time to go on another trip. 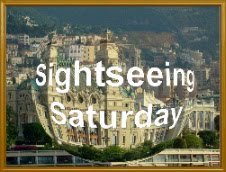 But first, let me share some pink and blue favorites.
I am linking with Beverly for Pink Saturday at http://howsweetthesound.typepad.com/my_weblog/

I am also linking with Laurie for One of my Favorite Things at http://bargainhuntingwithlaurie.blogspot.com/ 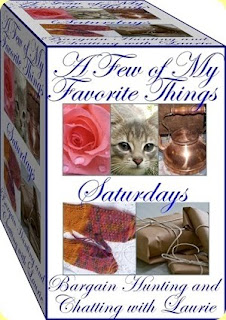 and with Sally for Blue Monday at http://smilingsally.blogspot.ccom/

My pink contribution is this tea or coffee set, I won it on Ebay. It's Bavarian in Winterling pattern. I just love those pink flowers! 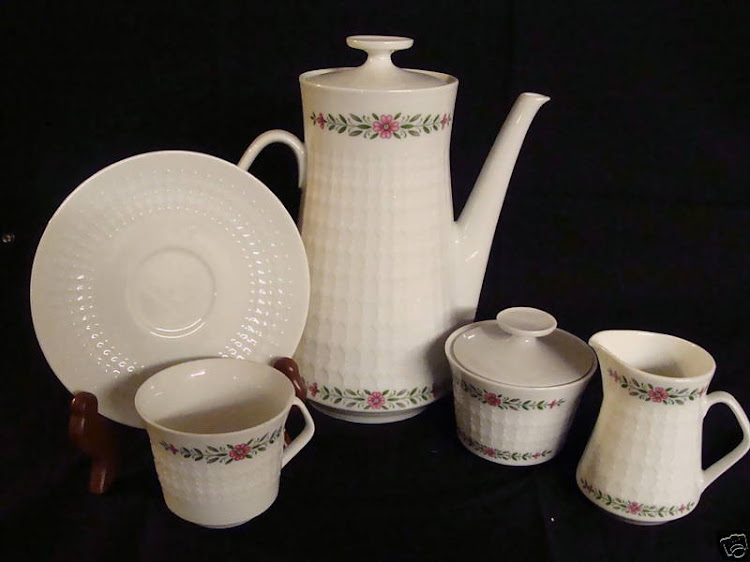 And now, let's go on a
tour. We are going on a nearby city, Brookhaven.
They had a craft sale about month or 2 ago, 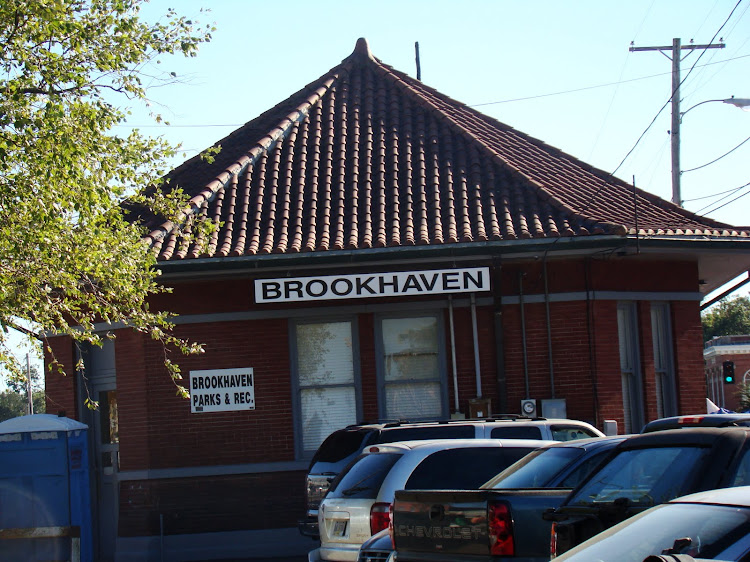 All we bought was a wo0den bird house from the store below. 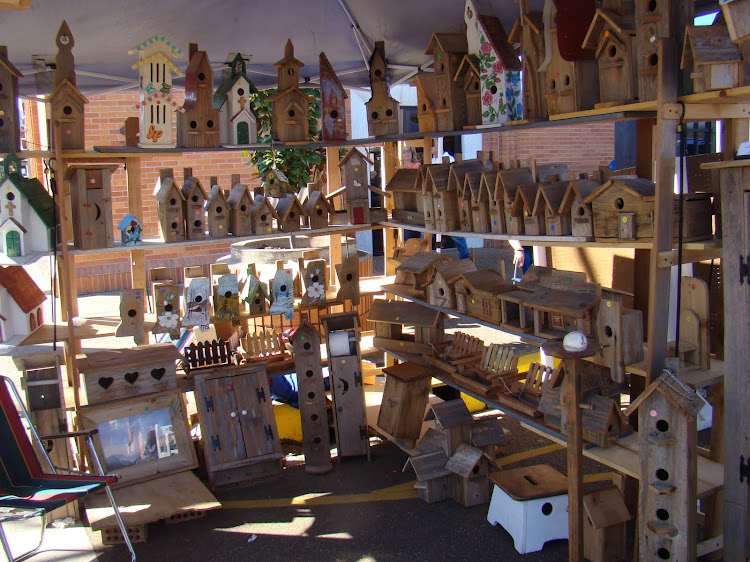 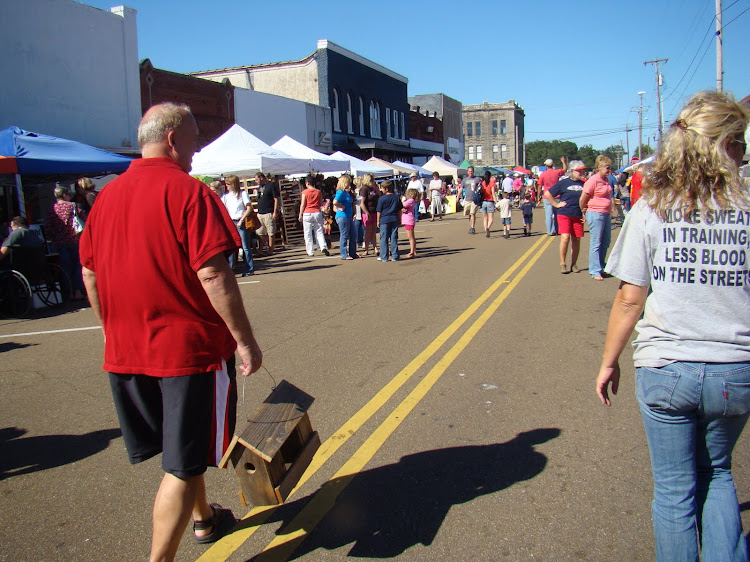 Had to pose with Sarah Palin. 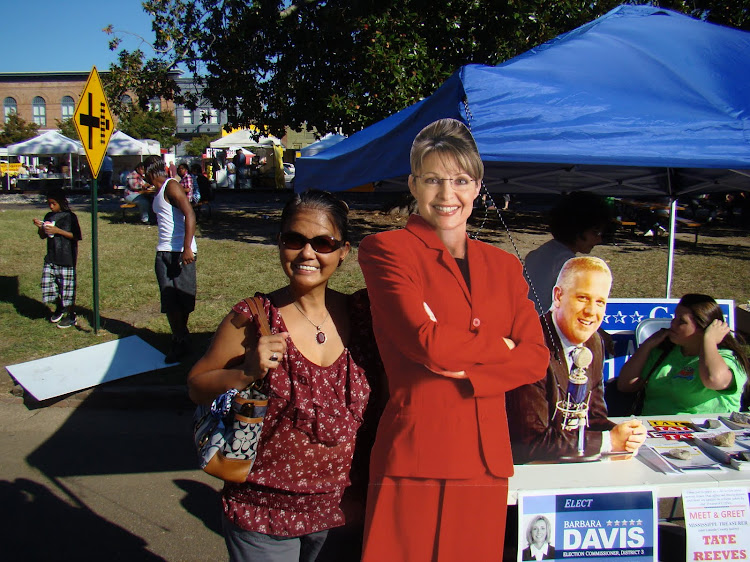 Last weekend was another event. They had an antique estate auction in the biggest mansion there.

It was cold! We had a freeze for the first time this season. Isn't the fog beautiful? 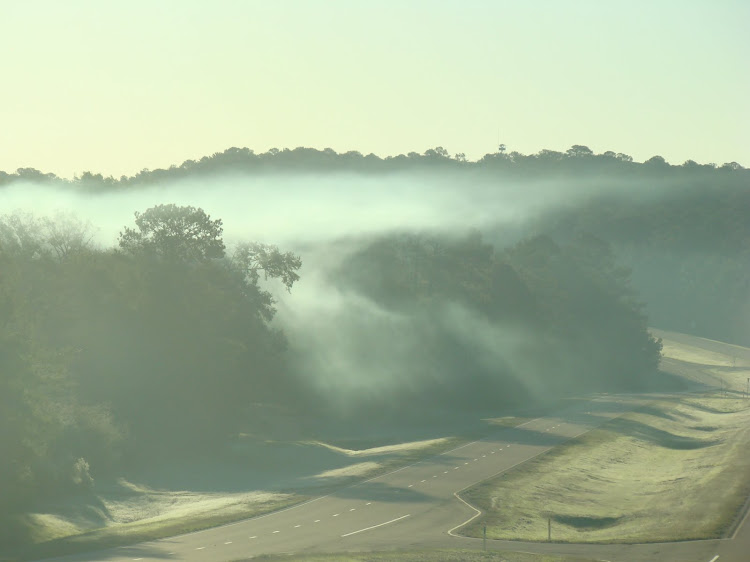 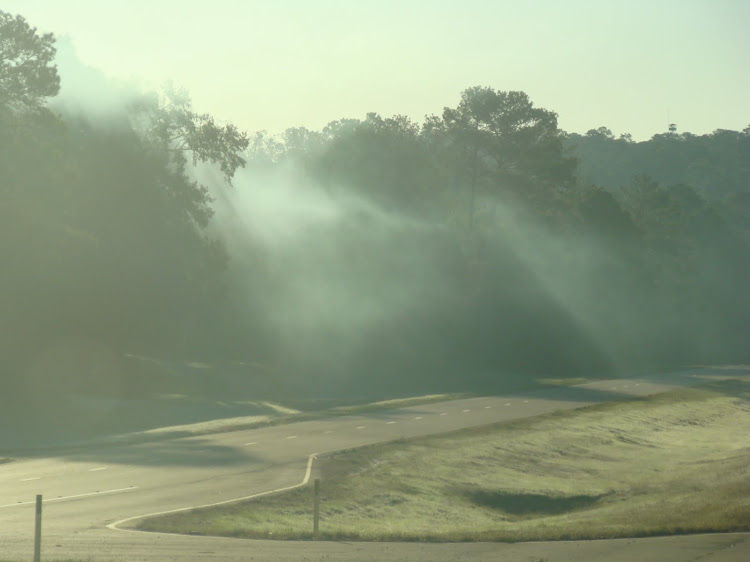 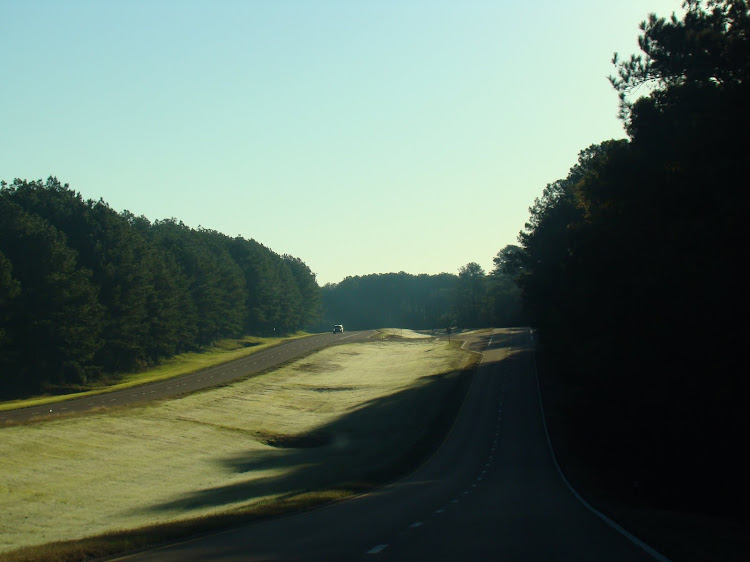 These are just houses that we passed by on our way to Brookhaven.? 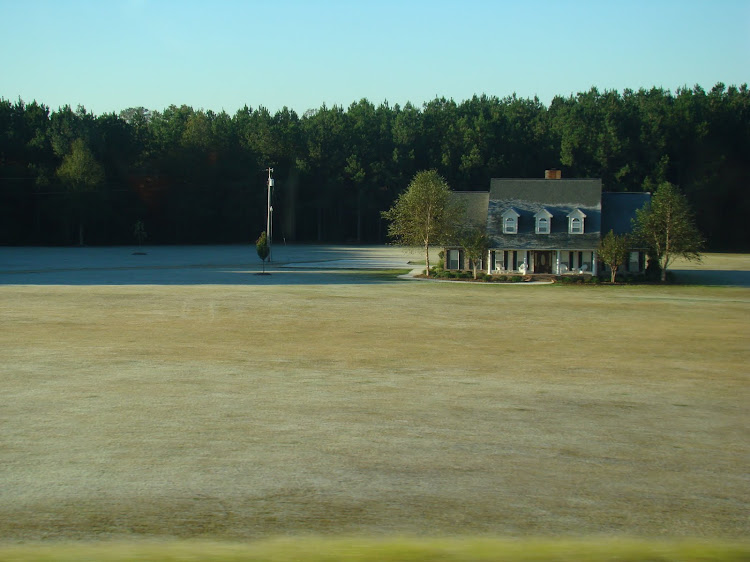 This i s the house where all the antique furniture came from. The owner is not gone yet but he auctioned the furniture to raise money so he can fix the house. 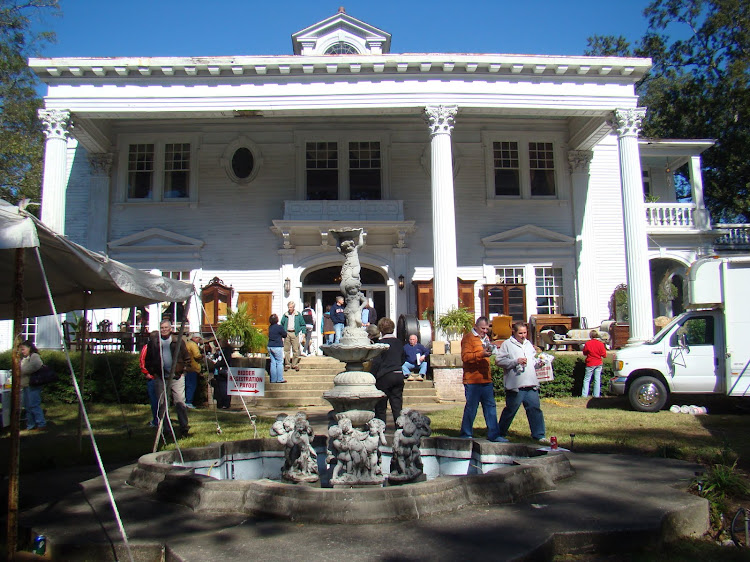 I love the conservatory. 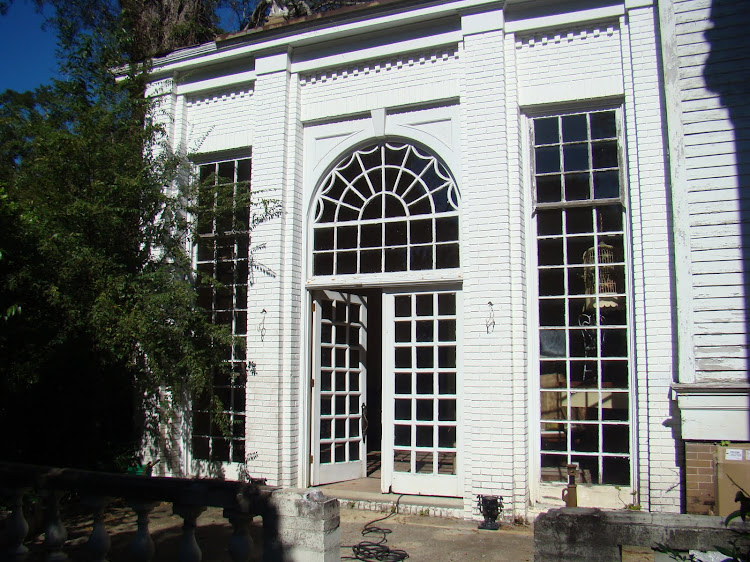 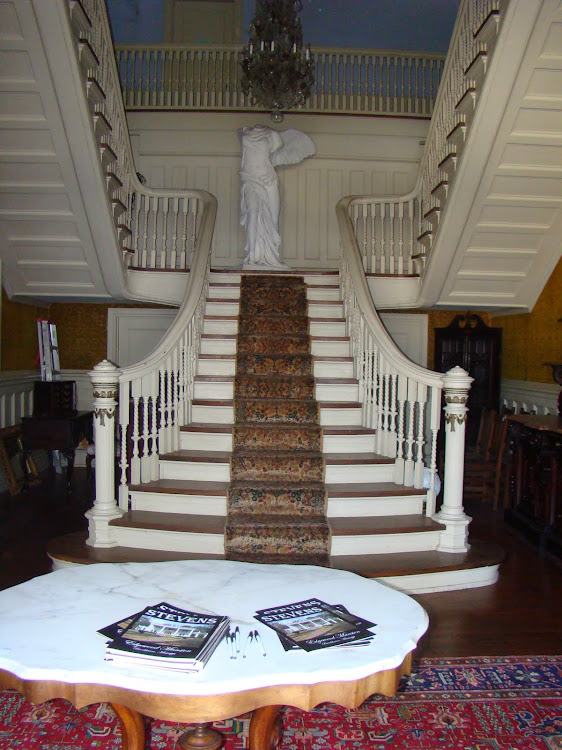 I think this is one of the most beautiful antiques that I have ever seen. It even has a Sevres medallion in the front. It is so gorgeous, the picture does not do it justice. I would have loved to bid on it but bidding just kept going higher and higher in the thousands. 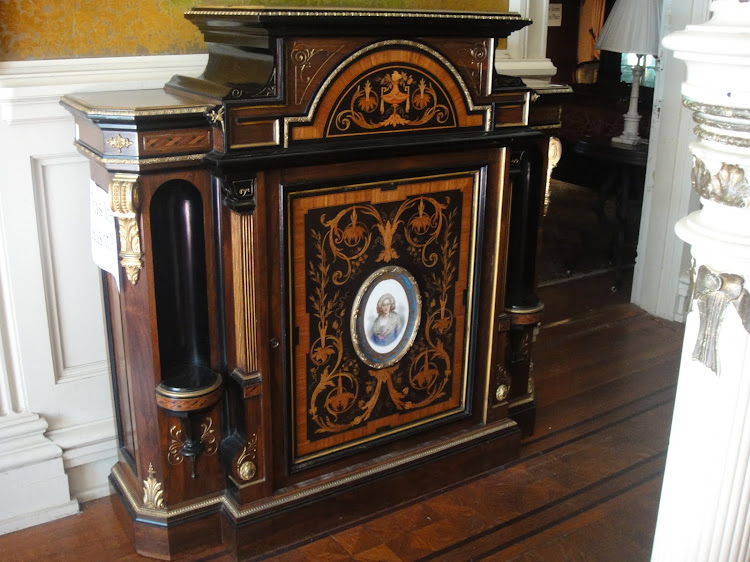 That clock is musical also and it went up really high too. 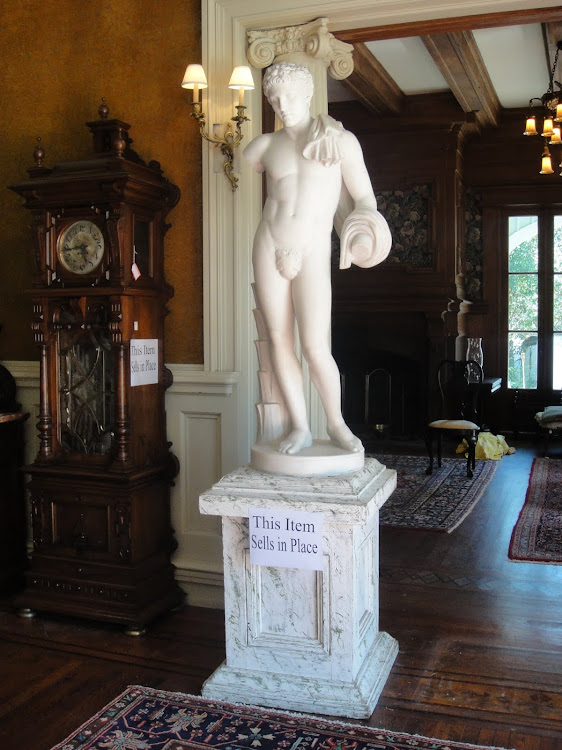 I could not believe all the antiques this guy had and most of them were in excellent shape. 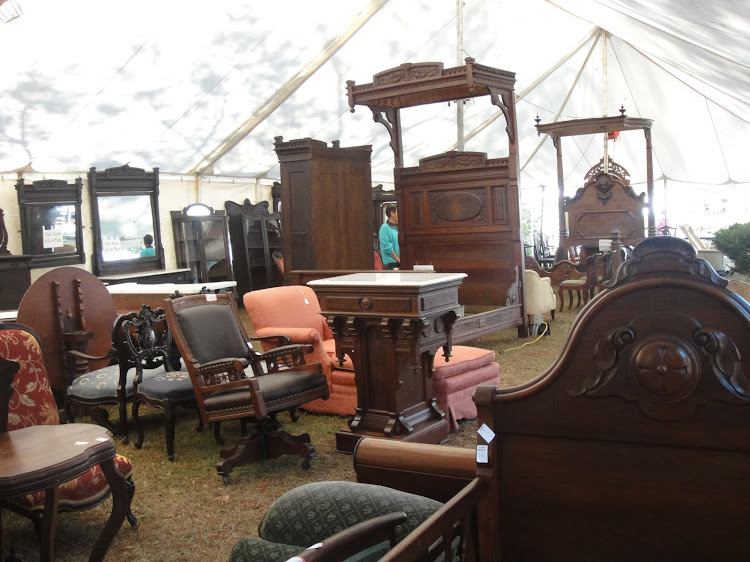 I wanted these 2 end tables for our grandkids guest room but we stopped bidding after a certain amount. 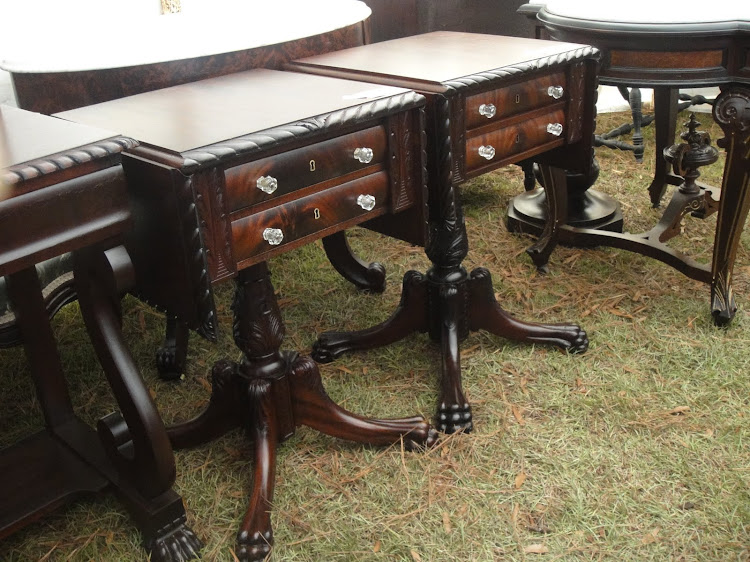 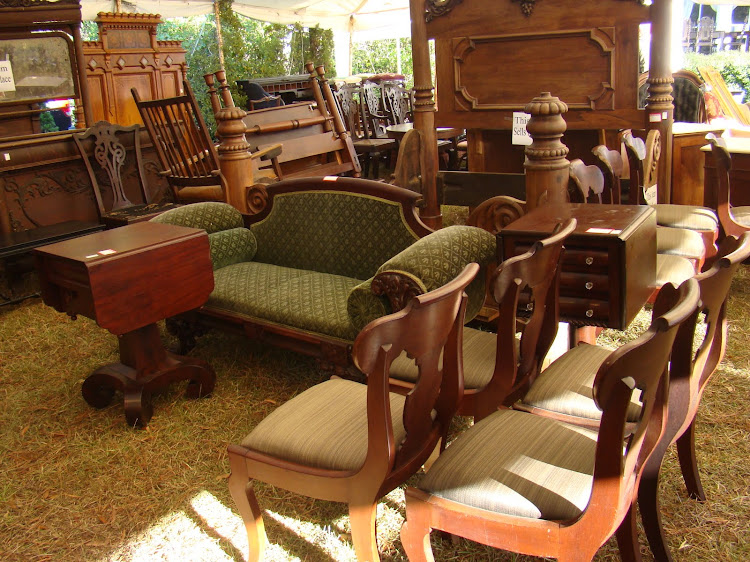 The auction was only starting when hubby handed me our numbered card while he went to buy a hot chocolate for mama. He shouldn't have left me because this parlor set came out for bidding and I started bidding on it. Luckily, the bidders were not hot yet so the price did not go up too high or I would have stopped bidding. I won it! Was John surprised when he got back and I told him I already won a furniture set, lol!
We did not get anything else except for a Tiffany signed opal ring with small diamonds which we paid slightly more than what we paid for the parlor set. 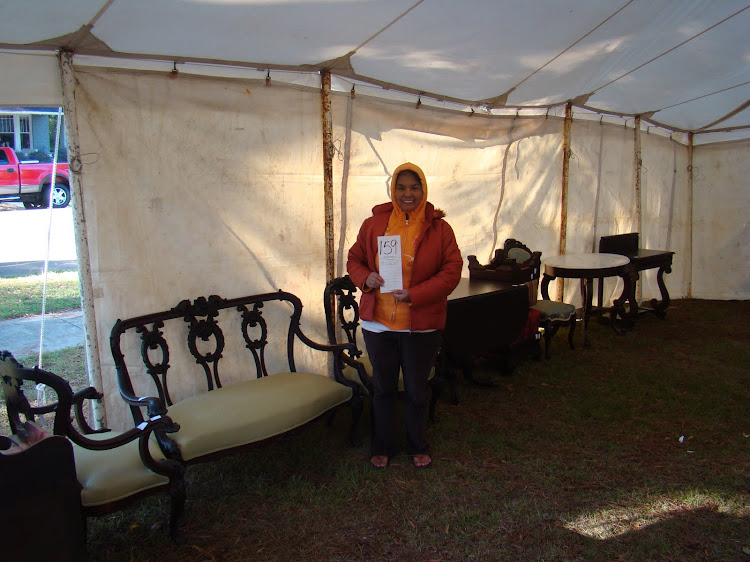 There were so many beautiful beds. 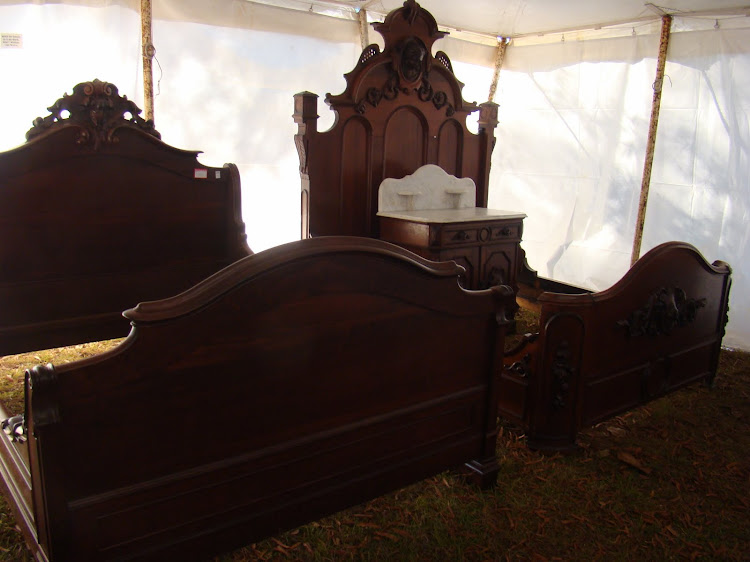 John placed a bid on this set but stopped at $1400. I can't remember how much higher it went. The set is really pretty and it has inlaid Mother of pearls on the wood. The color is really pretty too. 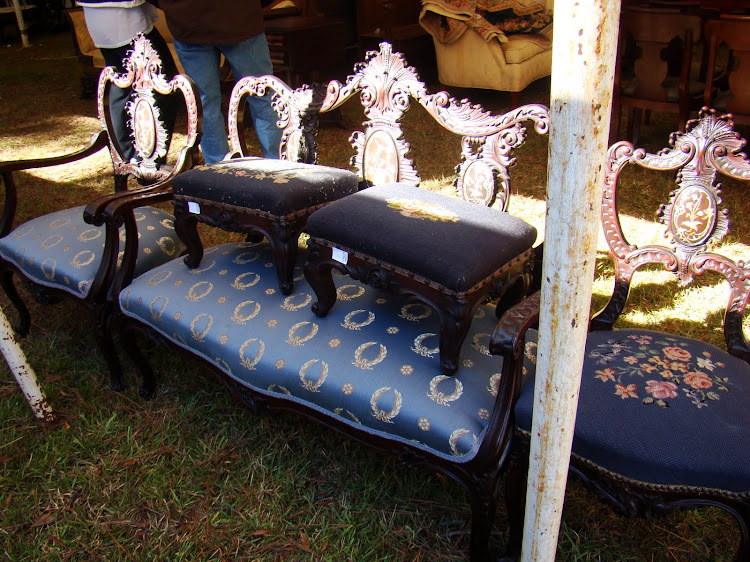 There were quite a lot of bidders there. We left early because we saw one of John's patients there and he offered to help us haul the furniture in his van and he had to leave early. 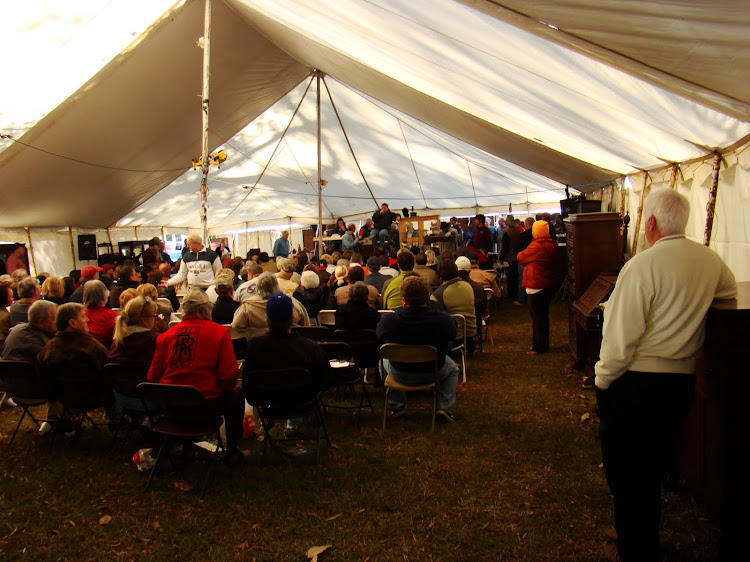 So many guns and so many gun entusiasts there cause they were going so high. 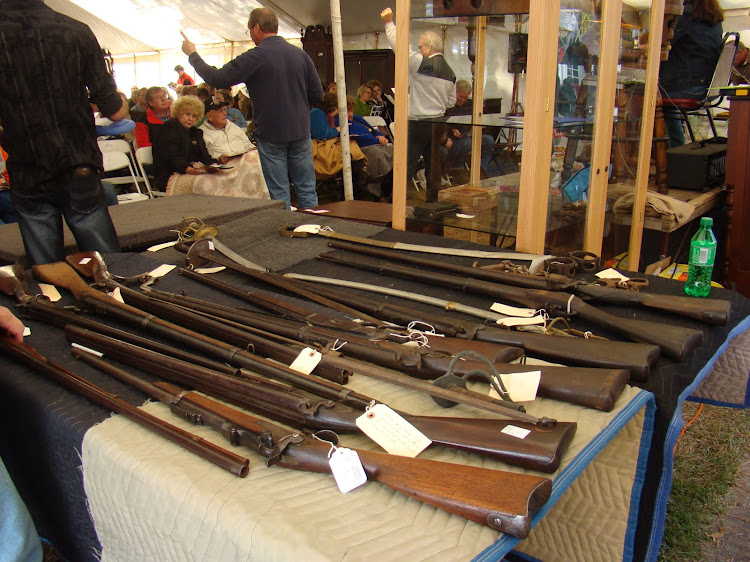 This was my favorite. I have never seen so much Wedgwood jasperware in one place in the same pattern and color. Truly exquisite! There were over 320 pieces. John asked me if I wanted them and if I wanted him to bid but I could not see spending over $4000 for a set of dishes. Besides, where would I store them? So, I said "No!". The table sits 22 And people were bidding on it. They must all have big dining rooms because this is a palace size set. 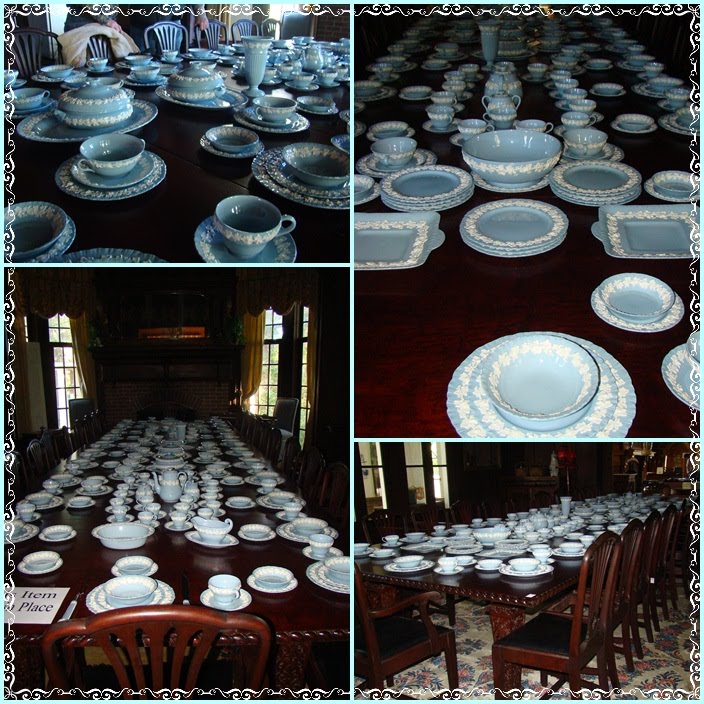 Thank you again for hosting, Beverly, Laurie and Sally and thank you all for stopping by!

Oh my... I can't get over that house! It's stunning, and like you, I love the conservatory. That dining table is a dream come true. And at first I thought my eyes were playing a trick on me when I saw all that jasperware. How sweet your hubby asked if you wanted it. My hubby would not have been so accommodating.

Wow, what a day! That table is probably as big as my whole house! Love your new parlor set Christine-enjoy:@)

So many interesting photos to enjoy :)

Christine,
What a fun day! The dishes are lovely and I love the parlor set. We are off to go antiquing today!

Wow! I wish I could have gotten one of the bedroom sets for my old Victorian! Love your parlor set!!! I have never seen that much Jasperware ever. Looks like you had a fun and productive time!

Wowie- that house was full of amazing Victorian era antiques! Glad you won your bid. I'm sure it will make a wonderful addition to your home, Christine! ~ Sue

Oh, lucky you for such a lucky day!! As soon as I saw the photo of the staircase, I gasped. What a beautiful, beautiful day to enjoy.

A lot of beautiful pieces of furniture! Curious - did all that furniture actually furnish the house, or was some of it stored elsewhere prior to the sale?
Enjoy your weekend.

This was a wonderful trip to cap off our return from Natchez! We had such a wonderful time with you, John and Debjani!!!!!!! XOXO

I love a good craft fair. The countryside looks so beautiful. That estate sale was awesome. All the beautiful furniture. Love those beds! You do the coolest things.

Wow, Can you say opulence...So many possessions it's wild. Loved your taking me along on your day. Happy Pink Saturday.

Christme,
OMG!! What a dazzling array of the most gorgeous antique pieces i have ever seen!
Just beautiful!! I love the set you bought! I bet John was surprised when you got to work bidding so fast! LOL!!

Part 2 of the Country Folks Christmas Tour is posted so please stop by A Debbie -Dabble Christmas when you get a chance!

What eye candy! I'll take one of everything!
Your ebay tea set is so pretty.
Love your picture by Sarah Palin. Cute!

OMG!.....OMG!.......OMG!... Did I ever pick the perfect day to come by your blog for a visit Christine!!! Every picture is making me drooly! What an amazing house! And the antiques...all those tester beds in one place (sooo rare) And all that jasperware....I'm hyperventilating...NEVER would you find an auction like that in my state. I wish that sevres beauty could have gone home with you! And I wish you could have snabbed that incredible french chandelier in the foyer for me *swoons* But you did score a beautiful parlour set! OK I need to go back and read the whole post again....and quite probably again again lol! Vanna

Christine, it looks like the auction was worth attending just to see the mansion! It looks beautiful. The parlor set is so pretty. Where are you going to put it? I was laughing about John walking away from you for a few mins. and coming back to find you had bought a set of furniture! He should have learned after your first auction, when he went to work and you called him and told him you needed trucks! What neat photographs of the fog, and that coffee set you won on ebay is so pretty. Thank you for linking up. (Can't wait to see where you put the parlor set). laurie

Holy Moley I have never seen so many beautiful pieces in one place! I wonder if they all came with the house or he was just a collector. Did you get to tour the house? Your parlor set is beautiful, I hope you really enjoy it! Happy Pink Saturday!

What a wonderful tour. Thanks so much. I'm drooling over the jasperware.

What a house, what a sale; and all of that Wedgwood was unbelievable. Loved what you did buy! Sally

Wow, this is a seriously impressive auction! Some really fantastic pieces - congrats on winning the parlor set :-)

The pictures of the foggy hills are beautiful :-)

Wow, Christine...that was an exciting auction. It is nice to know that the owner is more concerned with keeping his home than the stuff inside. The parlor set is wonderful. There were some really beautiful pieces of furniture there. Thanks for taking us along!

ohh my....they are gorgeous. I have only seen this kind of furniture from castles and manor houses but even the late Alfred Nobel's manor house in Karlskoga looks simplier.

Thanks for sharing a lovely tour.

Oh my! Beautiful "fog" fotos. And we love auctions! Those are truly amazing pieces and wow! There were so many items up for auction. How fun that you won your bid on the parlor set. (Funny that John stepped away for a "minute" and that he came back to your winnings. :o)

A beautiful home...it sounds like the owner must have done very well, so hopefully he gets all that he needs for the repairs he wants done.

Blessings & Aloha!
I am out the door for work but wanted to stop and say hi and thank you for stopping by!

Wow, your photos are amazing! I would have had to rent a United Van lines truck to haul all of those goodies back to my home!