We just got back from a trip to Charleston, SC last Sunday. Charleston is a very beautiful city. I really had a great time there and I sure am going to miss it. We toured the antebellum houses on Church St. the 3rd day we were there and then we ended up here at the boardwalk along Ashley River.

According to Wikipedia,
"The Ashley River is a blackwater / tidal river in South Carolina, rising from the Wassamassaw and Great Cypress Swamps in western Berkeley County. It consolidates its main channel about five miles west of Summerville, widening into a tidal estuary just south of Fort Dorchester. The river then flows for approximately 17 miles along the historical banks of the City of North Charleston before reaching peninsular Charleston. The much wider Ashley joins the Cooper River off the Battery in Charleston to form Charleston Harbor before discharging into the Atlantic Ocean.

The river was named for Anthony Ashley Cooper, 1st Earl of Shaftesbury and chief Lord Proprietor of the Carolina Colony. Charleston was founded on the western bank of the Ashley in 1670 (at Charles Towne Landing), before moving across to its current peninsular location ten years later. " 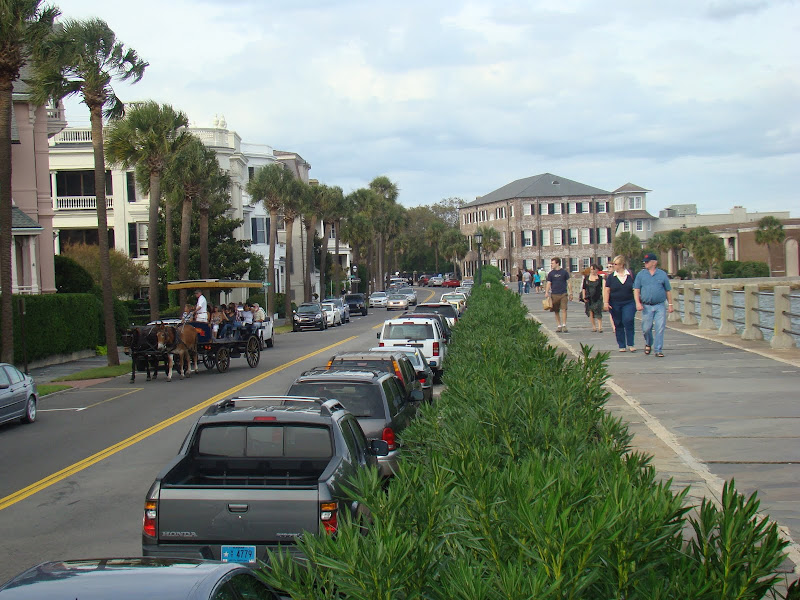 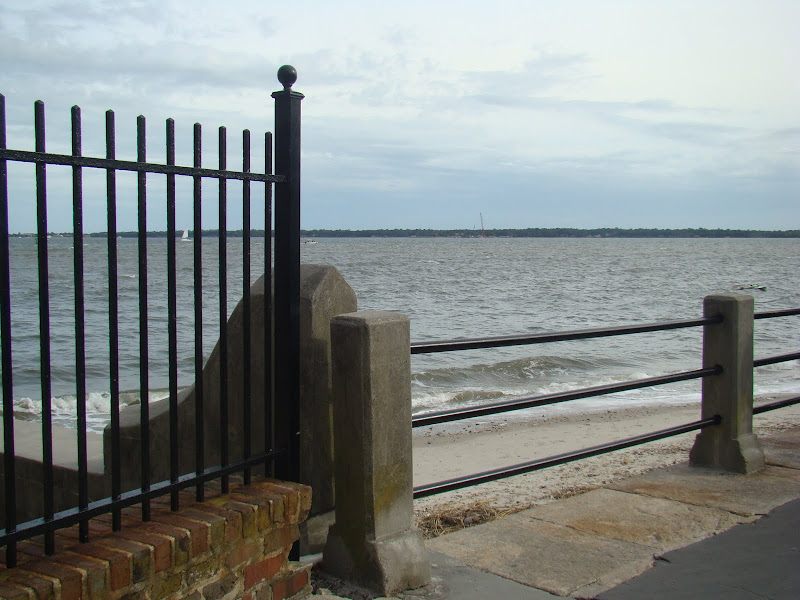 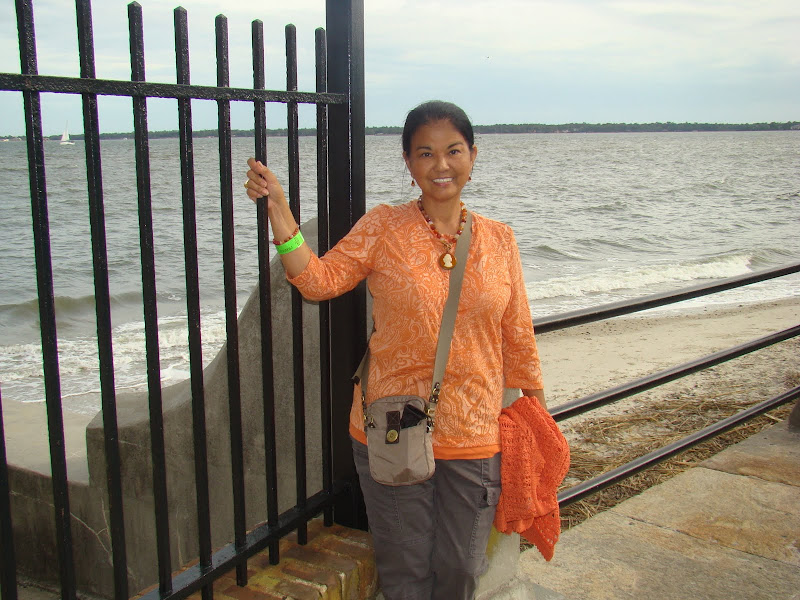 John and I match, lol, and no, we did not plan it. 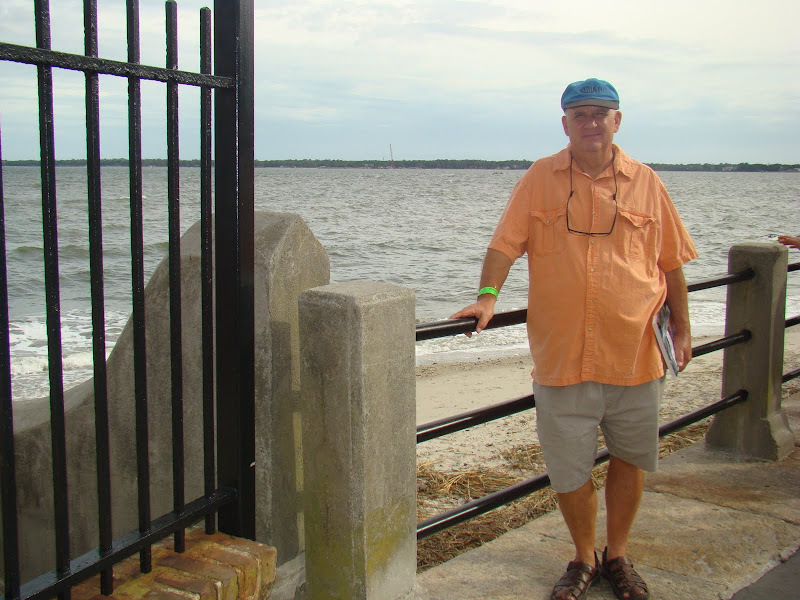 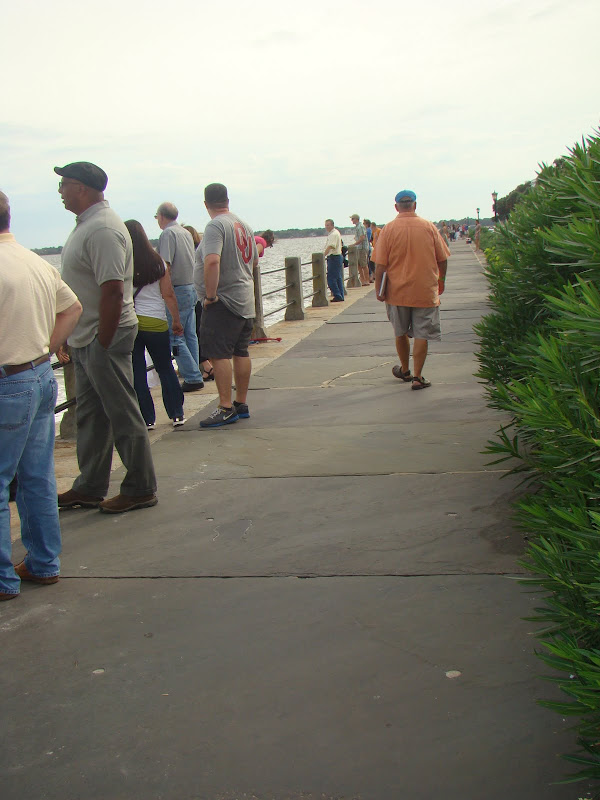 It was fun to watch the dogs playing in the water. 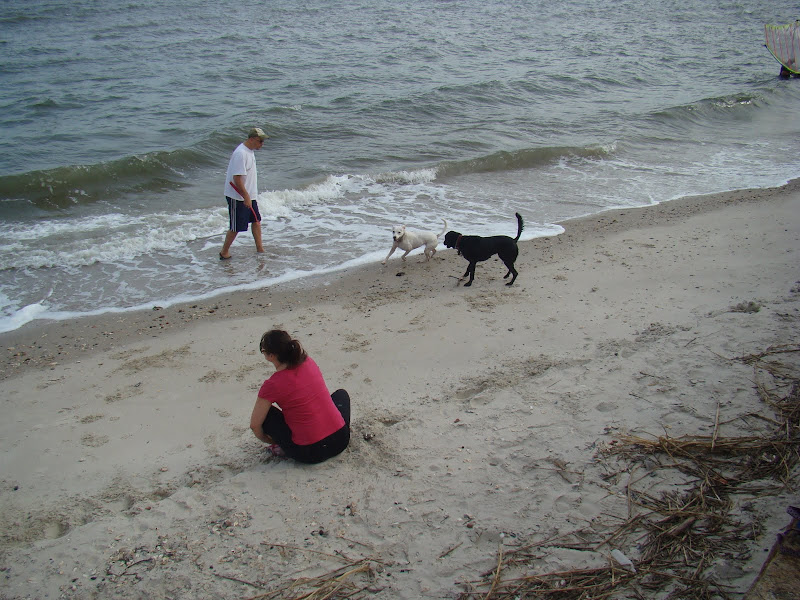 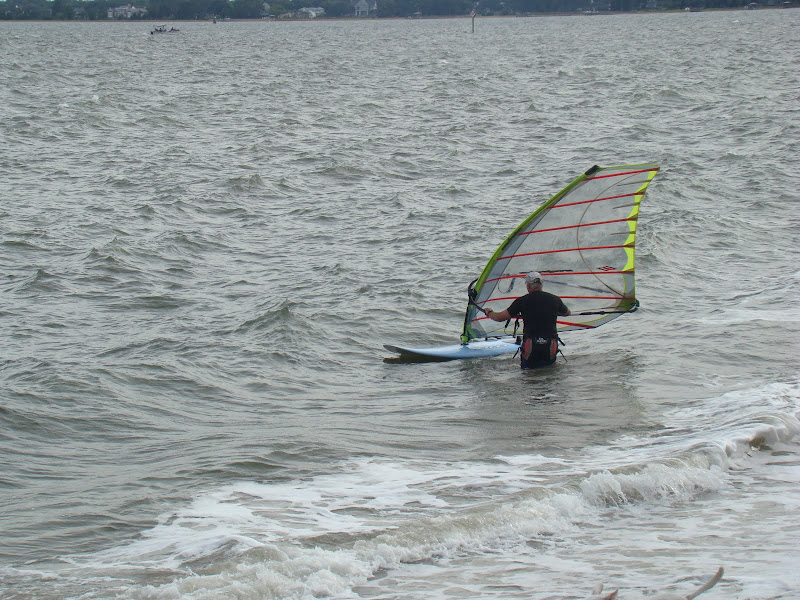 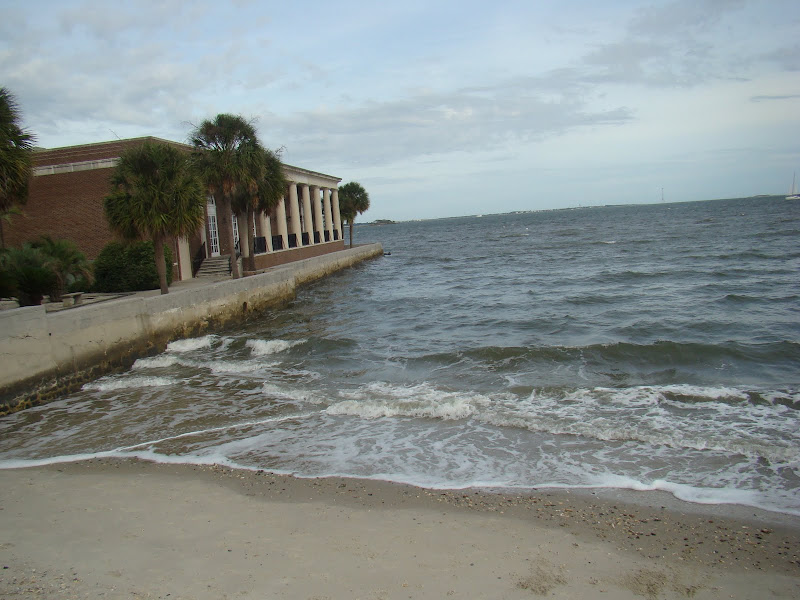 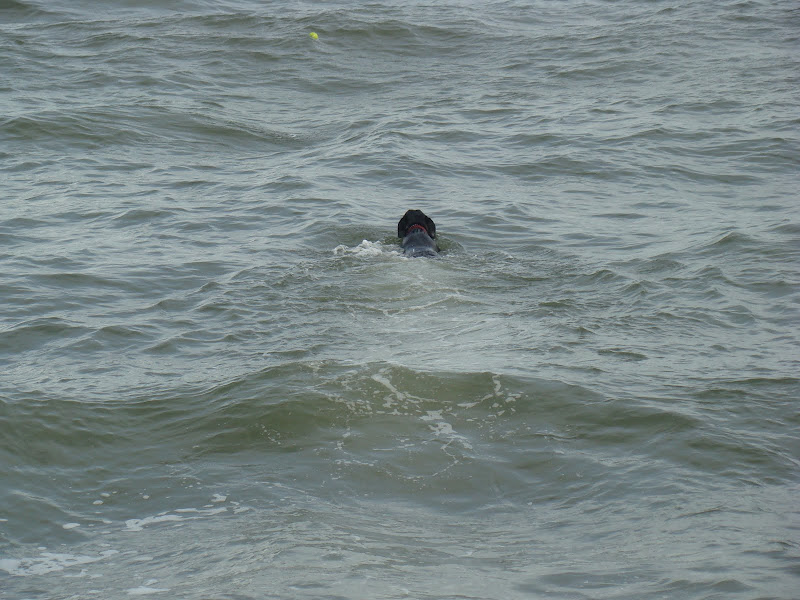 The dog's a much better swimmer than me for sure! 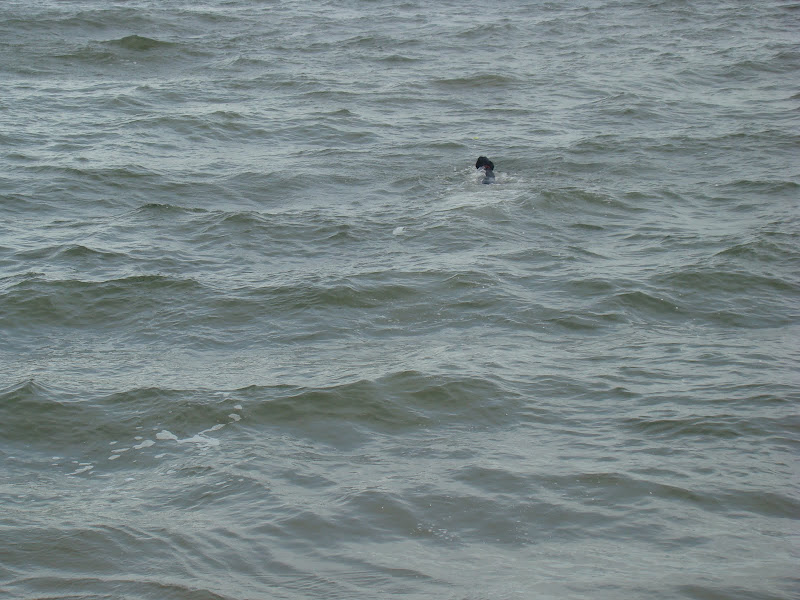 Do you see those multi million dollar houses across the river? 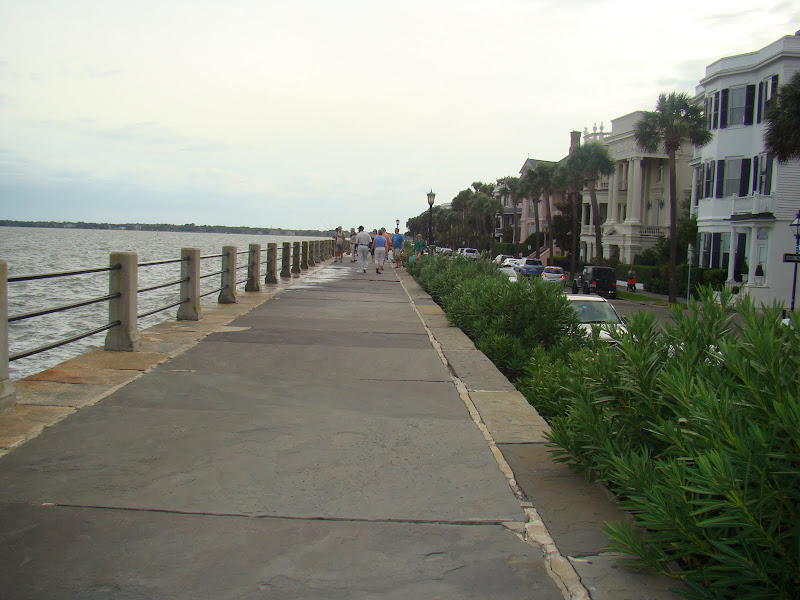 I sure would love to own one of those. Wouldn't you? 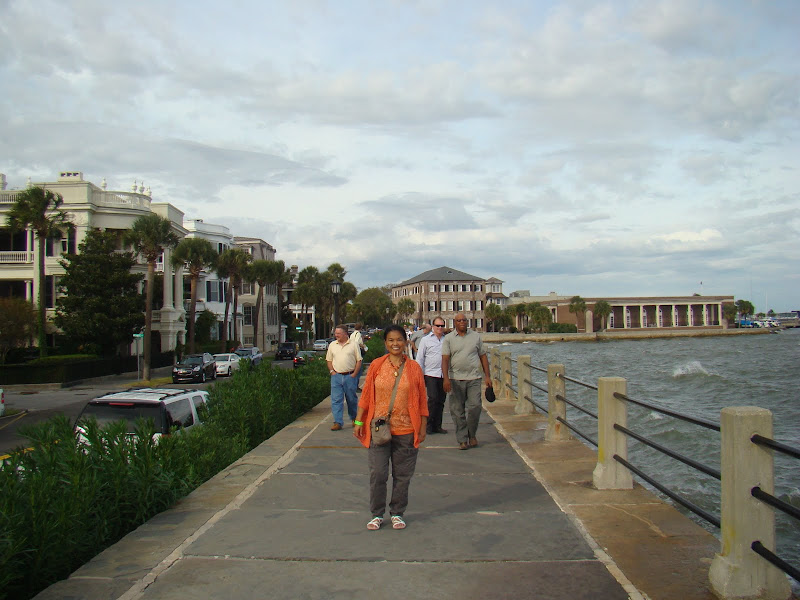 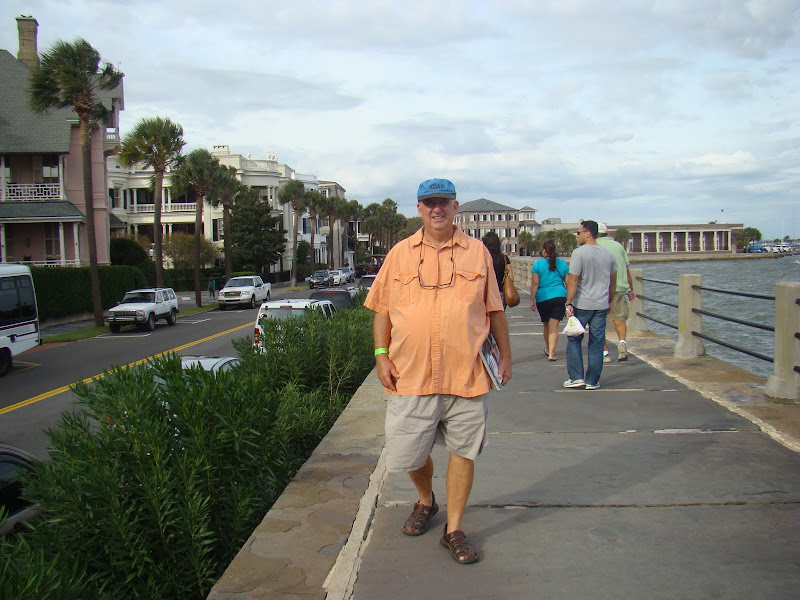 I hope you enjoyed seeing a few pictures of Charleston. I will show you more on Saturday. We had such a good time there that I would like to share as much as I can but I don't want to upload too many pictures so I will post them in segments. The city is so charming and I would love to go back there.

I am linking with Susan's Outdoor Wednesday at http://asoutherndaydreamer.blogspot.com/

and Watery Wednesday at http://waterywednesday.blogspot.com/

Beth's Travels Near and far at http://beyondthegardengate-beth.blogspot.com/

Thanks you all for coming and to our hostesses, a special thanks for all your dedicated work!

What a beautiful city! I would love to visit there too. I'll be looking forward to more pictures.
Candy

Hi Christine, I was walking on that very wall about three wks. ago. We love it there and only live 3 hrs. from there. That would have been funny if we'd been there at the same time.
48 hour Mystery just had a segment on last Sat. about Charleston.
One of the homeowners of those mansions on the waterfront, at the Battery, had a daughter that was killed. So sad!
Glad you had a good, fun trip!
There is so much to see in that town!

One of my favorite all time cities! I have been there so many times, and yet it always enchants me there.

But now, the horse smell in the dead of the summer leaves a bit to be desired. LOL

Thanks for sharing your trip to such a beautiful city.

Oh Christine, I can't believe you were so close my California friend! Welcome to SC! I live about 2.5 hrs away but my son lives on James Island and works in downtown Charleston. I have been to Charleston so many times all throughout my life and never ever grow tired of visiting that very old beautiful city. So glad you had a great time! Your photos are wonderful and I hope to see more!

Charleston is such a pretty city. I love your photos. You two are the cutest couple for sure.. Love your photos of AJ growing up too. Belated happy birthday to her.. xo marlis

Never been there..but I'm so happy to enjoy these beautiful pictures...

I love lthe pictures of you and your hubby....good looking couple!

Great photos and of course I love the dogs!It would be great to live on the water I think.

Been there several times...would go back in a minute. A beautiful charming town. Great pics

A great series of shots!

Hi Christine...What a beautiful place and amazing photo's. Thanks for sharing. ;_)))

You get to go and do a lot of fun things. Very pretty place. Richard from My Old historic House.

Looks like you had a wonderful time. I always think of Rhett Butler when hearing about Charleston!

thanks for joining the Bunny Hop again this week :)

This brings back happy happy memories of Charleston, Christine.

Molly will not go in the water and even gets skittish on the dock!! When she was a puppy she loved to go with J when he fed the fish. This was at our big pond on the farm. She always scampered right along with him and seemed to enjoy, but she will not go in the water...which is unusual for a lab. We think she has memories of those big old catfish coming up out of the water with their mouths open!

Charleston is fabulous Christine. Glad you got to visit and enjoy it. THe weather looked perfect.

A wonderful place to wander by water! Love how there's not too many commercial shops etc right on the water! Delightful homes and all white to keep the landscape light and bright!

What a beautiful place! Those houses are gorgeous.

What a lovely place!!!

How beautiful Chris, I love the walk with the fabulous houses by the river...goodness, they're gorgeous, what a fun trip, hon! I'd ove to go to Charleston someday, after this tour. You look great in orange Chris! Hugs, FABBY

Christine I am so glad you got to visit Charleston!! Its a wonderful city!! I love the boardwalk. I can't talk my hubby into taking a tour of the houses though. Its just not his thing.

I sure you enjoyed lot, What a beautiful city you found for weekend. One of my favorite all time cities! I have been there so many times, and yet it always enchants me there.
Wall Tiles & Floor Tiles

The homes are stunning, Christine! I enjoyed your post very much. You look pretty in orange. John looks good too. So glad you had a good trip!
Blessings, Beth

Christine, I opened the link back up if you would like to link in to Travels Near And Far.
http://beyondthegardengate-beth.blogspot.com/2011/10/travels-near-and-far-3-thymes.html
Have a great week!
Hugs,
Beth

Charleston is such a great place!

There are many places of attractions here which are simply unbelievable to explore. The hotels here are safe and offer luxurious accommodation to all taking Cheap Flights to Dubai.