I have a winner of my giveaway and it is Traci of http://thetracichronicles.blogspot.com/
Congrats, Traci! I already emailed you the gift certificate and instructions
on how to redeem it. 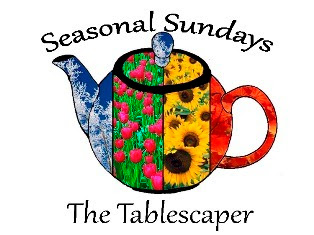 It's Saturday so we get to go on a signtseeing tour today. I am also linking with Beverly's Pink Saturday at http://howsweetthesound.typepad.com/my_weblog/pink-saturday/
and the Tablescaper's Seasonal Sunday at http://thetablescaper.blogspot.com/

Whenever we go to an old town, John and I like to tour old houses. Our trip to Charleston, SC was no diferrent, especially after walking around and seeing the charming houses close to downtown. We decided to take the Church St. Home Tour, where most of the antebellum houses are. I took pictures along the way as we were walking from the hotel and passed by this Powder Magazine building. I thought the cannons in the front are very interesting. We did not want to miss our tour so we did not step in the building. 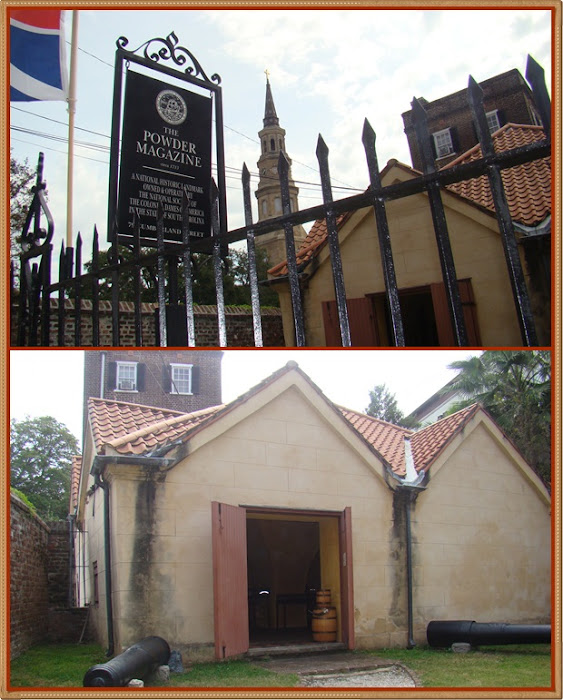 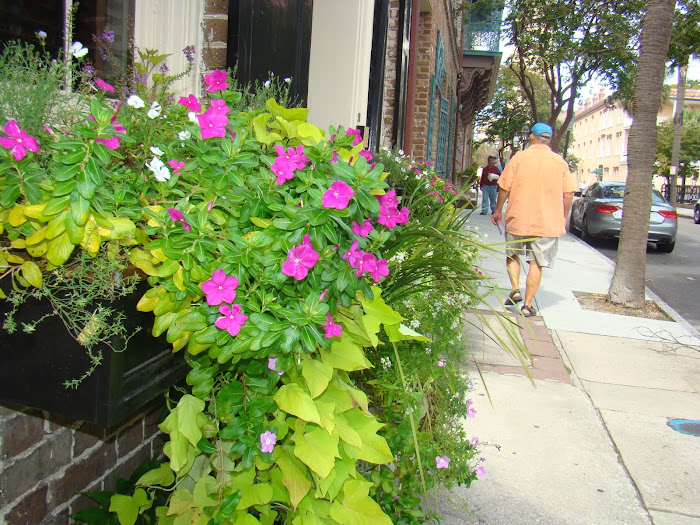 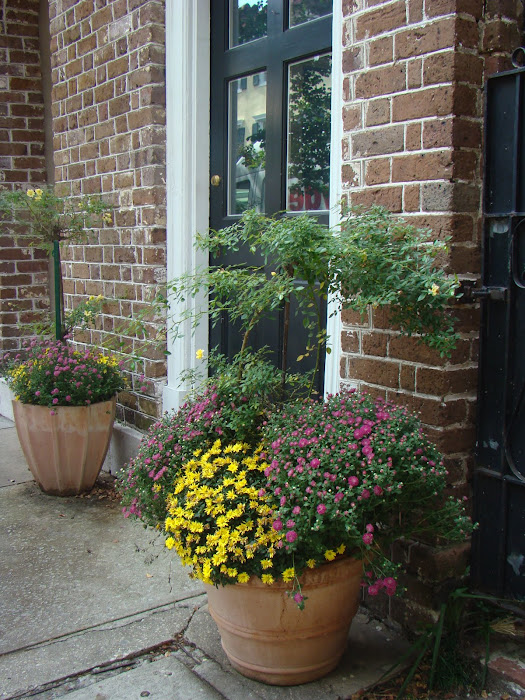 The houses lining Church St. on both sides are so quaint and just so charming! 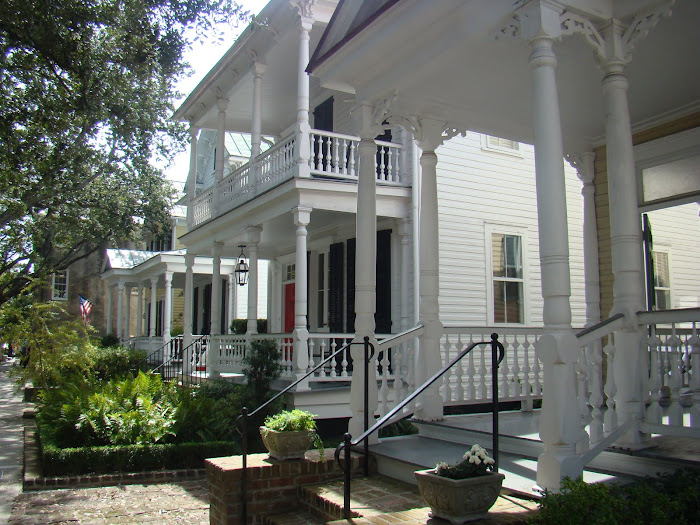 There were horse carriages all over. We wanted to take a tour while in a horse carriage too because I thought it was very reasonable at $22/person but we did not have enough time. We were only there for 3 days and John was in meetings every monring and there was so much to explore and admire. 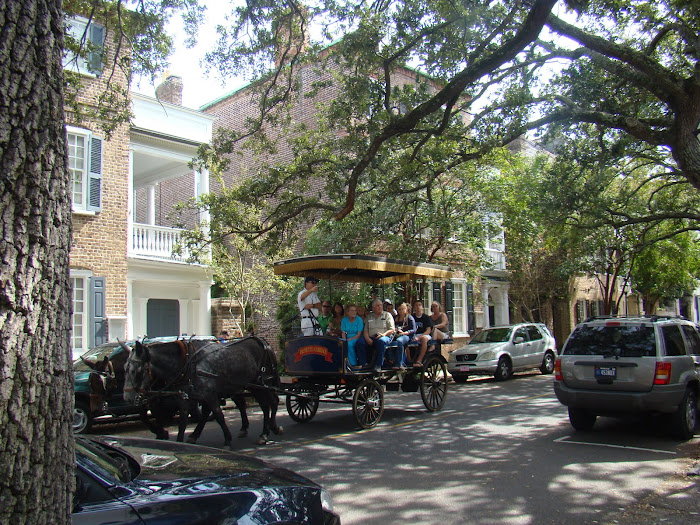 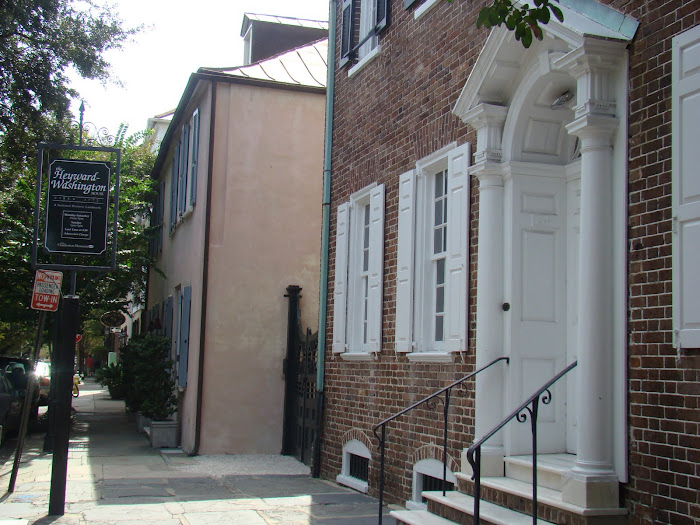 The descendant of the builder of this home, which used to be a tavern, was the one who introduced poinsettas to the US. Again, I am loving the window planter. 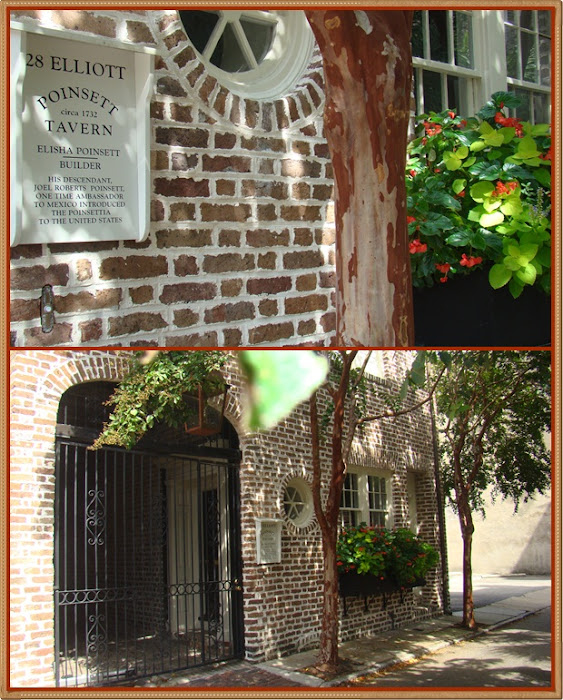 I fell in love with the hanging baskets on the porch, so right after we landed in Baton Rouge airport, we went to a plant nursery nearby to buy some. I stuck a variety of plants and I can't wait for them to fill in. The top photo in the mosaic is a house in Charleston and the 2 bottom ones shows my copy of thier hanging baskets. Just like I said, the plants still need to grow to fill the baskets. 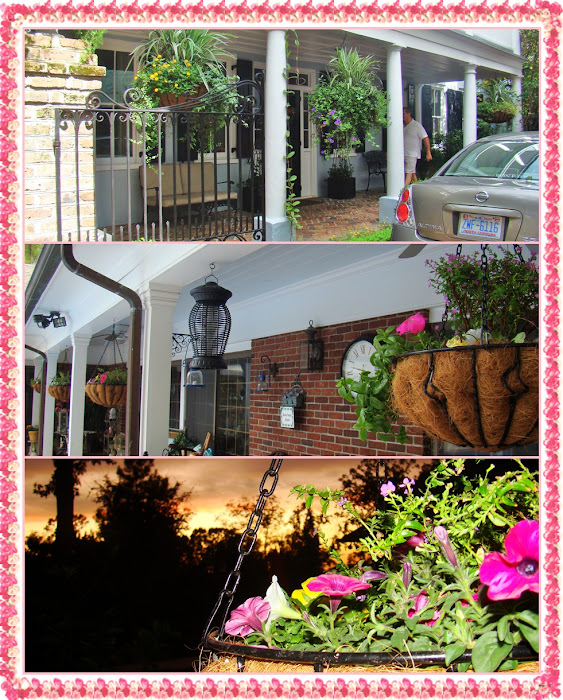 I thought this stone alley was very interesting. 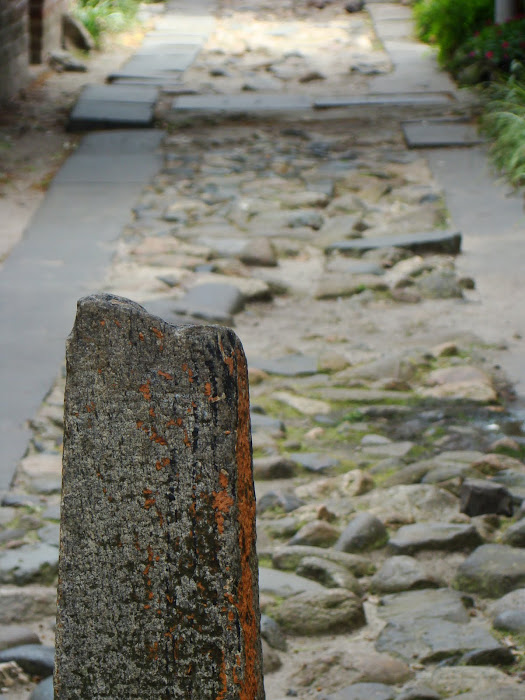 The first house that we toured was Catfish Row. Actually, they did not even tour us inside the house but took us in the backyard with all the pretty fountains. Originally, it was called Cabbage Row. It was where the book titled "Catfish Row" by DuBose Heyward was based, a descendant of one of the signors of the US Declaration of Independence, Thomas Heyward, Jr. The name was changed to Catfish Row from Cabbage Row because of the book. 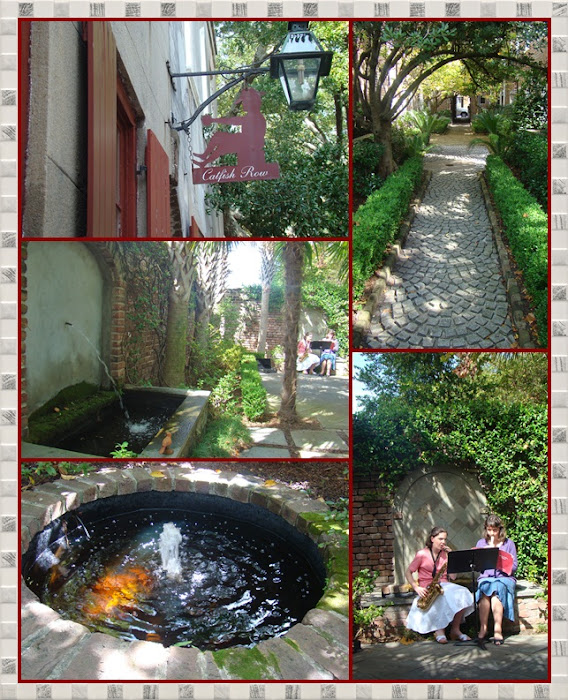 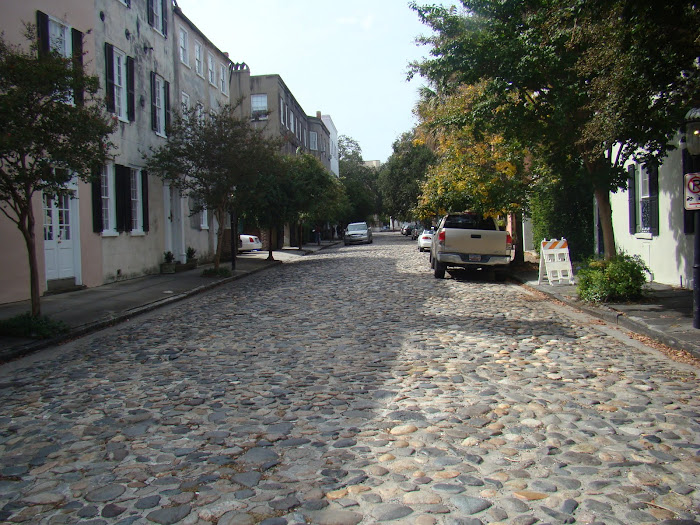 The tour was well organized. There were a lot of people touring but to make it less crowded in each house, we were allowed to choose where to go as long as it is in the list. Tour guides were assigned in every home. This white flag indicates that the house is open for touring. 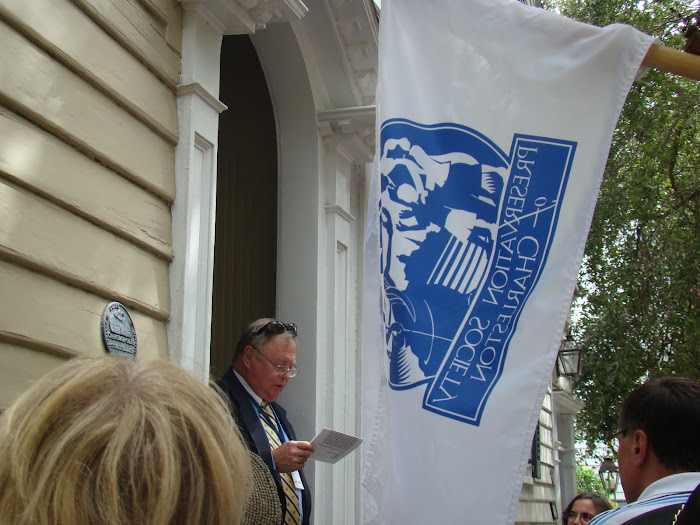 This house was not included in the tour but I took a picture because I love how it looks. I like the gasolier in front of the gate and the triple lion head fountain in front of the house. 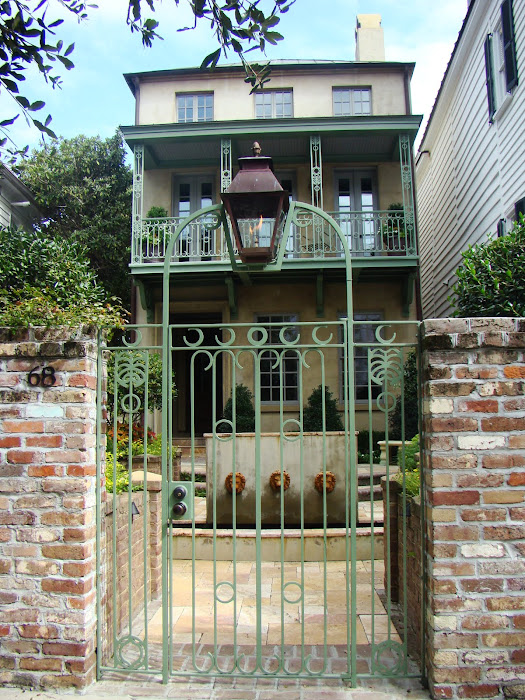 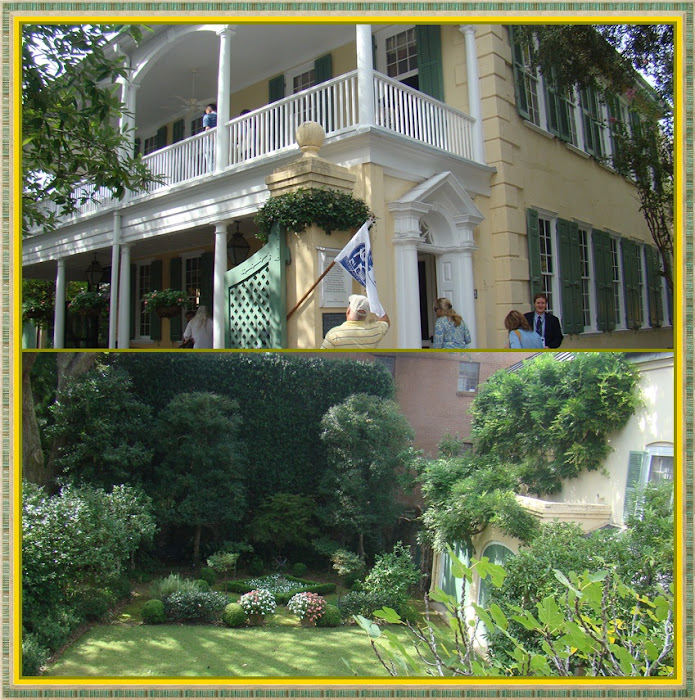 I stood in the middle of Church St. just so you could get a feel of its charm. 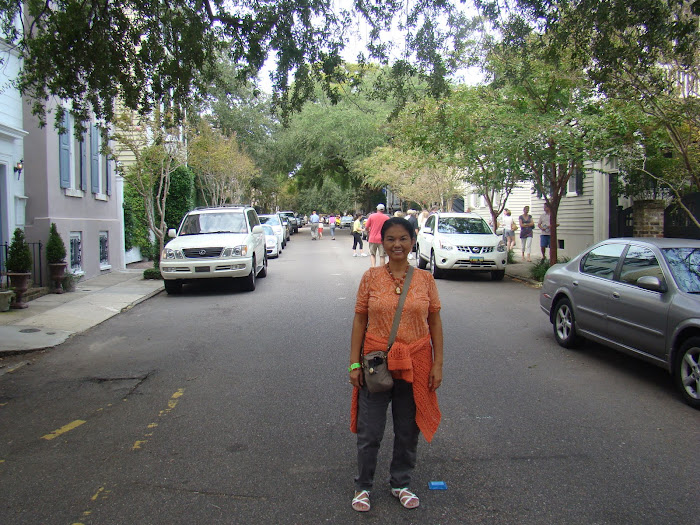 I like the brick pavement at the end of the street. 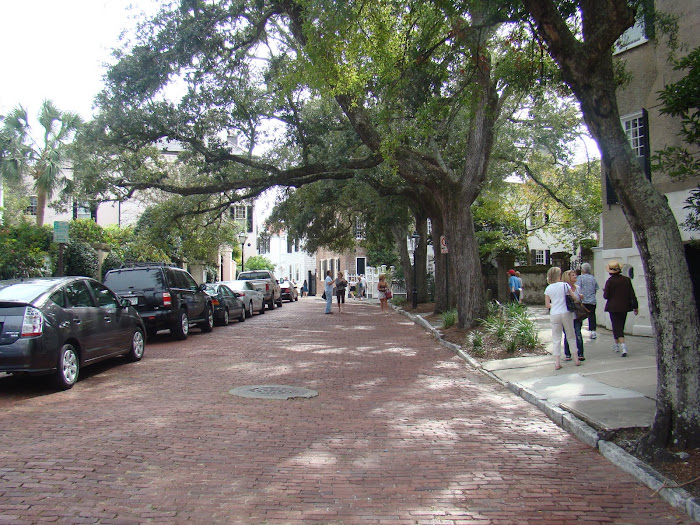 We don't have a lot of pictures together because we don't have a third person to take it and I do not like to disturb and stop other tourists to take it for us, but I found a broken stone post where I could lay the camera and set it on a timer. 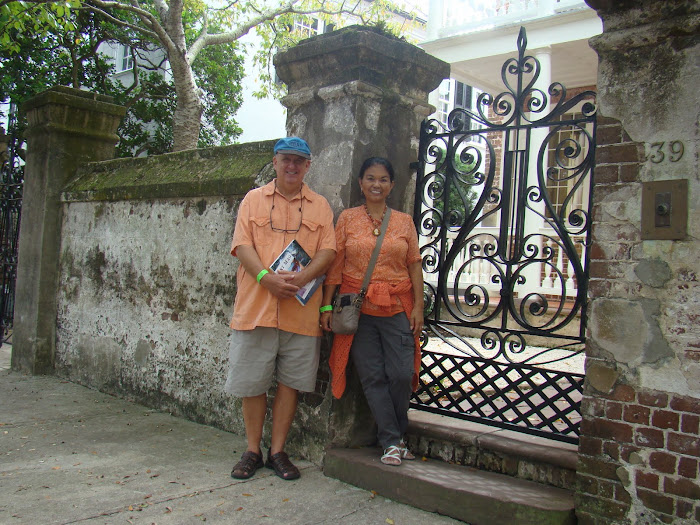 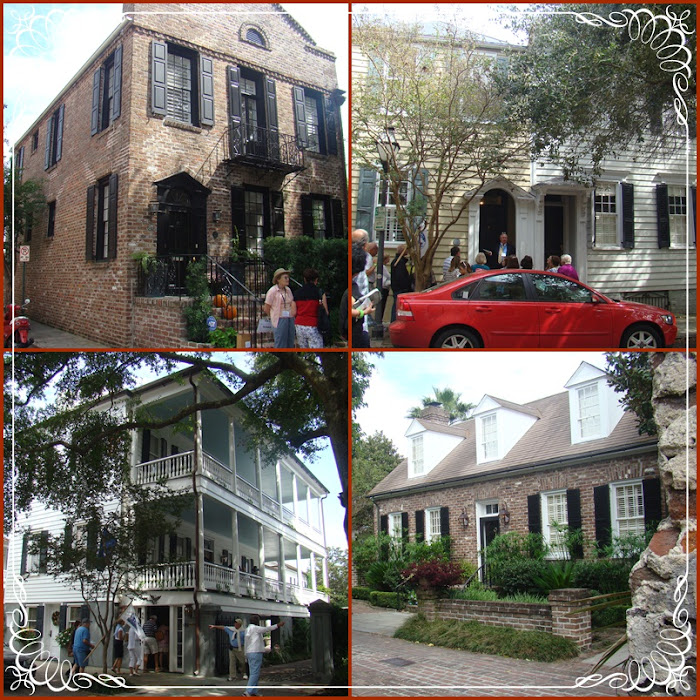 This Verree House was purchased in 1754 by one of the signors of the US Declaration of Independence, Thomas Heyward. Too bad we weren't allowed to take a picture of the garden in the backyard but it was so beautiful. 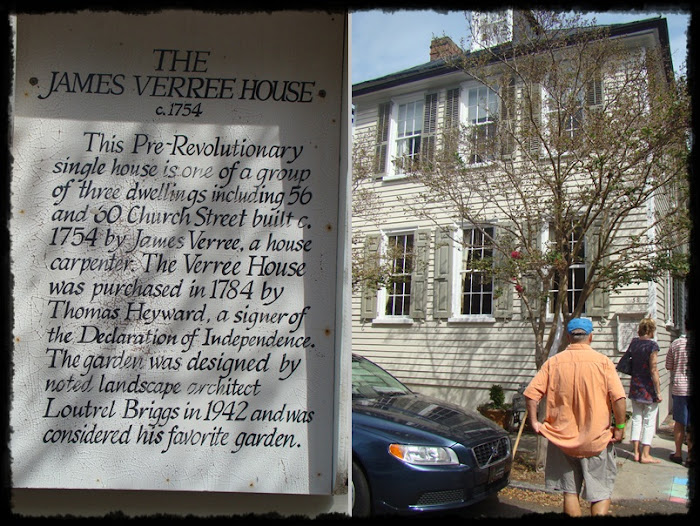 If you are in the market for a historical home, this one's for sale I think for about 3 million dollars. 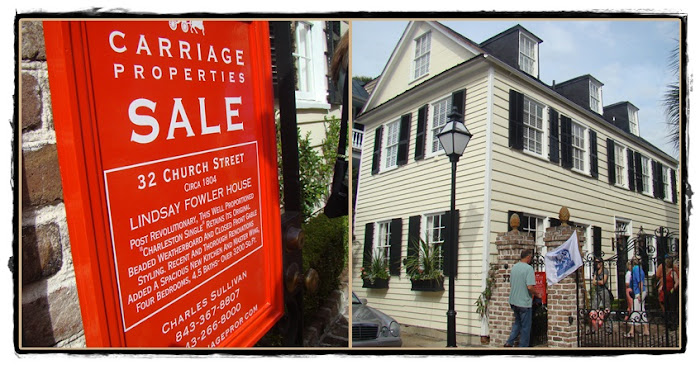 This is the residence of the Sanders. Mr. Sanders is the President of the College of Charleston and his wife Zoe wrote a cookbook and I bought one. Here she is signing it. Don't you just like how the antique car matches the house? 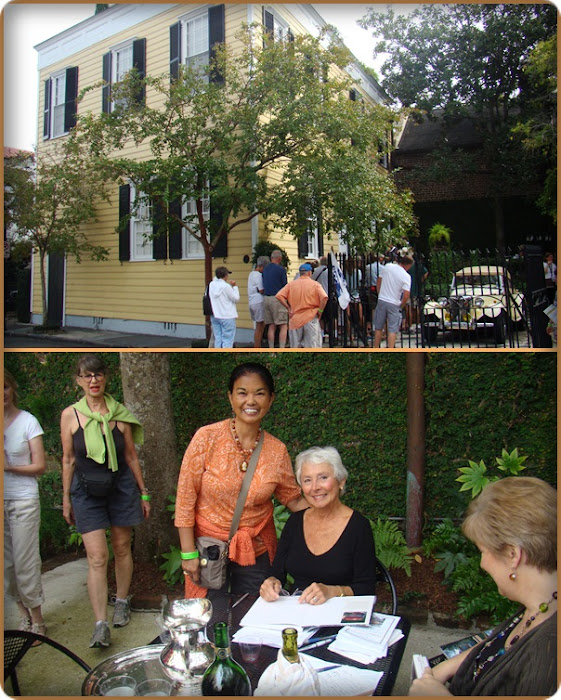 This is the oldest street of Charleston. How do you like that pink house? I do! I like the Italian cypress too. 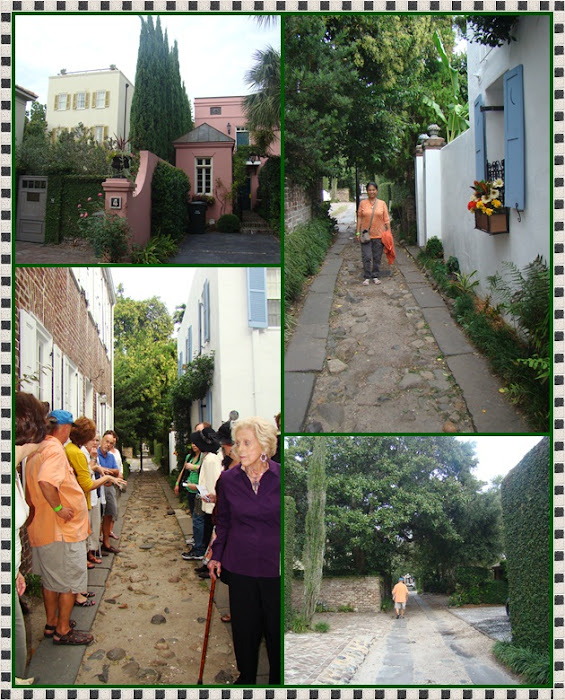 I hope you enjoyed the virtual tour. I have more pictures of Charleston to show you next week so I hope you will come back.
Thank you so much for joining me and to our hostesses, your efforts are always appreciated!
Posted by xinex at 4:00 PM

Christine I've never been to Charleston (Always wanted to go) and what a lovely place it is! I can see that it's just my kinda town *winks* So much history and such beautiful old houses *sighs* I really enjoyed the tour! Thanks for taking us along. Vanna

I have never been here, so it was nice taking the tour through your lens.

Wow! so many houses to choose!

You look so happy with your tour, huh? Found something?

ENjoy your w/end with your lovelies.

you are a wonderful tour guide ! It was good to see a photo of you and your Sweetie.
Happy ps !

Thanks so much for reminding me of our visit there. Beautiful city. Your photos are fabulous!!

I LOVE Charleston! Thanks for taking us on the tour with you! Great picture of you and your hubby! :)

Thanks for sharing - enjoyed the tour. I agree with Vanna - So much history there. I have never been to Charleston (my fault).
Enjoy your weekend.

That looks like a great tour. I do like that pink house. That street is so cool. We did do the ghost tour while we were there,and that was fun. Boy when they get to the old jail and tell the story, it sure creeps you out. Thanks for sharing.

I love this Christine! We are going there in May! Can't wait! Love the pic of you & John! XO

Now that looks like a wonderful day. Everything is so quaint looking. I would love one of those white houses on that street.

We didn't get a chance to do a house tour when we were there so I really appreciate these pictures, Christine!! These homes are just gorgeous and I think I recognize the cobblestone street. Did you realize that you and John are wearing matching clothes?

Christine, Some of these houses reminds me of Bourbon St. in NO. That is a lovely picture of you and John. Noticed the same peach colored outfits, did you guys plan on it or was it an accident?
I attended a gardening class at Armstrong Nursery before and they taught us to buy (depending on how big your planter/hanging baskets are) the 4" or 8" planters and just stuff them together inside the planter boxes and water/fertilize to 'rush' it's growth and within several days, you'll have big plants. Of course, you'll have to separate them later on as the plants tend to overcrowd the baskets! Gardening is a never ending job but it's rewards are awesome flowers! Thanks for taking us along to Charleston. Wishing you well, Nenette West

Hi Christine Sweetie...
Happy Pink Saturday and thank you SO much for taking me on a tour of my birthplace. I haven't been back in a very LONG time, and I always love seeing the rich history. You photographed it so well. I too, love the cobblestone streets.

Momma and Daddy used to take us to Myrtle Beach when we were little, some pics of us there, as young as a few weeks old. What a beautiful city.

Have a glorious weekend sweetie. So happy to take this tour this evening. Many hugs and much love, Sherry

This is such a lovely and peaceful town. I love that pink house too. So cute. :) Thanks for sharing and have a wonderful weekend.

Such beautiful bonding with love ones and friends Christine! Happy weekend!

Beautiful tour!I love history and this is such a fun way to learn it-it makes it more personal.

I've never taken a house tour like that one in Charleston. I would LOVE to go one year.

I loved this informative and beautiful tour. I'd love to go there someday!!

Your pictures are beautiful.....

Thanks for the wonderful tour! I have never been to Charleston. A lovely, historic city! Thanks so much! Happy PS!
R

Thank you for the great tour ..I have never been there.. it looks lovely ....one of our old historcial cities.

I love this tour Christine, Charleston is too beautiful, I'd love to go one day. Love all the beautiful houses they look like some here with those large balconies and the stone paved streets! Great pictures Chris. Have fun honey. FABBY

Another beautiful trip. Thanks for sharing. Richard from My Old Historic House.

What a fantastic tour that was! I would love to visit Charleston, so much history.
Happy Pink Saturday! xo Tami

I love Charleston and it looks like you had a fabulous tour!

Christine,
So much to see and so little time! Thanks for taking us a tour of Church St in Charleston. Makes me want to pack my bags and go to Charleston! History and old homes .. heaven! :D :D Happy Seasonal Sunday!

have been to Charleston. My friend went to the Citadel. He lr wet on to become a Marine General. Long time since I was there. Lovely pics, Christine.

Wow! Christine that is amazing. I felt like I was on tour with you. It is a beautiful place.

You look wonderful! Orange is a really pretty color on you. You look very happy.

Yes, I enjoyed the tour! I love Charleston and have been there a lot, but always enjoy seeing more, especially through someone else's eyes!

I think Charleston is such a beautiful city. We took a day trip into Savannah from Hilton Head a few days ago, but we didn't go as far as Charleston this time. Your pictures brought back memories!

Thanks for the giveaway!! I'm still trying to decide what I want to get with the gift certificate!!

What a wonderful place! I love the homes. It looks like such a charming place.

Doll in the Looking Glass said...

Historic locations are simply the best places to visit. Great photos that really capture the charm of Charleston!

Lovely photos! It looks like you had a wonderful time! I've visited Charleston twice and would love to go back again sometime. It was fun to see your photos. They remind me why I love Charleston so much! Thanks for the tour! ~ Mary