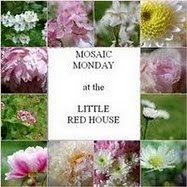 Well, I am still in Florida but I took a weekend break from babysitting my 2 precious grand babies to join hubby in Tampa for the weekend. He had a medical seminar to attend. I drove and picked up my granddaughter so she can spend sometime with us too at Ybor City. We also watched the broadway, Wicked. AJ and I have seen it for the 4th time. Do you think we really like it? LOL! I will show you more pictures for Sightseeing Sat.

For now, I just want to share with you the blue waters of Florida, although the first mosaic looks more like gray water, the sky is definitely blue. These pics were taken on the Cape Coral bridge which connects Fort Myers to Cape Coral.
The presence of palm trees and water is so typical of Florida. 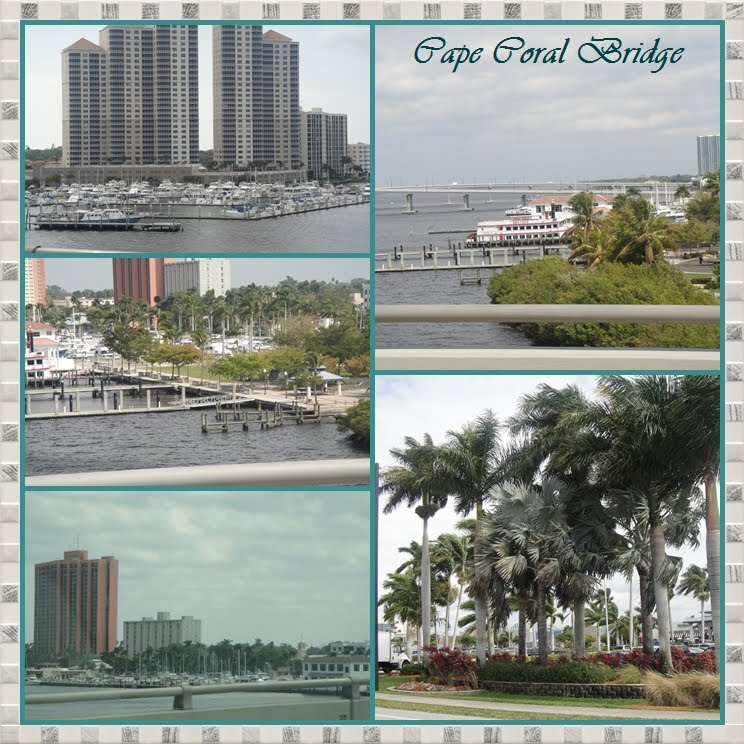 Although this is the new Sunshine Skyway bridge, it still freaks me out but I drove pass it just to take pictures to share with you. It is a beautiful bridge but the original bridge has been a site for many tragic accidents.
In Jan, 1980, USCGC Blackthorn and a tanker, Capricorn collided resulting in the drowning deaths of 23 crew trapped on board and belowdecks. And then again in May, 1980, the southbound span of the original bridge was destoyed when the freighter MV Summit Venture collided with a pier support column during a storm. 1200 feet of the bridge plummeted into the Tampa Bay. Six automobiles and a Greyhound bus happened to be driving by, not knowing the bridge has been split and they fell 150 ft. below killing 35 people. This bridge is very tall and it is really hard to see what you are approaching. There was 1 survivor, Wesley McIntire. His pickup truck landed on the Venture but he died in 1989. He was haunted by the fact that he was the only one who survived. 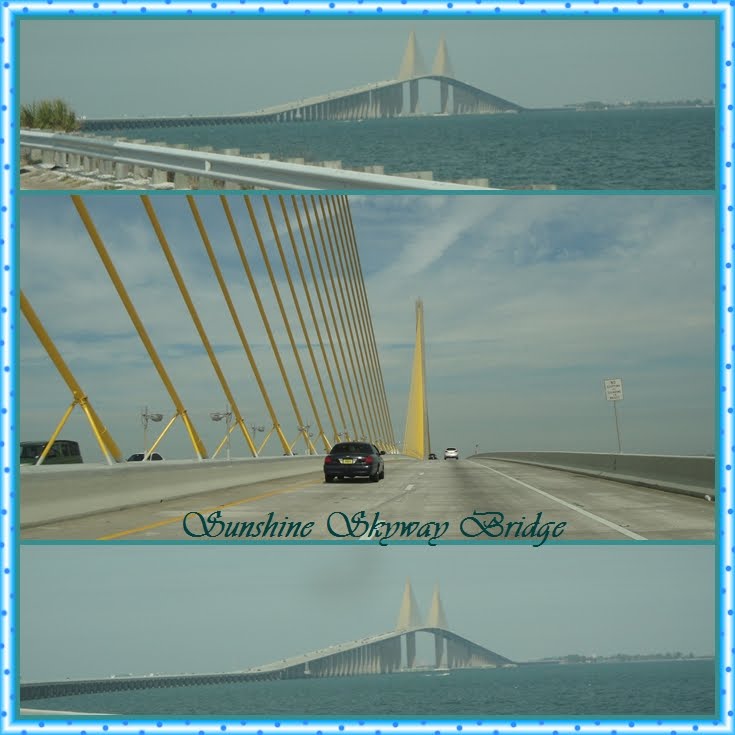 The Courtney Campbell Causeway on SR 60 is a different story. I love driving by there, very picturesque with water on both sides. It has 2 beaches along the way. It stretches 9.9 miles connecting eastern Clearwater to Tampa's Rocky Point Island and subsequently to the western portion of mainland Tampa. 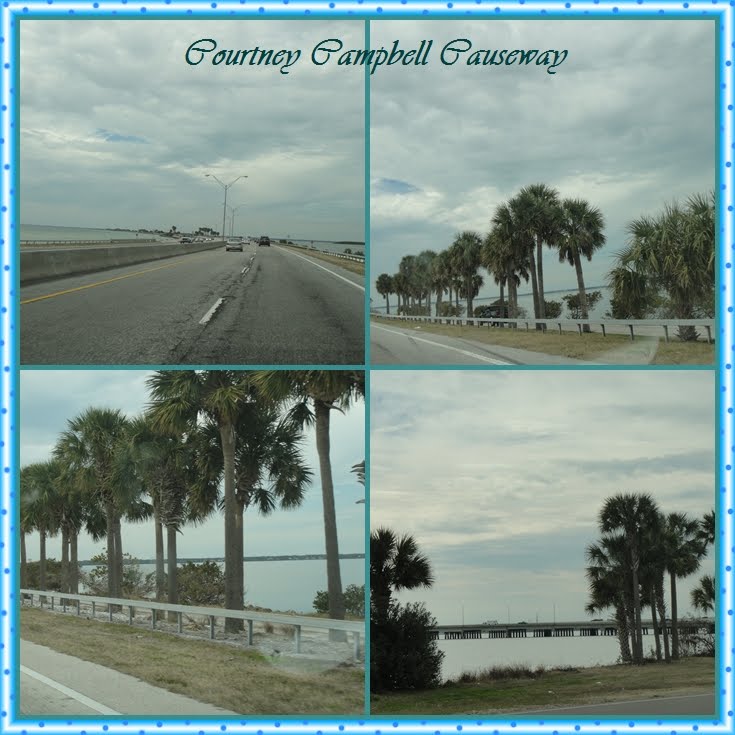 I hope you enjoyed a little tour of some FL waterways and bridges. These are just a few of the many bridges in Florida. Thank you very much for your visit and many thanks to our hosts!
Posted by xinex at 11:16 PM

How beautiful! I could definitely use me some Florida, sunshine and palm trees.

I enjoyed traveling the highways of Florida with you. Really pretty part of the country.

That is a strange looking bridge girl...Loved seeing all your pictures my friend...hey congrats on the new grand baby...Hope your having a great time..Hugs and smiles Gl♥ria

What a nice break for you and John! I love blue skies and palm trees. Happy Blue Monday.

Christine you take amazing pics, you must always have your camera with you!!~ I miss Palm Trees!!~ Happy Monday! And have fun with those grandbabies!!~

Great pics Christine. I have been to Fort Myers. My grandparents lived in Port Charlotte before they passed away. Enjoy those grandbabies.

Christine, These are poignant stories and gorgeous pictures - thanks for taking me to Florida for a little break from a midwestern winter!

thanks for the nice tour Christine :) lovely photos!

u may view mine here

thanks Christine for bringing Fla to me in this very snowey day...have a great vacation.

These sre allbeautiful places Christine. Thanks for sharing.

This is wonderful Christine. I enjoyed all the photos and your mosaic is beautiful.

Christine, these pictures are all just gorgeous. I love them. What a great time. Hugs, Marty

Loved seeing your photos. I really have problems crossing bridges like that and the older I get the worse I get.

That was so informative and I so enjoyed this sharing post with gorgeous photos too! Even though I live in Palm Beach Florida - I've never ventured to the Tampa area. I do go over to Naples and as far up I75 to Ft. Myers - but no further!
I feel now that I'll need to explore more of this state. Thank you so much!

Ybor City...did you eat at Columbia? The Sunshine bridge freaks me out too. I ride over it (my parents live on Siesta Key) but I never like it. It is beautiful to see...but a scary trip over it!

What a beautiful place to be driving!

Great mosaics of nice scenery.
I would love to be in some nice weather like that. Happy Blue Monday!

Those bridges are all amazing. Wish our weather looked like that right now.

My family is in Palm Harbor. We fly into Tampa. I haven't been on the newer bridge but I know that it scares my brother-in-law, my sister has to drive him over when he has appointments to call on. I remember that terrible accident.
The causeway I have been on. Actually we were in a VERY close call accident back in the 80's on that causeway. The road wasn't divided like it is now with the cememnt blocks. I hope to visit them in May/June for great nieces who will be graduating from 8th grade.

That was a nice trip to Florida for me! Enjoyed it. We have a bridge that is tall (Corpus Christi). They are weird and scary when they're that big. Thanks. Jenn <><

Beautiful photos Christine! That bridge looks so scary! After reading the stories you told about it, I'm not sure I'd want to get on that bridge either. laurie

Really pretty part of the country.

I am so afraid of bridges! I am scared just looking at that one! Joan

Oh how wonderful to see blue skies and palm trees! Thanks for sharing at MM. :)