Last Chapter of the Oasis 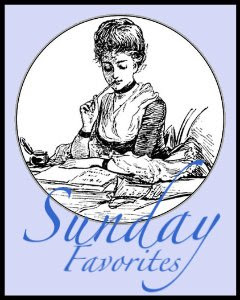 I originally posted this at the end of 2009. I would like to thank Chari of http://happytodesign.blogspot.com/ for the opportunity to show it again because it was an awesome trip, probably my best cruise experience ever! If you ever consider going on a cruise, I recommend taking Royal Caribbean's Oasis of the Seas. It's truly awesome and there are so many things to do in the ship, you wouldn't want to leave it. 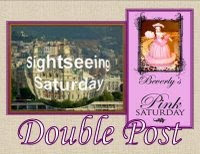 For Pink Saturday, I want to show you the Rising bar inside Royal Caribbean's Oasis of the Seas. ship. The first pictures shows the bar high up there so you can see a big gap between the ground and the bottom of the bar. The second picture shows the bar midway. Can you spot all those pink neon lights? The water is coming from its bottom. The last picture shows it down where AJ can even reach to touch it. Isn't that pretty amazing?
So, here comes the rerun! I hope you enjoy it, especially if you have not seen it before. 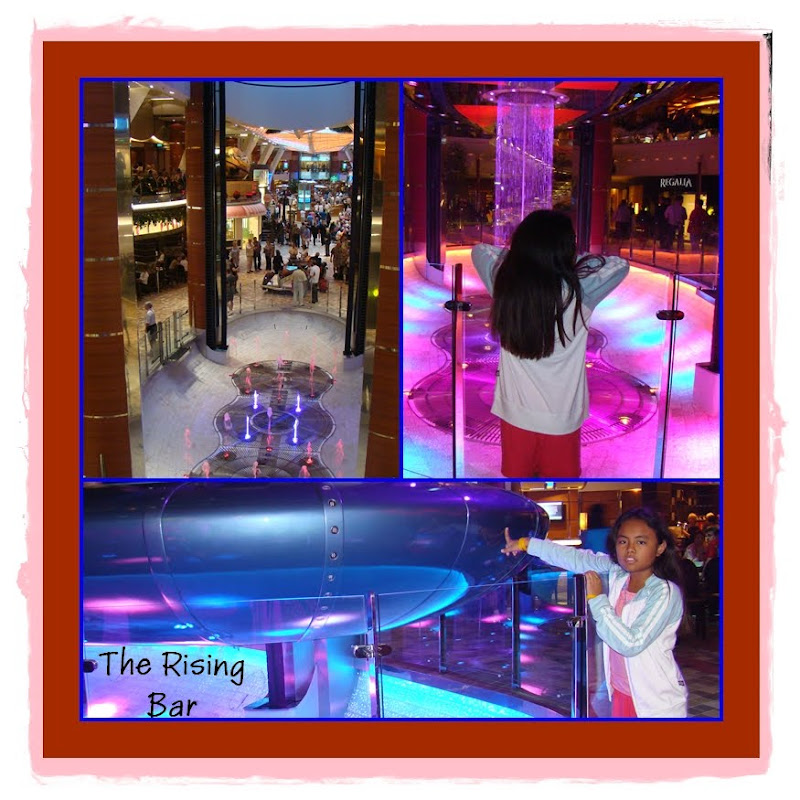 This will be my last post about our trip on the Oasis of the Seas showing you the features of the amazing ship. 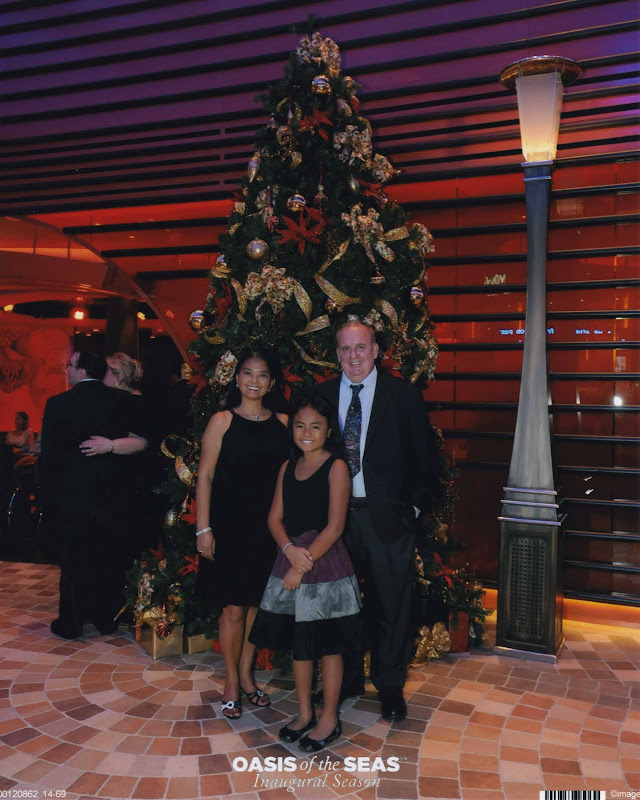 AJ had a chance to boogie board. She is under 57 inches tall so she was not allowed to surf.
Cany ou see the Atlantis in the background? Yep! We were in the Bahamas when we took her up on the deck for the experience. It rained so we decided not to go out of the ship. We have been to the Bahamas at least 6 times already anyway. 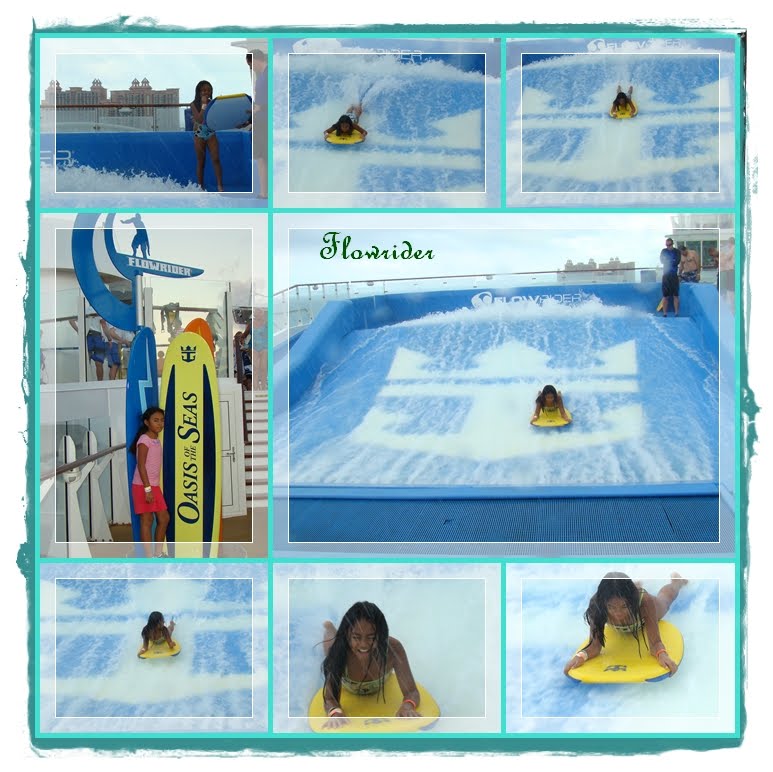 These are just pictures we had the porofessional ship photographer take of AJ. We thought the back drop being simple would make nice pictures. She is just growing so fast and we better capture every moment. Another experience AJ enjoyed was going on the zip line. I was nervous about her going that I had to call her mom for permission if it was ok to let her go. And her mom said "No problem, she has done it before!". My sister who just turned 72 while we were cruising also went for it. Not me, though. I am a chicken!

Do you see the middle picture where it says "Oasis of the Seas"? Do you see the guy hanging on the rope in front of it? That's where they zipped. They went diagonally from one end to the other end, just hanging on that rope. Do you see how high it is with no safety net beneath? That's the reason I wouldn't go. 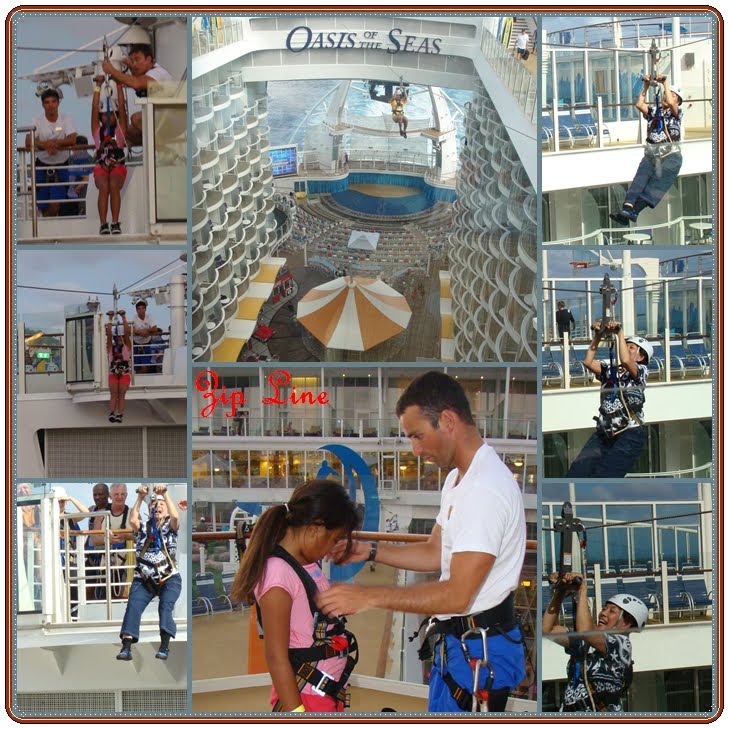 The entertainment was excellent. The shows were spectacular. Here are a few pictures of Hairspray, which was a broadway show shown while we were sailing. The Nelsons also had a phenomenal performance. There is another picture of them below. You will see the bagpiper going all around the deck. 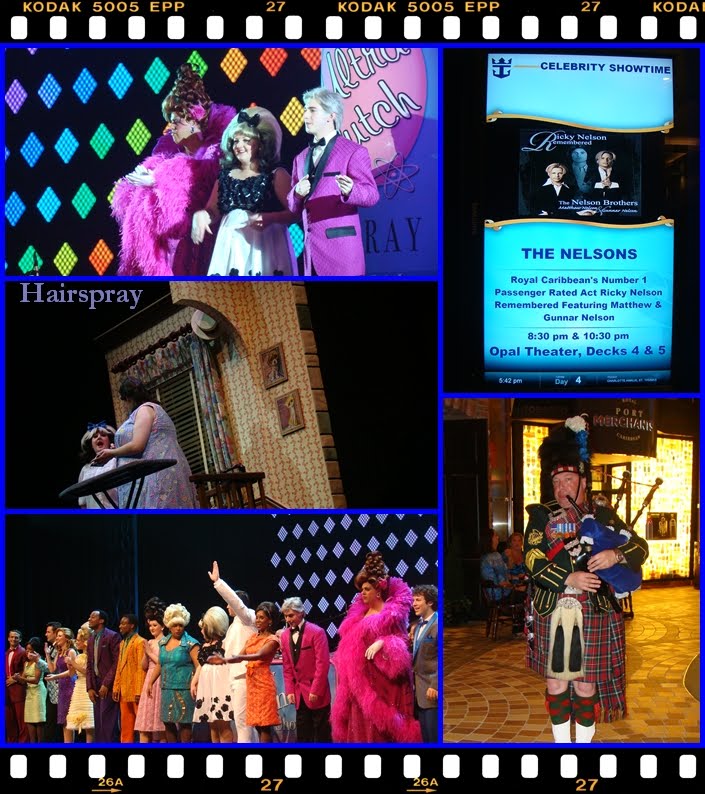 So much to do, so much to see! Honestly, you wouldn't even have to go out of the ship even when the destinations were reached. AJ never went out of the ship. She stayed with the Voyagers, a 9-11 kids group, in the kids center. The counselors did so many activities with them such as playing games, dancing, adventure science experiments and many more.

There was a mardi gras parade, an ice skating show portraying a tribute to Michael Jackson. The Nelsons sang their dad's songs as a tribute to Ricky Nelson. I thought this cruise was planned just for me. What are the chances of a cruise having a peacock bench on the carousel? They must have known I love peacocks, LOL! And what are the chances of the Nelsons performing there with their dad's music? In case you do not know yet, although I have said it repeatedly, that I am Ricky Nelson's (may he rest in peace) #1 fan. Another thing was that they showed Ozzie and Harriet on TV and more tributes to Rick 24 hrs a day on 1 TV channel. So, I was entertained in the cabin too.

We all enjoyed the 70's disco. 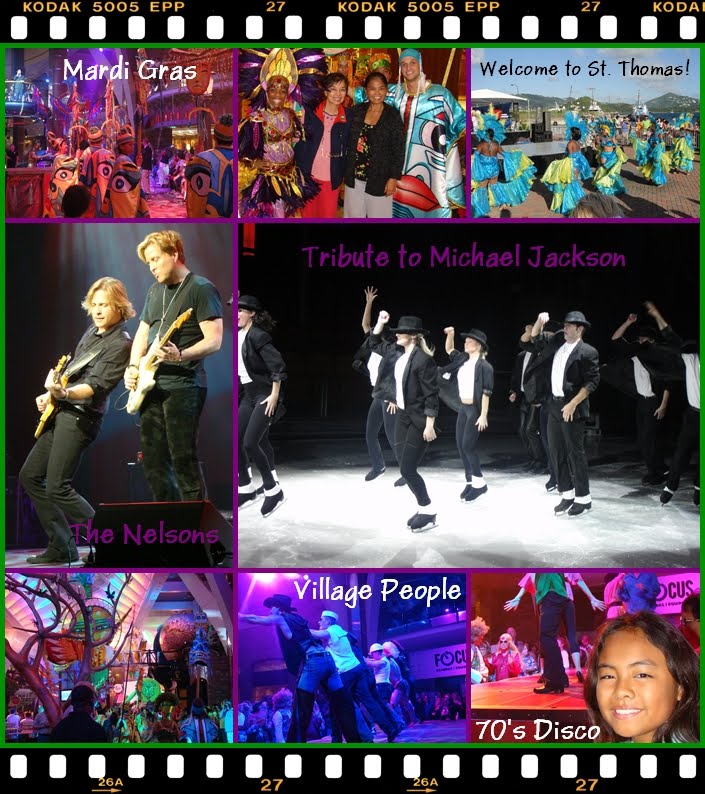 The shows alone would have made it worth being on the ship but it wasn't enough. They spoiled us with unlimited scrumptious food too. Here are a few samples. And kids were not the only ones with activities. They had activities for adults also. My sister and I went to a jewelry making class. Best of all, they give you the supplies for free. Because of that, I dragged John to a Scrapbooking class because I wanted to get 2 sets of scrapbooking supplies. LOL! And although he was the only guy there, he agreed just to make me happy. Isn't he nice? 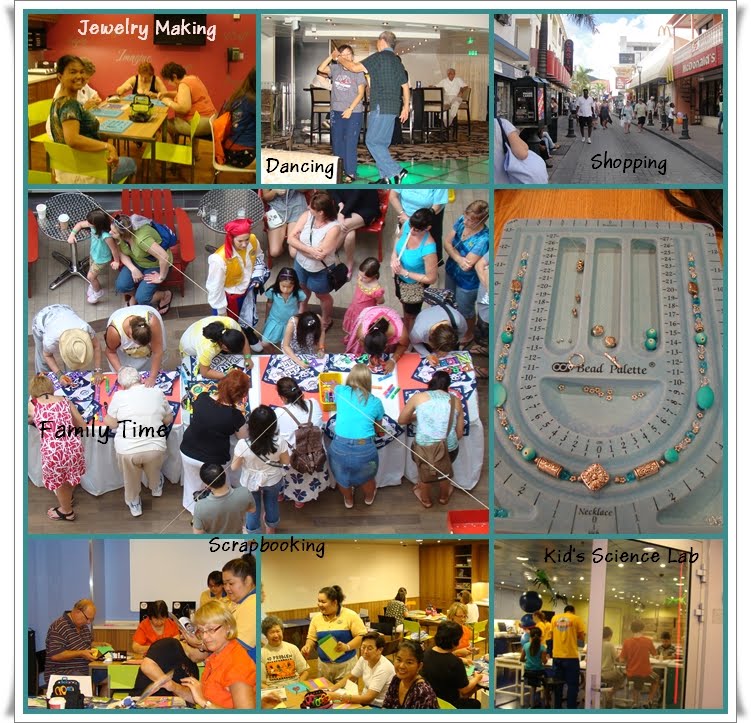 My sister and I had a good time shopping in St. Maarten and St. Thomas. I asked the guy in stilts if I could take a picture with him and he went on top of me, LOL! I thought that was so funny. 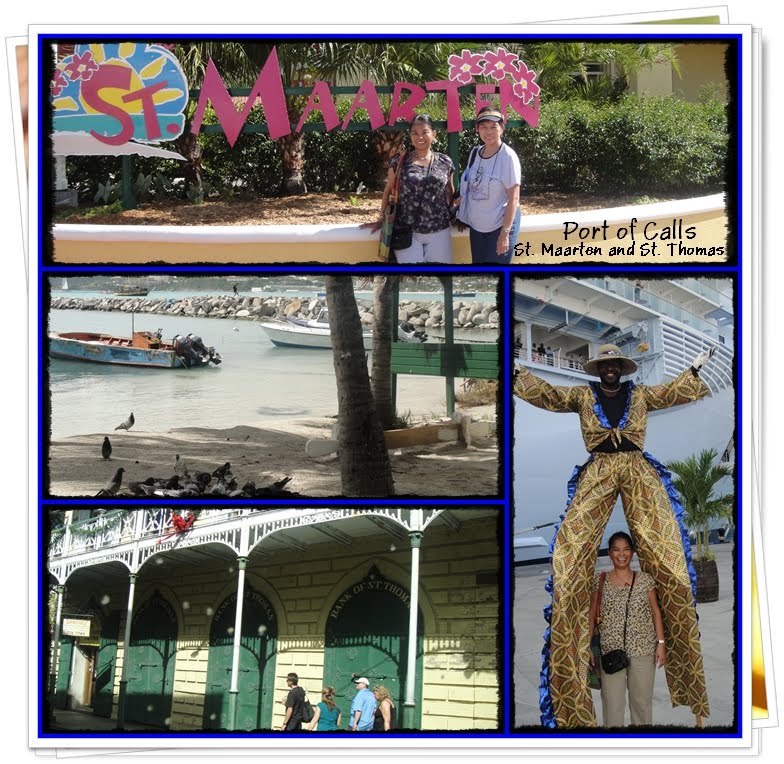 The night before we left the ship, I saw this in the cabin. John had it delivered for me. Sweet huh! But I was mad because I could not take it home. What a waste. Plants, flowers and fruits are not allowed to enter US from another country. I hope the next cabin occupant got to enjoy it. I wonder if the steward threw it away though! Shucks! 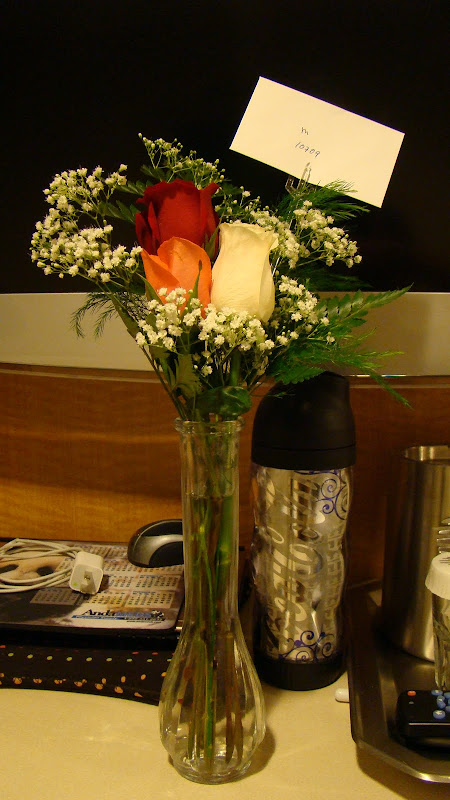 Well, I hope you enjoyed cruising with us cause I certainly enjoyed taking you all.
Thanks to Beverly for hosting Pink Saturday!
Posted by xinex at 8:00 PM

Wow, Christine. I know you all had a fabulous time. Love that little black dress you are wearing in one of the pics. AJ is adorable, too. What a fantastic ship!

Looks like you all had a wonderful time. That is a beautiful ship! Beautiful photos! Happy New Year!

It looks like you made so many wonderful memories on this trip. It must have been a once in a lifetime experience, how lucky for AJ that she got to go with you. That kid gets to go to the neatest places!

Happy New Year Christine, I hope 2010 is full of all good things for you!

This really looks like the trip of a lifetime. How fun. I've never been on a cruise. I wasn't sure I wanted to go on one. I love the water, but I like being able to control things...how long I stay in a certain place, etc. Your pictures and information have really changed my opinion!

WHat a wonderful experience you had! And an adventure too! You so should have done that zip line!

Great mosaics of your trip!
I'm having a New Year Give away, stop by if you get a chance!
~Here's to a wonderful New Year~
~Really Rainey~

What a sweet hubby you have there. The zip line looks fun. And so does the water slide. AJ is such a beautiful young lady. Thank you for sharing. Rosie

Christine, this looks like an absolute blast, and yes, that John is a sweetheart, just like his wife is! Both of your are precious! :-)

Happy New Year to you. I hope this is an extra special year, and that 2010 will be one that is filled with blessings for you and those you love.

Happy Pink Saturday Christine!
A wonderful New Year to all!
All the Best!

Michelle, All Home and Love said...

Wonderful pictures! Looks like such a great time, you have me wanting to take the same trip!
The flowers are pretty, it's great you took a pic of them before you left. Happy New Year!
~Michelle

Ooooh la la!! I love that rising bar. Looks like your family had a wonderful time.

I have never been on a cruise but your post is making me want to sign up now!! What a lot of fun things to do and see. I can understand why you wouldn't need to leave the ship. I'm with you, no zip-lining for me - scary!! AJ is brave!
Happy New Year!
DD

That bar is fantastic! Yike your husband was the only man attending the scrapbooking class. He's a keeper.
Joyce, IL, USA

I know you had so much fun. I know I would have..thank you for showing us the pictures. Happy New Year and Happy Pink Saturday..

What a great trip! Looks like so much fun!
Happy 2010, Christine!

Looks like a great time. I am with you on miles redd... I had the hardest time picking any pictures at all.

What a fabulous post, I felt as if I was there too. Your pix are great. they make super mosaics too.
What a lovely hubby you have, so romantic to give you flowers at the end of your cruise.
Maggie.

What a fabulous post, I felt as if I was there too. Your pix are great. they make super mosaics too.
What a lovely hubby you have, so romantic to give you flowers at the end of your cruise.
Maggie.

THIS IS JUST SO MUCH FUN, SO FABULOUS BEYOND! I FELT AS IF I WERE TRANSPORTED THERE!

THANKS FOR SHARING THESE WONDERFUL PICTURES WITH ALL OF US TODAY!

CHEERS AND HUGS FROM WANDA LEE

Chari at Happy To Design said...

My friend, I wanted to come by and check on you...was just hearing on the weather news about all the bad storms and tornados that passed through Mississippi today...I said a prayer, dear friend...and do hope that all is well with ya'll!!!

I'll check back with you in the morning!

Wonderful pictures, Christine!! Looks like you all are having such a grand time.

Chari at Happy To Design said...

Hmmm...I haven't heard back from you so I'm hoping and praying that everything is okay at your place, Darlin'! I do worry after hearing about all those bad storms that went through Mississippi yesterday!

Girlfriend, I just can't imagine a more fun vacation then to take a cruise on the Oasis of the Sea! It is simply fabulous!!! They just have sooo many things to see and do, I'm sure that one could stay busy for an extended period of time! Fabulous!!! This was a great post to share for Sunday Favorites this week...thank you, Christine!

Also wanted to thank you for your sweet note and well wishes for Sunday Favorites "One Year" birthday celebration! I really am having so much fun with this little party!!!

Have a super Sunday and best wishes with the gift card giveaway!

Love ya,
Chari
PS...please let me know how ya'll are doing!

Oh my gosh....I don't think I've ever seen a more magical trip! How wonderful.... I wish I were there.

Hi Christine! I missed visiting your blog but now that we've moved to a house and I got a job, I barely have time for anything. I'm sure you know how that is.

Lovely cruise you took and the pics are amazing!

AJ is adorable!!! How's the new grandbaby? I'll have a new nephew in July. My 4th older brother's, who live in Canada with his wife.