Our Little Princess Has Grown and She's Here, Yay!

Our granddaughter was scheduled to arrive at New Orleans airport, to spend her Spring break here with us. It is the only one at drivable distance from us with a direct flight from Tampa but it's still a 3 hour drive from where we live. So, we decided to stay overnight in a hotel close to the airport the night before, since her flight arrival is scheduled early.
We were not in the French Quarters so it is a different site from what you normally see of New Orleans. We drove around and these are sites that we passed by. This is the Treasure Chest casino. 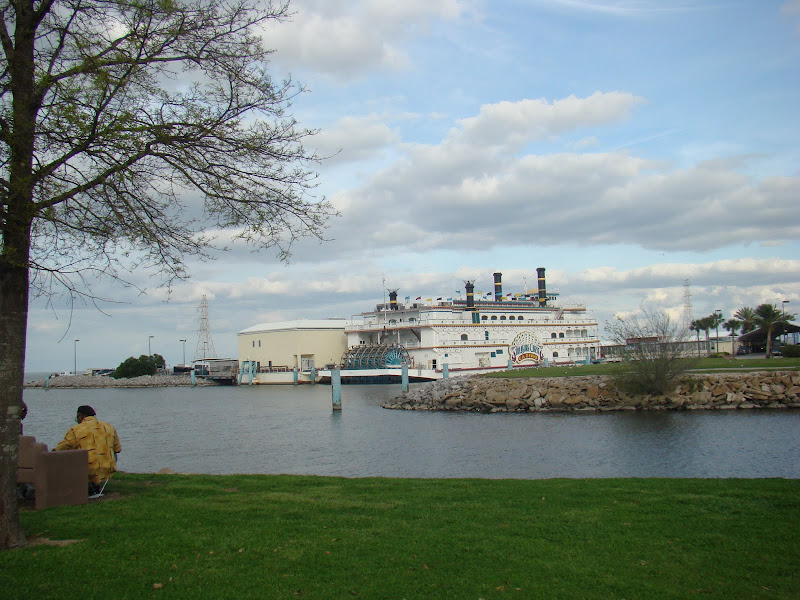 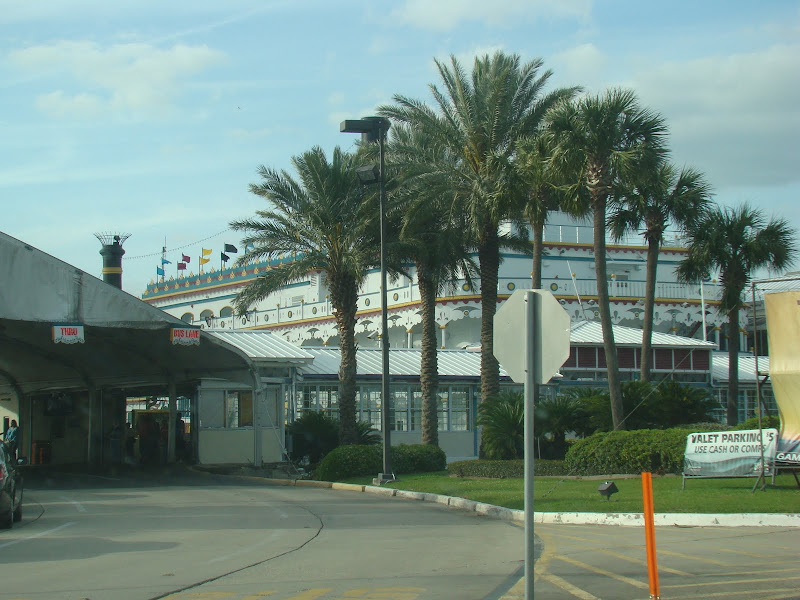 There is a park right next to it. 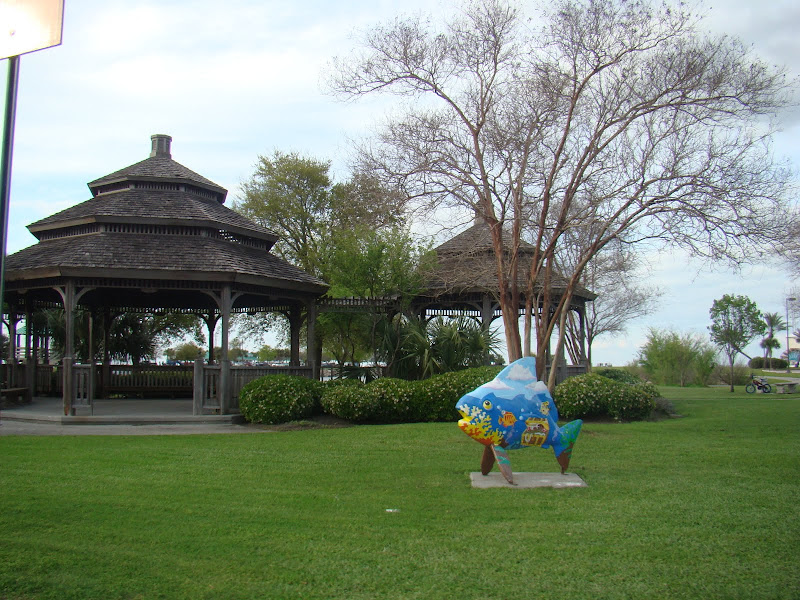 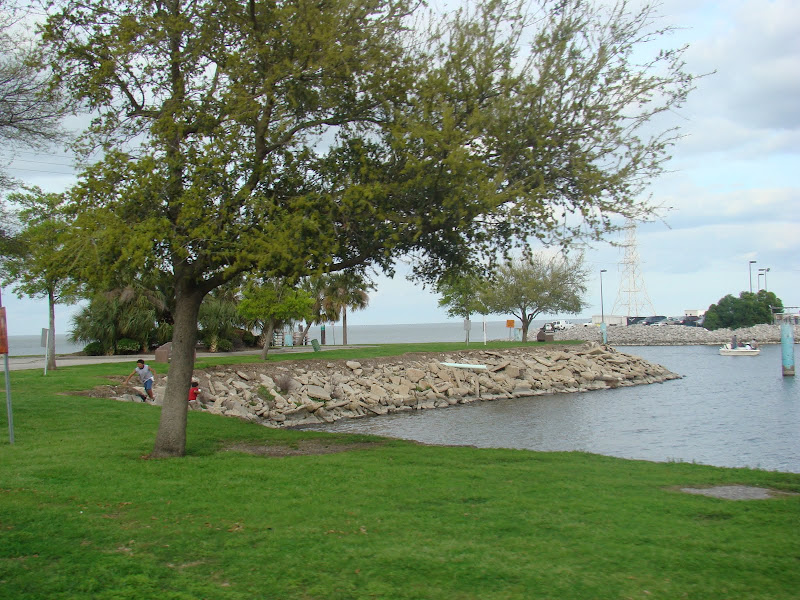 The weather was perfect, around 75 degrees so there were a lot of people around just enjoying it. 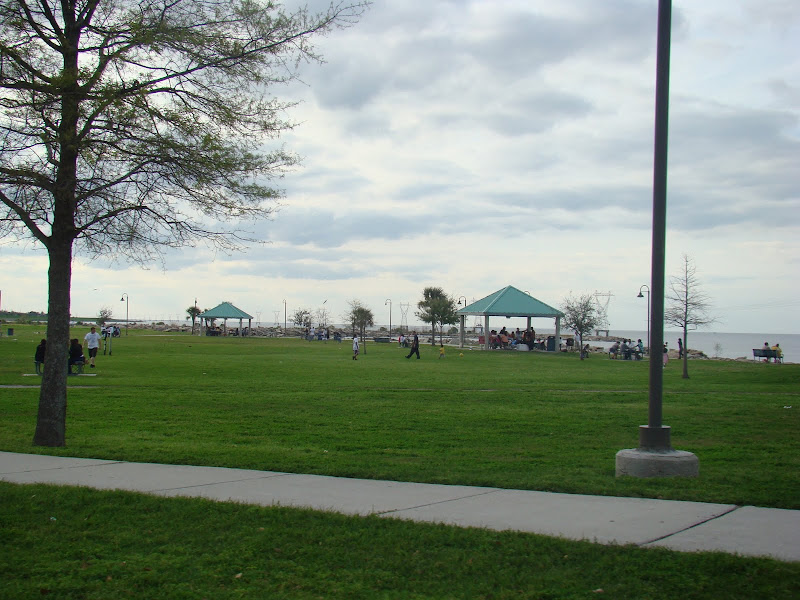 Right next to the park is Ponchartrain Center. 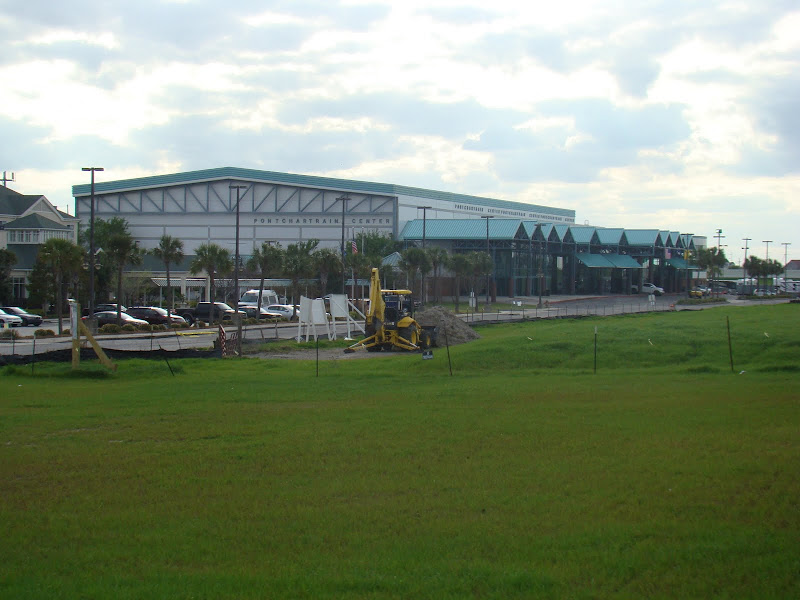 After we drove around, we checked into the closest Marriott to the airport, which is Fairfield. When I was making a reservation on line, I noticed that for another $10, we could have a jacuzzi so I took that. Was I surprised to see that the jacuzzi tub was actually in the room and not in the bathroom, lol. Well, it turned out to be really convenient cause we were able to watch TV while soaking. John could not wait to soak, after all, he drove for 3 hours, so he went in right away while I blogged. We went out for dinner afterwards and when we got back, it was my turn to soak. Perfectly relaxing just before going to bed! 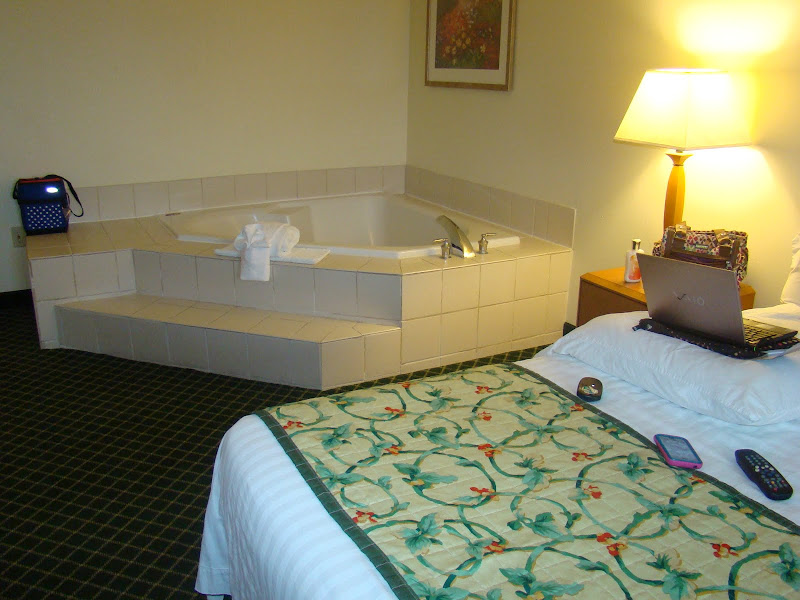 We got up very early the next morning because we did not want to be late for AJ's arrival. She is able to fly alone now but still nervous about it so we made sure we were right there waiting, when she comes out of the secured area.
And here she comes! I swear this little girl grows 2 inches every time I see her, lol, or is it just because I stopped growing? 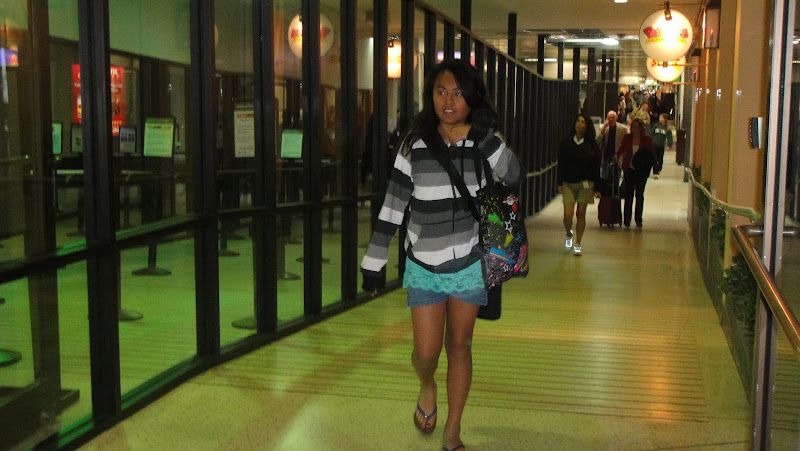 These lantern posts line the streets driving out of the airport. Aren't they pretty? 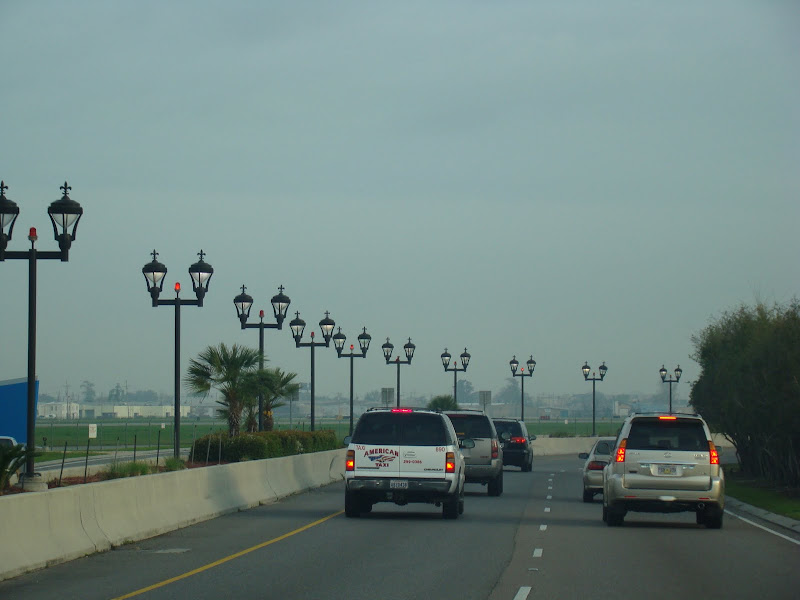 We drove to Baton Rouge to go shopping but it was still too early and most shops were still closed, but Lowe's was open. AJ napped while John watched her in the car b/c she must have left home at 5 AM to catch her early flight. I went to Lowe's and bought a hose box and some hanging planters to hang around the gazebo. And by the time I was done there, TJ Maxx which was in the same plaza was open, so I went in there also and bought a few things. 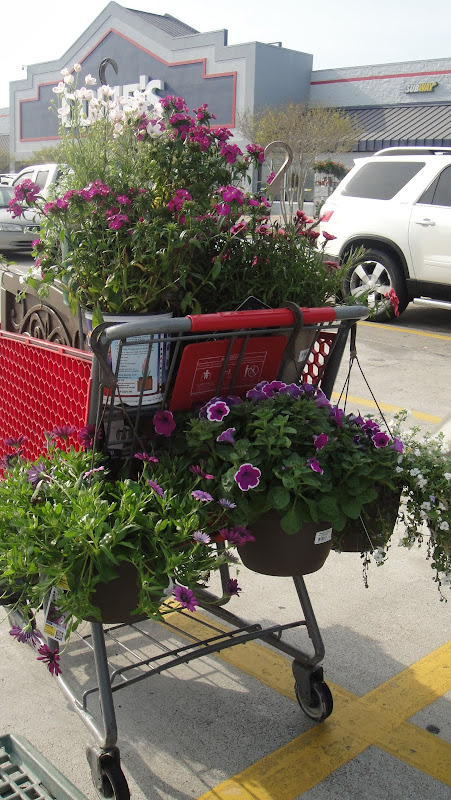 AJ wants an I Pad2 which just came out the day before, so we went to the Apple store in the mall. She is all smiles here posing for me. 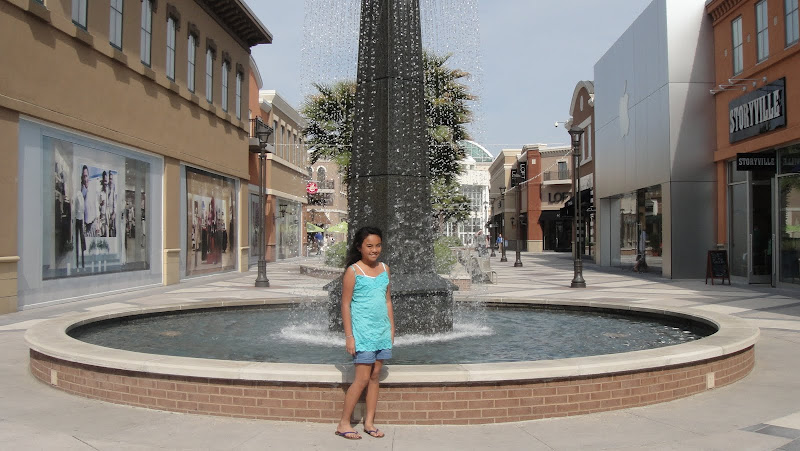 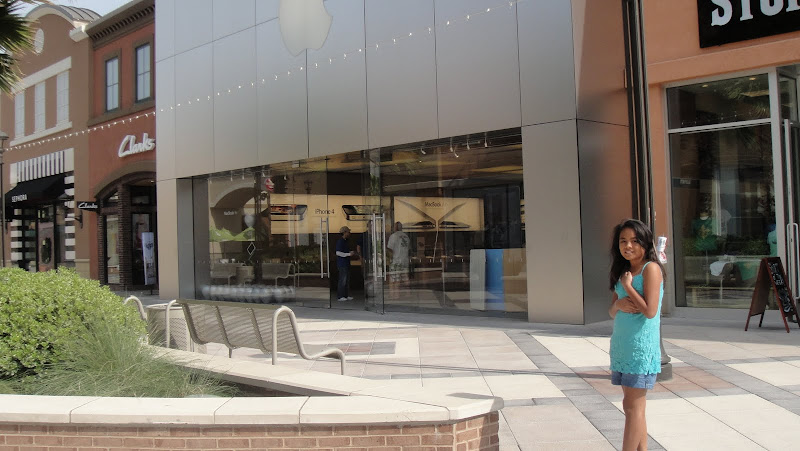 We looked at the I Pad 2's, like them but unfortunately, the store was sold out. But there was an I Pad lesson scheduled at 2 PM so we signed up for that and ate lunch first at the Sake Cafe, which was adjacent to the Apple store. 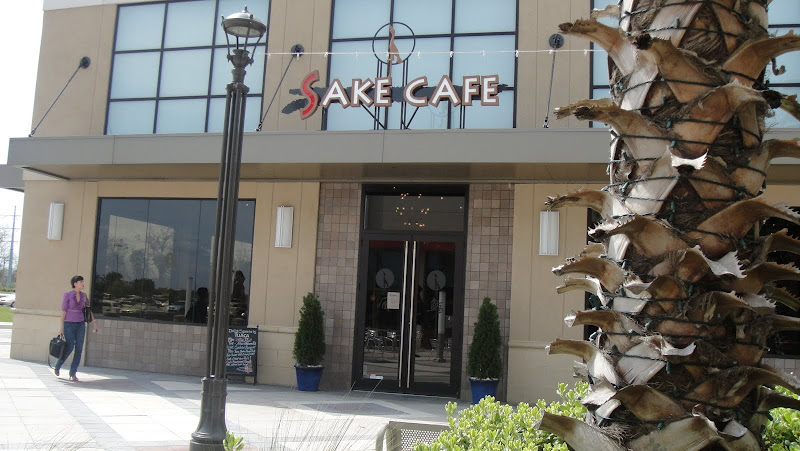 Great ambiance inside the Japanese restaurant. 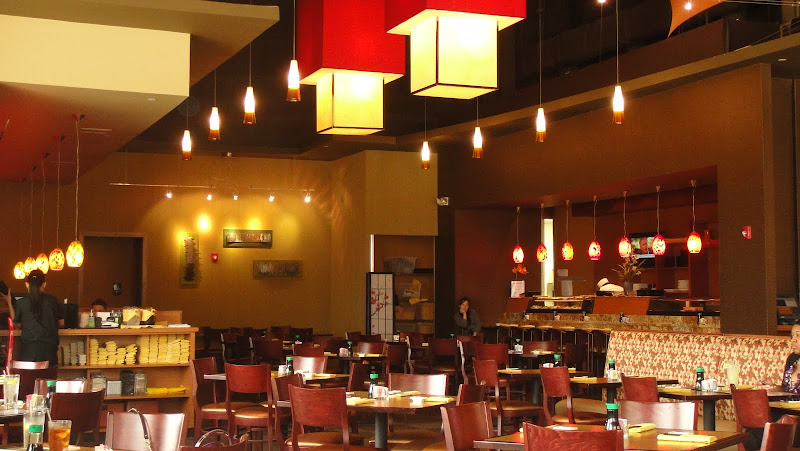 I had a salmon bento box and it was delicious. 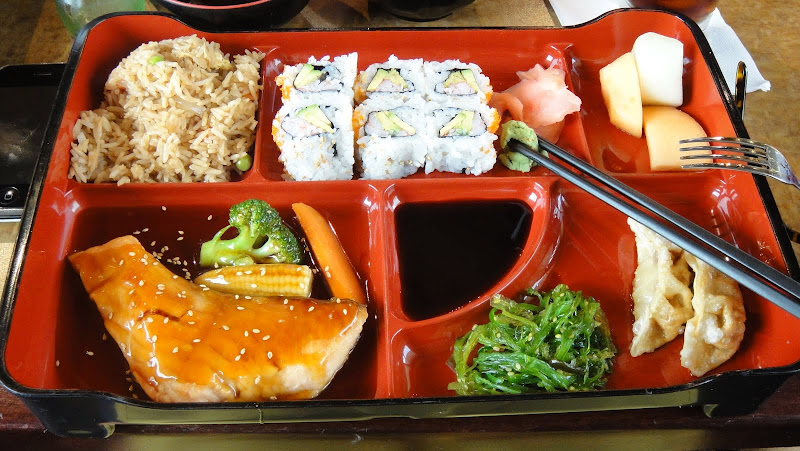 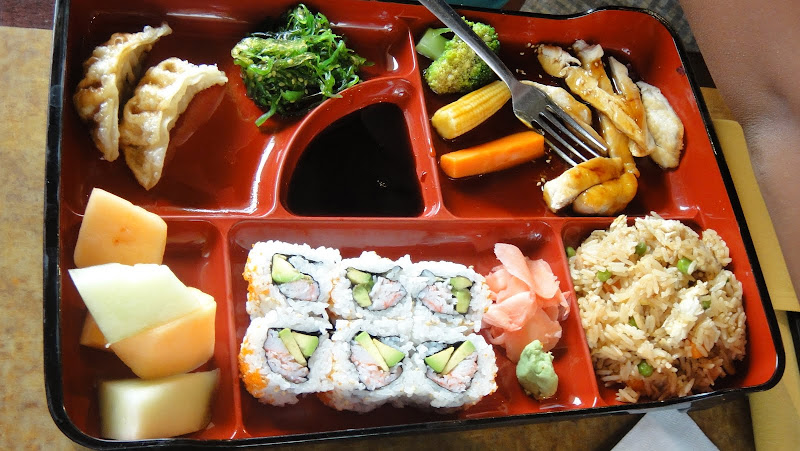 John had a special eel/salmon roll and although I did not try it, it looked really good. 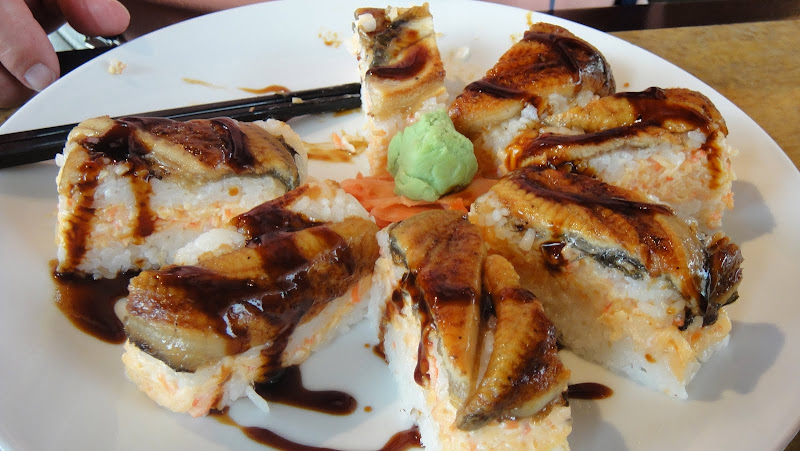 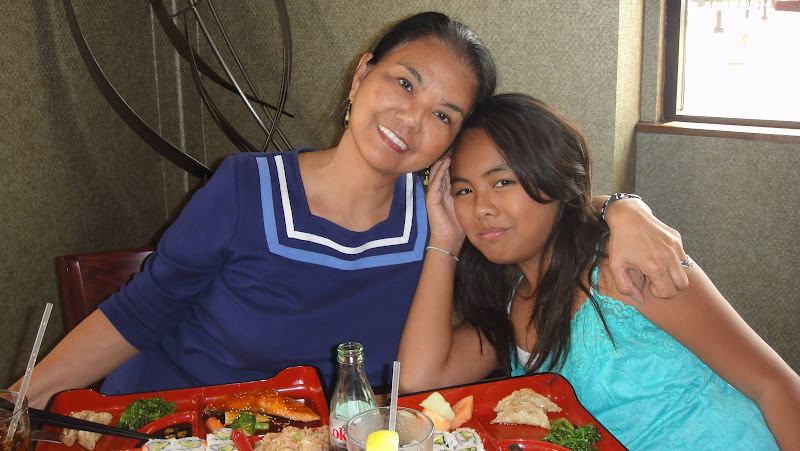 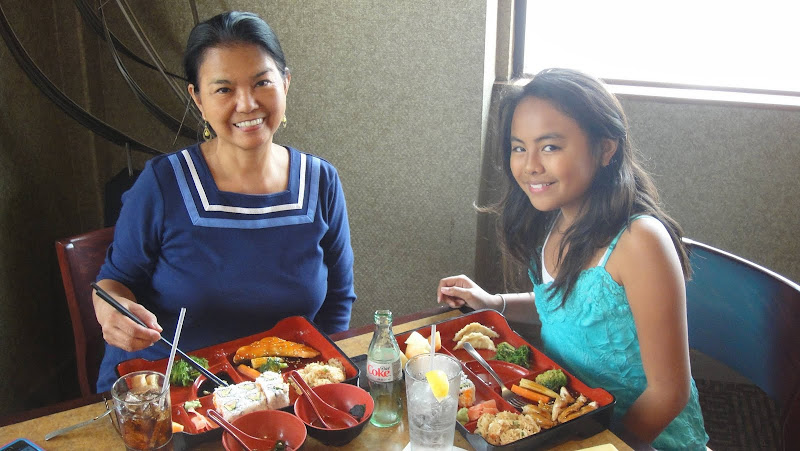 After all that activity, we headed for home and I just took pictures along the way. This was on Lake Ponchartrain. 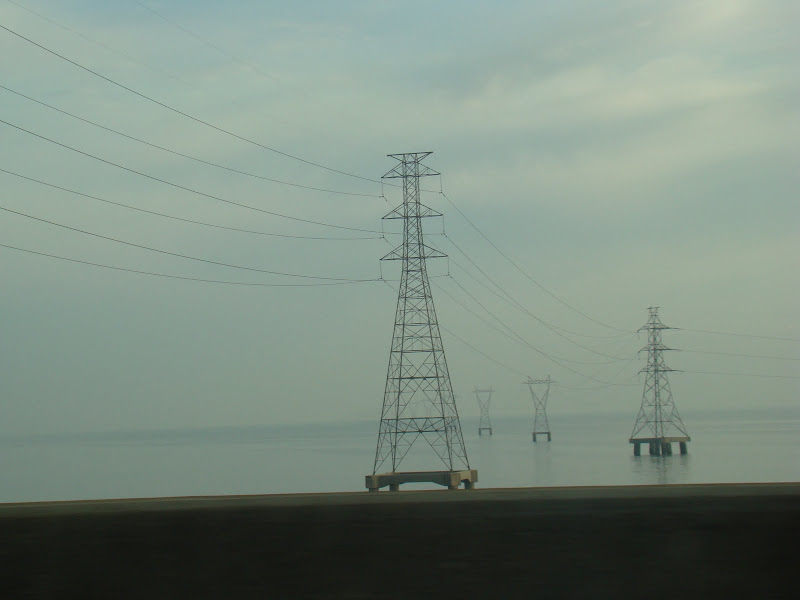 This is pretty much how it looks on the way home for over an hour from Baton Rouge. 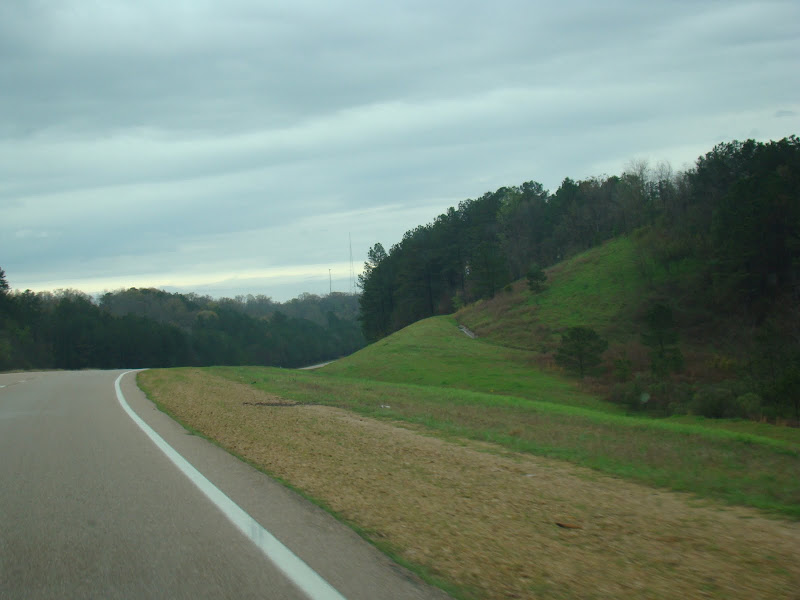 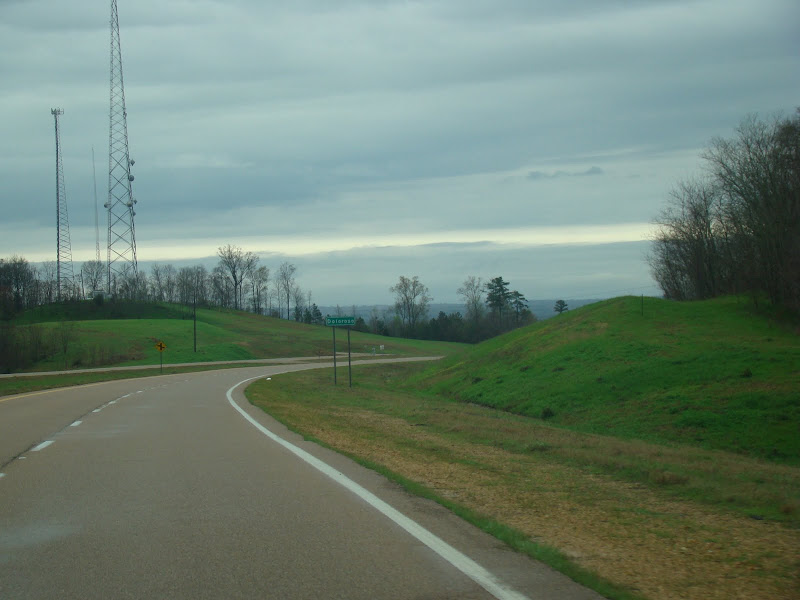 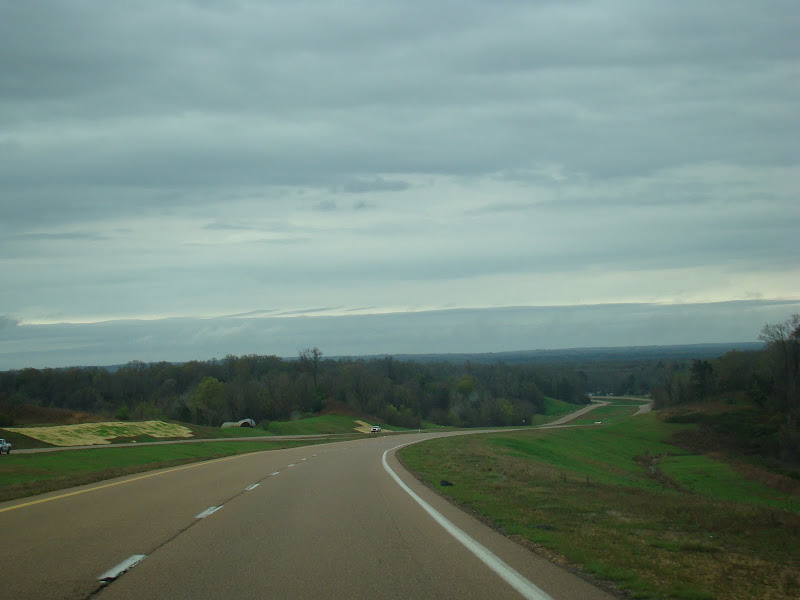 It is a pretty relaxing drive with no traffic. We passed by cotton fields, blueberry fields and a few antebellum houses. 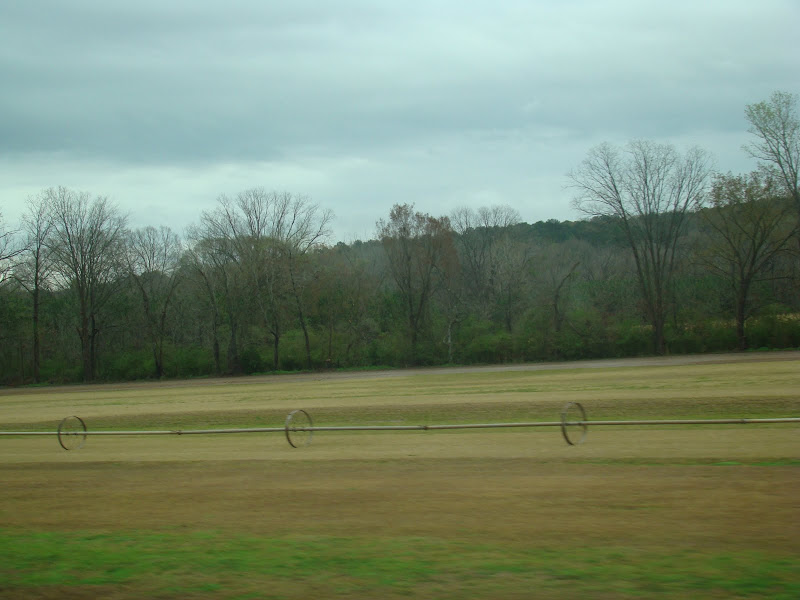 And then we were home!
Thanks for following us alone. Now I just have to keep my granddaughter busy but that' easy. We also went to Borders Book Store while in Baton Rouge and she bought a science set. As soon as we got home, she started working on experiments and mixing different stuff creating colorful water and messing up the kitchen, lol. I think she is the one who will keep be busy instead.
Thanks for stopping by and thanks to our hostesses for these memes.
Posted by xinex at 6:00 PM

Blessings to you today!
What a great time you must have had.

You look so young and pretty to be your sweet granddaughter's Grandmother!!!

So glad Spring is getting here and the flowers will bloom.

God bless,
d from homehaven on the Kansas Flint Hills

What a nice post. Looks like you guys had a lot of fun!! Your granddaughter is beautiful, but you look more like her mother not grandmother!! Martina

Thanks for sharing your trip. Enjoy your time with AJ.

Your granddaughter is a beautiful young lady, like her grandma Christine, which I agree with the other friends...you look like her mother! I love granddaughters, it's so nice you're going to spend some time with her, you're both so lucky!
I love all your pics, beautiful place and your hotel is wow! I love the jacuzzy right there in the room, never saw anything like it!
Enjoy every minute with your lovely girl and God bless you both princesses.
FABBY

Wonderful wonderful pics. Thanks for sharing your trip with us. That food looks sooooo good. Hugs

You and your granddaughter are so pretty! I hope you enjoy your special time together. I also hope you spoil her rotten :D

I know how excited you are to have AJ for a visit! Y'all are having a great time I can see. I thinbk she's getting bigger too Christine. Even I can see it online! And I didn't know you guys are only three hrs from New Orleans?! Girl I'm hopping on the next plane!...Well I'll at least wait till Aj goes home *winks* Vanna

It must be nice to have a grandaughter, all I had was sons and grandsons. Looks like you bought out the flower shop again. LOL.

Love the pics, Mom! Miss you, A.J.! Have fun with Lola! Love you both. xoxoxoxoxo

Christine, it is not your imagination - A.J. is growing up! Not only in height ~ she just looks so much older. She's beautiful! Your photos are so pretty. You and A.J. will have such a great time! laurie

Wonderful shots. Your grand daughter is gorgeous!
Have a great time together!!

Oh! Yay! Enjoy the wonderful Spring Break with your beautiful granddaughter! She is really growing!

Wow Christine, I can't believe how AJ is growing. She is such a lovely young lady. I know that you will have fun on her visit. Is it warm enough to use the pool yet? Kat

Beautiful pictures ....., but I especially love the picture of your beautiful granddaughter and beautiful you!
I betcha you all are going to have a fun week!

Always good to have family, especially little ones. RC

I've stayed in a room with a jacuzzi tub like that before. It's definitely different. It's so funny to see all the places that I shop on your blog!! Have a great week with AJ!

It looks like you all had a wonderful time. She is sure a beauty. Loved all your smiles.

The pictures are beautiful. Looks like you had a wonderful time. Your meals look delicious. Hope your visit has been fun!