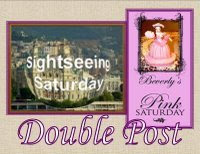 Another busy week just passed by and it's time to show off some pinks and go sightseeing. As you know, I host Sightseeing Saturday and although I do not have many participants, I intend to keep going, hopefully more people will be interested in the future and get used to linking. For those who participate, I thank you with my whole heart and I really do appreciate you. I will have Mr. Linky available below. You do not have to travel to exotic places to join. You can even just show us your hometown.
Another person whom I truly appreciate is Beverly of http://howsweetthesound.typepad.com/my_weblog/ who graciously hosts Pink Saturday week after week. Thanks, Beverly! Please visit her and her other participants and look at the many precious pinks shown in Blogland today.

Today, I would like to feature another figurine from my Lladro collection. It is called Waltz Time, reference # 4856. It was first issued in 1974 (Hey! That's when my first son was born!) and retired in 1985. They have this in glossy finish too but I have the one with a matte finish. 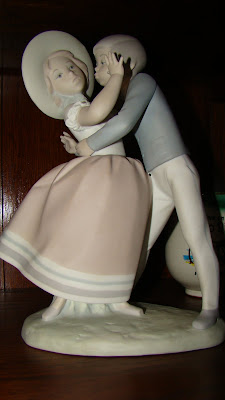 Don't you just love the boy's expression trying to steal a kiss? 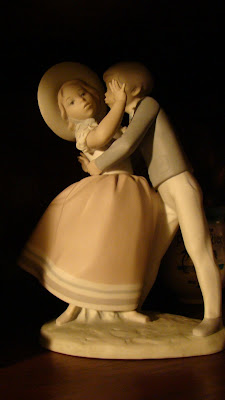 Thanks, Beverly for another fun pink day.

And of course, it is time to take a trip. If you want to participate, please copy the logo on your blog so readers will know you are a participant. Then enter your name and permalink on the spaces below, after your post is published.


And now, for a little education. You probably heard about Thomas Edison, a great American inventor, scientist and being the founder of General Electric, is a talented businessman. He was born on Feb. 11, 1847 and though left us on Oct. 18, 1931, he surely cannot be forgotten for all his many useful inventions that continues to influence our lives today. That of course, includes the phonograph (remember the gramophones?), motion picture camera, stock-ticker, and of course, the light bulb and many others. Edison did not invent the first electric light bulb, but instead invented the first commercially practical incandescent light. He has 1,093 US patents in his name, not to mention many in UK, France and Germany also.

In school, Edison's mind always wandered and his teacher called him "addled", which ended his 3 months of official schooling. His mom who truly believed in him home schooled him from then on. He developed hearing problems from scarlet fever and untreated ear infections at an early age.

There is so much to read about him so please go to http://en.wikipedia.org/wiki/Thomas_Edison if you want to learn more.

But for now, I would like to show you his winter retreat in Fort Myers, FL. My youngest daughter, Tina, lives in Cape Coral with his family, which is about 20 minutes away so on one of our visits, we decided to tour and learn more about Thomas Edison. We did not go in the house so this is all I can show you. He bought property in Fort Myers in 1885 and you will still see the palm trees that he planted lining the streets. 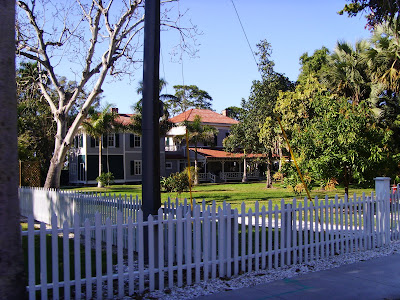 But, we decided to go visit his Botanic Research laboratory. Outside the lab, you will see an abundance of humongous Banyan trees. The tree was given to Edison by Harvey Firestone after he visited India and it was only 4 ft at the time. Now it is the largest in the continental US, third in the world and is a Florida Champion tree. Instead of growing underground, the banyan tree's roots sprout from branches, strengthens as they take in water and food, dropping on the ground to form a sort of prop for the linb. Edison experimented with different trees and plants for use as rubber and filaments. 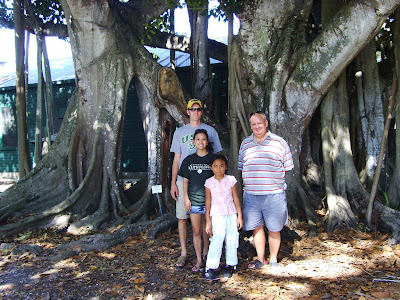 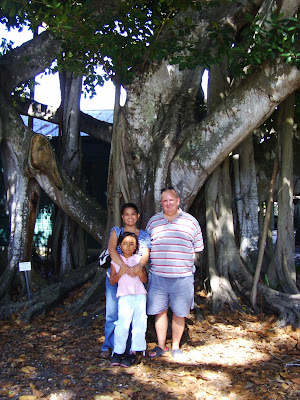 This resembles an elephant with its trunk. 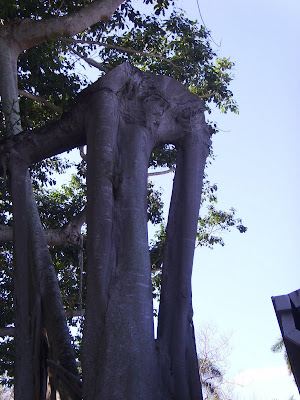 I thought I would hold on to Mr. Edison hoping for some of his intelligence to rub off on me. 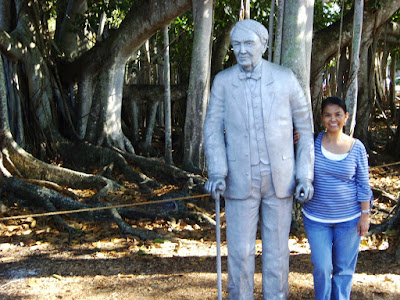 Edision, Firestone and Henry Ford were good friends. This is the 1916 Model T Touring car that Henry Ford gave as a present to Edison. 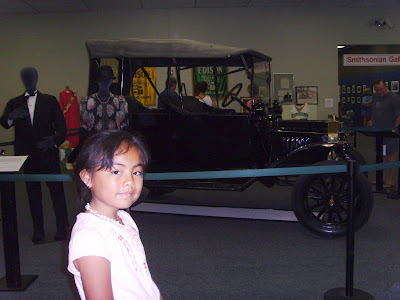 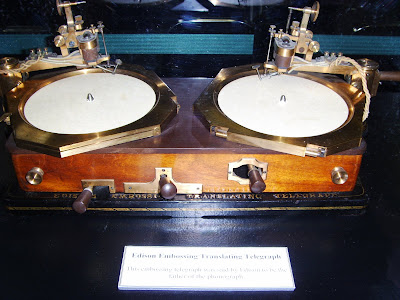 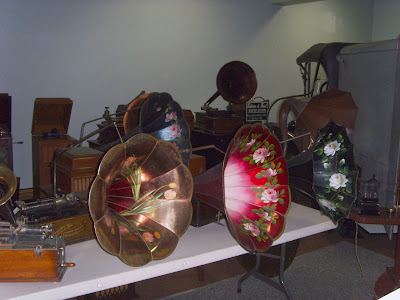 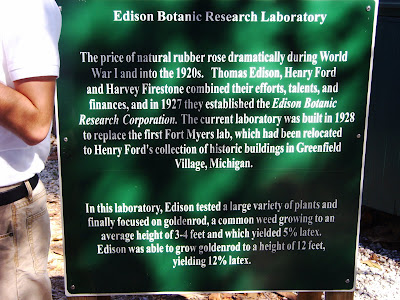 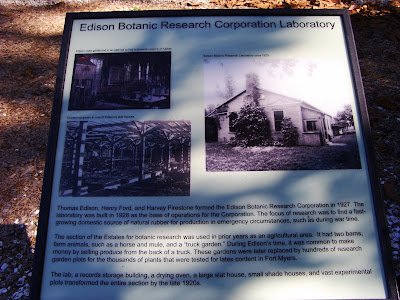 Thomas Edison was a workaholic. He worked all the time so he added a cot by his desk in the lab so he can just "cat nap" there whenever he gets tired. He is quoted as having said, "I owe my success to the fact that I never had a clock in my workroom." He also said that his deafness was an asset, explaining that it allowed him to work with less distraction and to sleep deeply, undisturbed by outside sounds. 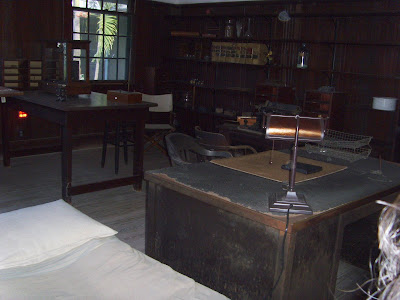 Here are some of the chemicals found in his lab. 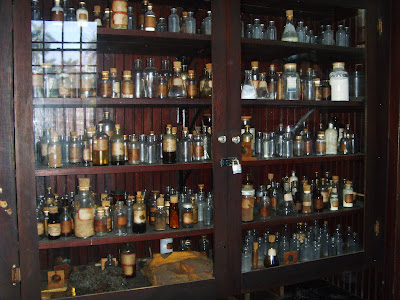 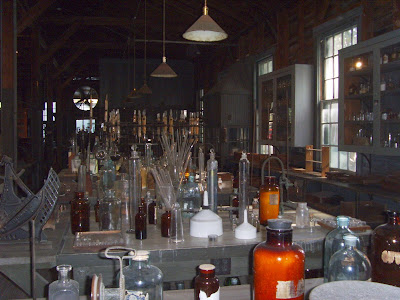 After we left the Botanic Research Laboratory, we just drove and walked around Fort Myers, which is a very charming town. I was happy cause I had both grandkids with me. I am sure most of you already know AJ. She travels with us a lot. 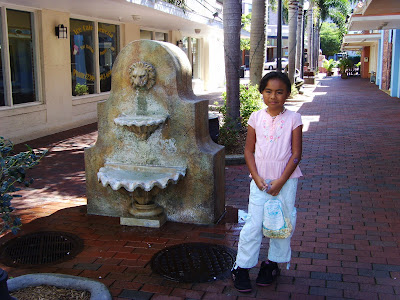 And look at Brendan, Tina's only son (but one more on the way now). He has always been
happy and always smiling even when he was a baby. 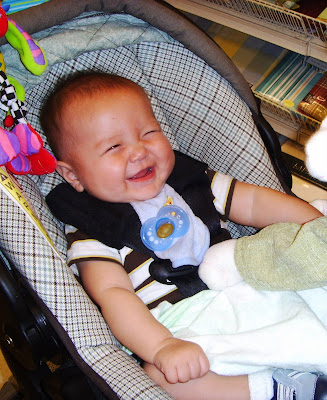 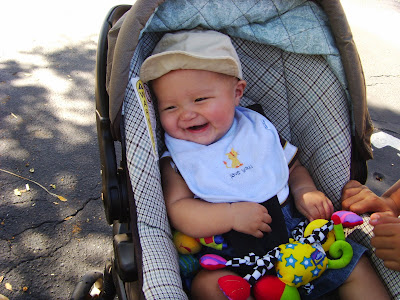 I hope you enjoyed the tour with a little education. Come back again next week for another travelogue.
Posted by xinex at 6:45 PM

Always interesting!! I will plan to link to you on one of these Saturdays soon, as we have taken the grand kids to a couple of fun places this summer. Have a great weekend. Sally

Christine, as usual your trips are your pictures are always so interesting. The trees are fascinating. I love to see pictures of AJ and now the pictures of Brendan are equally as cute. He really is a cute smiling baby. Hugs, Marty

It looks like it was a fascinating tour. I love all the things in his lab, how neat was that! The trees were neat too. I don't think I've seen Mr. Brendan before, he was absolutely adorable little guy! Happy Pink Day and have a great weekend!

Thank you for sharing your day with us, Christine. I didn't realize you were hosting this event ... hope to participate in the very near future!

I've visited the Edison house before and found it worth the trip. I love your Lladro!

Hubby is from Fort Myers and in all our times going there, we've NEVER gone to any of the Edison stuff - - - except the Edison Mall, which of course isn't Edison Stuff at all.


Happy Pink Saturday to you!

Cute smiles are contagious ;-)
Sweet waltzing couple and what a fun trip through history. And those trees are incredible. Thanks for the tour.

Thanks for the tour. I love museum.
Nice family pictures!

Your figurine is so beautiful! Brenden is such a little cutie pie! I do love his smile.

Your trips are always so amazing Christine. Your blog name really is perfect.

Have a wonderul weekend.
~Melissa :)

Thanks for taking us along on your adventure!
Bon Week-end!
Fifi

Christine, Two things -well okay more than two things. First things first I wanted to tell you that I received an e-mail from HGTV gardening and it featured 7 porches that they love and as I was clicking through the porches I said - I recognize this porch it's Christine's! You are featured today! Go check it out! That's so cool! Now, Brendan is so cute - that smile is something else...and Jacob would love, love, love to visit Edison's home. He loves anything Edison. This would be one of his ultimate vacation spots. We just returned from the Mississippi River headwaters and I will link up with you next Saturday. ~ Robyn

1st time here, really enjoyed it! I'm in Mississippi too!

It's always fun "traveling " with you :o)

How blessed and fun for all of you to be able to travel together to so many great places :o)

and how sweet is Brendan!

Wow - sounds like a fun educational tour! Thanks for the show...

Oh Christine! Your Lladro figurine is just gorgeous! And I must say I just squealed when I saw where you were taking us! I must have been about AJ's age when I went there as a little girl and it all looks much the same...except that tree! It was big, but now it is humongous!! I saw my first angel trumpet plant there. We went to Ft. Myers Beach every summer when I was growing up. I loved it. It was a little country beach then. My dad would take us on his boat to Sanibel Island to collect shells because there was no bridge then. We found worlds of them...all kinds. Thanks for the pleasant memories. Hope your weekend is happy!...hugs...Debbie

Oh dear! I was so excited about Ft. Myers that I quit too soon and didn't say what cuties your grandchildren are! AJ of course, I have seen many times since you always so sweet to include her on your trips. But I haven't seen Brendan in a while...such a happy baby!!

Christine, great post for SS! I'm home now but both of our comps, my laptop and the PC are just nutty.

I can blog fine on my fam's site, but I can't seem to do anything with my tablescaping blog, picture wise. The PC's temperamental and doesn't always respond to clicking over or both slow down like I have all the time in the world. grrrr!

I'm glad to be able to visit today. It's been frustrating waiting for websites to come on.

The hubby said not to blog too much or do visits for now, but you know I can't stay away. LOL

Cross your fingers with me, dear and hopefully hubby will have a "eureka" moment and fix it with one finger snap! ;-)

Every time I see your Llardos, I want to start collecting them - like I need another collection. That is a beautiful one. Very interesting trip. AJ looks so pretty, and Brenden always makes me just want to pick him up and squeeze him. You have such pretty grandchildren. I know she hopes her next one is just as happy as this one! laurie

You have a wonderful collection posted here Christine. You have a nice sense of art surely. I may learn some from you. Thanks. Toddler Crafts Susan