My Mom and I Thank You All So Much!

I was trying to leave an individual comment for everyone who said prayers for my mom but I don't think I will ever catch up so I thought of just posting a blog about the accident and thank you all for the prayers through here.
It was really scary, I thought I would lose my beloved mom. John and I bought a round dining table from an antique store last week in Woodville, which I could use for tablescaping in the store but we do not own a truck. So, I asked Mitch, our handyman/electrician who does a lot of work for us at home to help me. The plan was that I would leave my mom at John's clinic while Mitch and I picked up the tables (I bought an end table too) but Mitch brought his bigger truck and ma could fit and I know how much she loves and enjoys rides so I took her with us.
When we got to the store, I left her buckled in the middle seat and told her to just stay there while I took care of the tables. The truck was parked right in front of the store so I could really see her through the glass window. While a guy who was also shopping was telling me about another table there, my mom started calling my name. I told her I am almost done and that I would be right back. All of a sudden, the guy I was talking to said my mom is on the ground so I ran out and sure enough she was lying on the ground by the truck with blood on her head and on the ground. Mitch picked her up and she climbed back on the truck with no problem and was explaining why she got out, she said she had to pee. She had a big cut at the back of her head which bled a lot. I applied pressure and called John and he told me to bring her straight home and he will dress the wound which he did as fast as he could. But the bleeding would not stop so we called 911.
The ambulance came right away and took her to the hospital where John works, less than 5 minutes away. 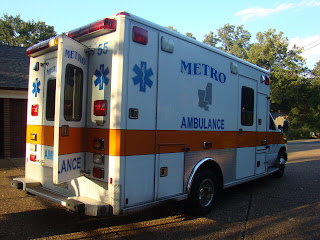 John rode with her in the ambulance and continued to apply pressure on her cut while I followed by car. 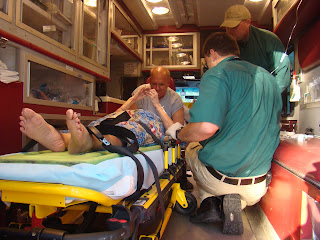 They did a CT scan which showed a clot in the frontal right part of the brain. The ER doctor decided to have her transported by ambulance to Jackson, a hospital 2 and half hr. away because we have no neuro surgeon in town and he thought they might have to perform surgery on her. John and I rode in the ambulance with her and John was trying to prepare me in case she does not make it because the head was bleeding pretty bad and the hospital is so far. He sutured the wound while we were waiting for the ambulance and the bleeding actually slowed down quite a bit.
I prayed all the way to the hospital, called all my brothers and sisters and all my kids and told them to pray also.
I asked you all to pray also and I want you to know that all the prayers worked because she is home now with me. We came home today. 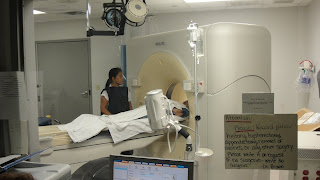 We were all amazed because hitting her head and her hips (which was pretty bruised also) at the age of 92, she did not fracture her skull or break her hips or any other bone. In fact, the reason I was so calm in the truck with her after the accident was because she was so alert and did not complain of any pain.

Here she was yesterday while in ICU. She was transfered to a regular floor the next day and was released today after all tests done came out normal and repeat CT scan did not show the clot getting any bigger. The doctors said (at least 6 neurologists saw her) that they did not need to operate. Because of her age, the size of her brain have shrunk a lot leaving a lot of room around it and the clot will eventually just disintegrate. 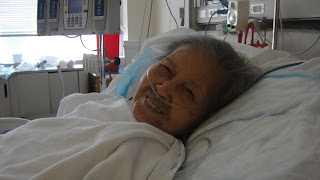 I want to thank you all again for all the prayers. I am very grateful from the bottom of my heart and I am just so happy to have my mom back at home again with her lovely smile.

Email ThisBlogThis!Share to TwitterShare to FacebookShare to Pinterest
Labels: Family

Sorry I didn't see this sooner! How scary! Thank goodness she is okay now! Hope you are okay as well.

So glad everything turned out so well, cherish her.

Thank you Lord for answered prayers! So glad that your mom is doing so well!

Wow Christine! I missed this, earlier! I just said a prayer for your amazing mother. It is good to know she is home with you now. What a scary time for her, you and your family.

Just wanted to let you know that I have shared this post with my followers today on my Fearless Friday post. ((hugs))

Oh Christine, I'm so happy that you Mom is home and doing well. She is an amazing woman! Hugs and blessings to you and your family. Kat

Christine, I am so glad your mother is doing well and so sorry I am late hearing about this. For some reason I keep missing your posts on my sidebar. Very strange. Anyway I know you were very scared and worried and I am glad everything is fine. Wow 92 and nothing broke. She has some very strong bones.

Hi, I've come over from Fearless Friday and I just wanted to let you know that I will be praying for your mother.

Hello Christine, I'm glad your mom is at home now and am also hoping for her quick recovery. It's nice to see her smile even when she's still at the hospital bed.

Give my hugs to her/Dredd

Oh, Christine! Thank God your mom is okay! That was so scary, I know. I've been there many times with my mom. I know you're so happy!!
Blessings,
Shelia ;)

Oh Christine, what a wonderful answer to prayer. I know you were so scared. Your mom is such a treasure, and I am thrilled she is able to be at home. God Bless. I will continue to pray for a total recovery. Hugs, Marty

So glad to hear she is ok now. That is so scary.

Christine, I woke up thinking of your Mom and I am so glad she is home with you. Bless you both, I've got happy tears for you..Take care sweetie. Love, Cindy

Oh! Christine! I am sorry to hear of your mom's fall, injuries and what you all went through! It is so good to hear that she is doing better and at home. And what a sweet smile, even when she had to be in ICU!

Blessings & Aloha!
After coming back from our visit with my hubby's family, it was straight back to work. But yay, I had yesterday and today off from work, so I hope to get caught up on some blog reading. This next thing is very, very trivial in comparison, but I also wanted to let you know that one of your comments was drawn for one of the 20% certificate giveaways towards the art that I do. At your convenience, please come by or let me know if you are interested.

I am so relieved that your mom is okay. What an incredible story. John was the real hero of the day. I will keep saying repairs that your mom makes a full recovery.

Christine,
I did not know about this accident before today because I have been so busy and not blogging lately.
I am so releived to here that your sweet Mom is okay. I will be praying that she recovers quickly and is back to herself before you know it.
I know how upset you had to have been so I will say a special prayer for you, dear Christine!!

Christine, I am so glad your mother is better. Prayer does work. I will continue to pray for her recovery. No need to answer this comment you have enough on your plate. i will be checking back for a public update. Take care of yourself and get enough rest.

OH, Christine! How terrifying! I have been without a computer for several days, and I am just now checking in. I just prayed for your mother. I am SO relieved for you and for her that she is going to be okay. Please know I am thinking of you and sending much love your way...

Nothing better then answered prayers. I am so happy that she is doing well. What a scare!

Oh Christine, I am so sorry! I have tears in my eyes. The thought of your sweet, brave tiny mother, talking to you while she rode in the truck to get help from John, just made me so sad. Bless her heart, and bless your heart. I know that had to be so scary for you to see her on the ground with all of that blood and then to have to have her taken by ambulance to Jackson. I'm so glad she is doing so well. You are right, as frail as she is, it's a miracle that she didn't break any bones! laurie

Christine, I just found out about your mom- I am so sorry! I have been so busy this week I haven't checked on any of my blogs. I am so thankful you had John with you! Thank goodness your mom is doing better.

Oh! My mama is nearly 96, and is in a nursing home--because she has had so many falls. I think she's about to give up, and it's so hard. Knowing when to push and when to not push is one of my biggest problems. But--I don't want to lose her--yet--I know it's going to happen sooner or later--one of us will go!
So thankful to see your mom is still okay! BLESSINGS.

What fabulous news!! GOD IS GOOD!!

I'm glad you posted this about your sweet mother! Poor dear! I'm so glad to hear she is doing better now! Fortunately your husband is a doctor and helped her!

God's blessings to her!

I'm sorry I was late in knowing this news last week and that I didn't see this post when it actually happened! But I was praying when I did find out! Oh, you must have been such a nervous wreck. I have gone through things with my mother too, when she was alive, and it is so stressful. I am glad the did not have to operate. Thank God for that. I will continue to pray for her.
Blessings,
Gloria xxoo